Can Israel influence the 'day after' in Syria?

Israeli experts fear that the Russian pullout of Syria will provide Hezbollah with influence along the border of the Golan Heights. 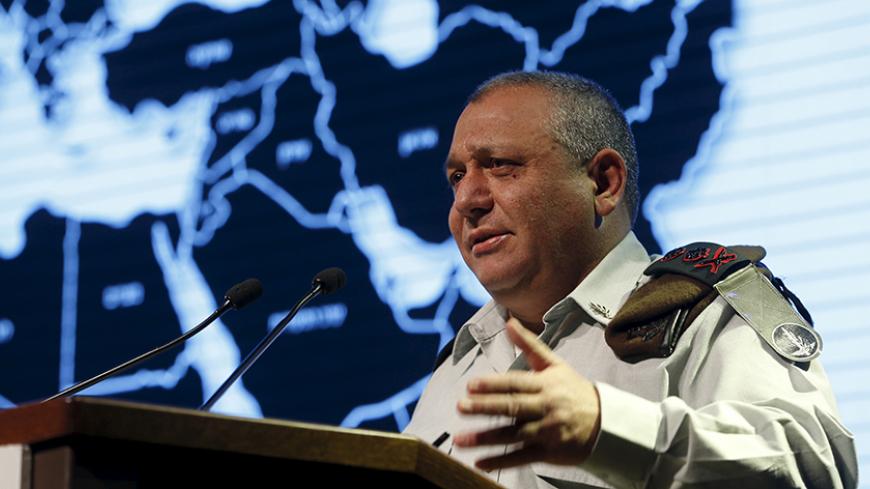 The day after President Vladimir Putin’s March 14 surprise announcement of Russia’s intention to withdraw its army from Syria, Lt. Gen. Gadi Eizenkot, the Israel Defense Forces (IDF) chief of staff, went before the Knesset’s Foreign Affairs and Defense Committee and reportedly admitted, “We had no preliminary information prior to the Russian announcement last night about reducing involvement, just as others did not.” According to the chief of staff, Israel had, however, preliminary knowledge of Russia’s earlier decision regarding the beginning of its military involvement in Syria. “We had signs and reports received by Military Intelligence,” Eizenkot said.

The chief of staff's reference to “others” was evidently hinting that the United States had also been kept in the dark, unaware of Putin’s intention to leave Syria. Putin’s announcement was delivered while Israeli Defense Minister Moshe Ya’alon was at a work meeting with his US counterpart, Ashton Carter, at the Pentagon. It is believed that Eizenkot was told by the entourage accompanying Ya'alon in Washington that the Americans had also been caught by surprise.

Eizenkot added that according to Israel’s assessment, the Russian withdrawal will be carried out gradually, and even after its completion, there will still be quite a few Russian forces in Syria. Moscow will maintain its two main bases there: the naval base in Tartus and the aerial base in Latakia. The IDF believes that the Russian S-400 missile battery that provides an almost hermetically sealed umbrella over the Russians in the Syrian skies will remain in place as a warning to Turkey and other power brokers in the region.

The best of Israel’s security brains, including the intelligence branches, are now examining the ramifications of the Russian withdrawal. Another scenario is also being probed, however — that the withdrawal may be a public relations move by Putin and actually involve an insignificant thinning of forces, but with continued military involvement on a daily basis.

“Putin succeeded in misleading the world several times in recent years. We never know what he is really planning,” said a highly placed Israeli source to Al-Monitor speaking on condition of anonymity. “Don’t forget that the Russians also denied their military involvement in Syria at first, until their cargo planes started landing in Latakia. So far the dust hasn’t settled, and no one knows what Putin really wants.”

In an amazing coincidence for Israel, President Reuven Rivlin left for an official state visit to Moscow, to visit Putin, on March 16 — some 48 hours after the Russian announcement. Before his departure, the president received hasty, urgent briefings from top-level defense sources and even spoke to Prime Minister Benjamin Netanyahu. Thus, Rivlin became the point of contact between Putin and a worried Israel. Rivlin is expected to present conclusive evidence to the Russian president regarding the transfer of high-quality Russian weapons from Iran to Hezbollah and other intelligence information.

Rivlin’s message to Putin will be loud and clear: There must be no “Syrian arrangement” that strengthens Iran and Hezbollah. Iran must not establish hegemony over Syria. Shiite terror endangers the world, including Russia, no less than Sunni jihad does.

For quite a while, discussions have been taking place in Israel regarding the “day after” an arrangement is agreed to on Syria. Israel’s decision-makers have taken into account the possibility that the Russian declaration was the result of contacts and agreements between Putin and US President Barack Obama regarding the partition of Syria into segments. In such a case, said a senior Israeli defense figure to Al-Monitor who requested anonymity, “We must not agree to a new delineation of lines of confrontation and battlefronts. Israel needs to do everything it can to avert the possibility of Hezbollah and Iran’s Revolutionary Guards receiving a permanent presence along the Golan Heights border. That needs to be a clear Israeli redline.”

When asked what Israel would need to do if this demand is rejected within the framework of an arrangement, the source responded, “Everything, including the use of force. Israel has succeeded in remaining outside the bloody struggle in Syria and has cautiously maneuvered between the sides. But at the moment of truth, we must not lose our bearings. We will not accept the opening of a second front against Israel in the Golan. That is simply intolerable.”

One of Israel's top experts on Russia is Yaakov Kedmi (Kazakov), who had once headed “Nativ,” a covert Israeli organization tasked with connecting to Soviet Jews behind the Iron Curtain, before the fall of Soviet Russia. Kedmi told Al-Monitor, “Putin entered Syria to build a base for the Russian navy, which is attempting to improve its balance of power vis-a-vis the [US] Sixth Fleet in the Mediterranean Sea, and at the same time, to stabilize [Syrian President Bashar al-] Assad’s regime, to prevent him from collapsing. Putin achieved both of these results.”

Kedmi is not convinced that the Russians are really leaving. “It seems to me that most of the commentators did not correctly understand Putin’s announcement,” he said. “The Russian navy is remaining in Tartus. More than half of the fighter planes are remaining in Latakia. The special units that defend these bases are also remaining. The Russian air force will continue to assist Assad in his attacks on the rebels. The S-400 missile batteries are remaining. True, some of the planes, mainly the Sukhoi Su-34s, are returning to Russia, but the advisers to the Syrian army are remaining, from the battalion level to the General Staff, as are the electronic systems, logistics, the RPVs [unmanned aircrafts] and assault helicopters. This is not an exit, but a certain thinning [of forces].”

According to Kedmi, the Russians did a “situation evaluation” and came to the conclusion that they should be able to thin their forces. “The scope of Russian aerial activity decreased by two-thirds after the cease-fire [Feb. 27], while simultaneously the scope of Syrian air force sorties has risen to about 30 sorties a day, at least. The quality of the Syrian sorties has also risen. The number of main battlefronts has gone down, from 12 to six, and the Russians came to the conclusion that the Syrians are standing on their own two feet now, by themselves. And that’s the whole story.”

Not everyone in the Israeli defense establishment agrees with this analysis. On March 15, Alexey Drobinin, Russia's deputy ambassador to Israel, said, “Iran and Hezbollah are not allies of ours … Russia well understands Israel’s interests and national security, also in the Syrian sphere.” This, however, did not really reassure the establishment. Israel continues to vigilantly observe what is taking place and for the first time is considering whether to increase its involvement. This would be to wield some kind of influence on the “day after,” mainly along the length of the Golan border.