Israel is worried that the Russian submarine now patrolling near the Syrian coast will collect intelligence data on Israel, and fears Moscow’s Syrian adventure could drag on for a long time. 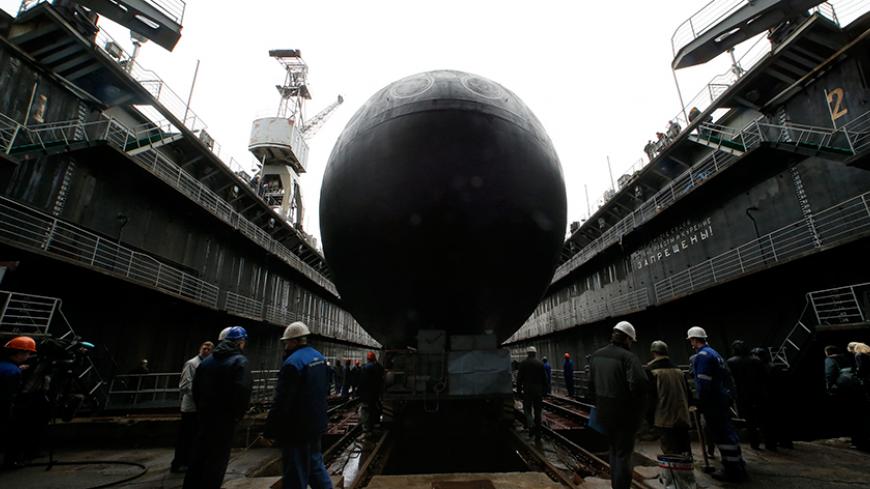 Russia's newest surprise from its bag of tricks in Syria has come from deep in the water: It's the Rostov-on-Don submarine that, according to Russian Defense Minister Sergei Shoigu, has begun to cruise the eastern Mediterranean Sea along the coasts of Syria, Lebanon and Israel. The submarine is almost undetectable, armed with a large number of cruise missiles and regarded as a sophisticated, almost invisible intelligence-gathering vehicle. The Rostov-on-Don has already fired cruise missiles toward Islamic State targets in Syria, but it is the submarine's other capabilities that are causing far greater concern to other players in the region, such as Israel.

It is still unclear what the ratcheting up of the combined efforts of Russia and Iran will achieve on the Syrian battlefield. A Dec. 10 Bloomberg News article stated that the Iranians have begun withdrawing their forces from Syria after heavy losses there, including the wounding of Gen. Qasem Soleimani. The source of the news tidbit was, evidently, American intelligence that discovered convoys of Iranian fighters returning to the land of the ayatollahs, their tails between their legs.

This week, Israeli intelligence sources denied this information. “We are not convinced that this points to desertion of the battleground,” one source told Al-Monitor on condition of anonymity. “There is movement of Revolutionary Guard soldiers within Syria, and it is actually unclear whether they are leaving or not. Perhaps it is redeployment. It is too early to say that Iran is giving up on Syria, though. In light of their meager results so far, anything is possible.”

In October, a record number of 7,000 elite Iranian Islamic Revolutionary Guard Corps soldiers fought together with Hezbollah and Syrian President Bashar al-Assad against the rebels in Syria. They were recently joined by the Russians. This coalition set far-reaching goals for itself: stabilization of Assad’s regime, ensuring his continued rule and enlarging the regions he controls by retaking a number of key cities, including Idlib.

These goals were not achieved. Israeli Defense Minister Moshe (Bogie) Ya’alon, in an address to the Saban Forum at the beginning of December, said that this campaign has failed so far. According to Ya’alon, the reasons for this failure are the “incompetence of the Syrian army and the lack of determination of the Iranian Revolutionary Guard Corps.”

Israel is convinced that Russian President Vladimir Putin does not face a jaunty walk in the Syrian park, and that his Syrian adventure may morph into a contemporary version of Afghanistan, where so much Soviet blood was shed that the country was forced to slink away. A very highly placed Israeli officer told Al-Monitor on condition of anonymity only a short time after the start of Russia’s involvement in Syria that “Syria can become Russia’s Vietnam.”

One way or another, the worry level is rising in Israel’s security circles and decision-making echelons in light of the continued concentration of Russian resources on the northern front. This reality could possibly continue to restrict the Israel Defense Forces' control and freedom of action in those regions.

“The new submarine Putin brought here greatly upgrades Russian intelligence-gathering capabilities against Israel as well,” said a senior military Israeli source who spoke to Al-Monitor on condition of anonymity. Meanwhile, a diplomatic source who also asked that his name not be divulged told Al-Monitor a week ago, “The Russian S-400 batteries completely expose the entire territory of the State of Israel to the Russians. All Israeli combat planes taking off, from the Uvda air base in the Negev to the military airports in Israel’s north, are immediately picked up by the Russian radar system. This system has additional capabilities as well. We are less inclined to worry over possible military friction with the Russians, who do not constitute a direct military threat to Israel. Instead, we are more concerned that the Russians will transfer sensitive intelligence that they gather to agents that are hostile to Israel.”

Israeli Chief of Staff Lt. Gen. Gadi Eizenkot said in a recent press briefing, “It is impossible to defeat the Islamic State from the air; you need strong ground forces to accomplish that.” This fact has been internalized by the West as well, though the United States remains firm in its policy of not sending significant forces into Syria, with the exception of special low-profile units taking action against IS.

“We have never seen anything like this before,” a senior Western military source admitted to Al-Monitor on condition of anonymity at the beginning of this month. “We are talking about 40,000 fighters from 100 countries who are flowing to the romantic magnet called the ‘Islamic Caliphate.’ Yet no one really knows the reasons behind this phenomenon, and what causes those young fighters to leave their rather comfortable Western lives behind them.” Almost all the experts hold that in order to fight this phenomenon, its keystone must be quashed upfront: the caliphate that IS established on large tracts of Iraq and Syria.

The series of tremendous IS successes recently, including the terror attack in Paris on Nov. 13 and the downing of the Russian plane over the Sinai Peninsula on Oct. 31, shook up the coalition and created the current sense of emergency. The Russians have greatly intensified their airstrikes against IS. Until its plane was downed, only 5% of Russia’s aerial strikes in Syria were directed against IS. But subsequently, 30% of the attacks are directed against IS, according to American intelligence, and this figure is rising. The problem is that air attacks will not bring about the hoped-for results.

“In order to defeat IS, you need to get their caliphate out of their hands," said a high-level US source on condition of anonymity. "You need to win them on the ground. That is the only thing that will put an end to the romanticization that attracts thousands of youths to that place. The difference between IS and al-Qaeda is that IS established an Islamic state, it has a territorial base with a capital city, an economy, ostensibly an Islamic law and order system. The dream was realized and now everyone is streaming there to get in on the act. This dream is becoming the nightmare of the free world, and there is no doubt that it must be stopped.”

Meanwhile, the United States has no clear answer regarding how and when it will be halted. The increasing involvement of Russia and Iran, together with a massive Hezbollah presence, is not helping. Instead, they are only increasing the regional chaos. The efforts invested in the Vienna peace talks, in an attempt to achieve a diplomatic solution, are advancing but not at an adequate pace. The global coalition against IS is investing more energy in internecine conflict than in its main goal.

Meanwhile, Israel is taking care to wish good luck to all the warring elements while keeping an increasingly worried eye on the Russian presence in the Mediterranean Sea and in Israel’s northern airspace. Israel’s position remains unchanged: that IS endangers Israel far less than the Shiite axis from Tehran to Beirut. Why is this so? A highly placed Israeli intelligence source put it this way on condition of anonymity: “Both Iran and IS want to destroy Israel, but only Iran is capable of doing so. Iran is capable of dropping 100 tons of explosives on Israeli cities all by itself, and a similar quantity via Hezbollah. The Islamic State, by contrast, is Kalashnikov rifles on pickup trucks.”