The Israel Defense Forces believe that excellent intelligence capabilities will determine the fate of Israel’s next war. 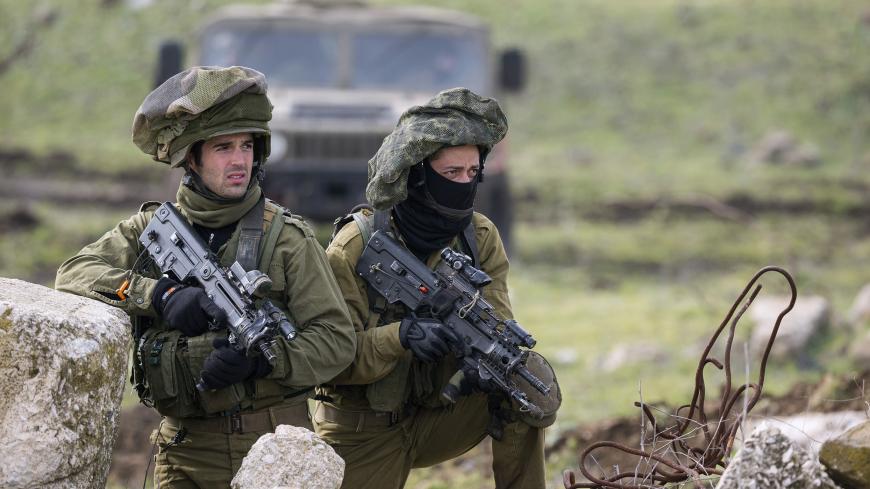 The past year has not been a bad one for Israel’s national security. The wave of individual terror attacks, which emerged in October 2015, continued to die down. The “battles between the wars” conducted secretly by Israel against developments in the Middle East that threaten its security have been largely successful. US President Donald Trump entered the White House and started to make good on his pro-Israeli promises. On the “negative” side is the end of the war in Syria, with a clear victory of the Shiite axis.

One dilemma of the Israel Defense Forces (IDF) — which is worse, Iran or the Islamic State (IS) — has long since been decided. (This dilemma was discussed in several earlier Al-Monitor articles.) Now there is a consensus among the Israeli security experts that Iran poses more dangers to Israel and the region than the expansion of IS. “IS was a passing fad,” a senior Israeli security source told Al-Monitor recently on condition of anonymity.

“Iran is a powerful system, with a strong economy, much influence, culture, science, academia and human resources and the ability to activate these resources. Iran today pulls all the terror-strings in the region,” the source said. “Ever since the war in Syria started to die down, Iran also began to oversee Sunni terror and send millions of dollars to Hamas in the Gaza Strip.”

Israeli pundits estimate that the Iranians have about 200,000 Shiite fighters on their payroll in the area between Iran and the Mediterranean Sea. These fighters are Hezbollah men or are part of militias of the Shiites, Houthis or other groups affiliated with this terror network.

Israel invests tremendous diplomatic and intelligence efforts in an attempt to convince the world that Iran is causing great damage to peace in the Middle East. It has met with some success in these efforts. Israelis call this “diplomatic squashing.” More and more countries — in Eastern Europe, Latin America and other places — are getting the message. The Trump administration changed the pro-Iranian direction of Barack Obama’s leadership, though no real results on the ground are yet to be seen. Instead, the key is in the hands of the Russians — as usual.

The past two years have seen numerous diplomatic and intelligence meetings take place between the Israelis and the Russians. This is not only on the level of the prime minister and defense minister, but also on senior professional levels. In fact, the Americans began to worry. “We calmed them down,” a senior Israeli military party told Al-Monitor on condition of anonymity. “The Americans know exactly what we talk about with the Russians.”

The subject? Iran, of course. The Israelis have been explaining to Russian President Vladimir Putin for more than a year already that once the war in Syria is over, Iran will stop being Russia’s ally and turn into Russia’s direct competitor in the rehabilitation of Syria and Iraq. According to Israeli sources, Putin understands this well. He used the Iranians as a cheap, available military land force. As they say in Israel: It’s easier for them to bring in Shiite militias under Iranian command than Russian divisions. “You will find the Iranians competing with you for every contract, every project and for influence in the region,” was the Israeli message directly communicated to the Russians, according to the source. This prophecy is being realized now. The assessment in Israel is that Putin will not really abandon Syria and will not evacuate Russia’s main forces from the country. He is there to safeguard his achievements.

Israeli intelligence talks about the dramatic changes that have occurred in intelligence itself, and to the changes in the battlefields. “These are formative days,” an IDF senior source commented on condition of anonymity about what is taking place now in the region. “Whoever adapts himself fastest to the new reality will win.”

So, what’s changed? Almost everything. For example, the way military power is measured. Once upon a time, to quantify a country’s firepower one would count divisions, tanks, planes and ships. Today, one mainly needs to "count" intelligence. “Without information, power alone can’t accomplish anything,” a senior intelligence source told Al-Monitor on condition of anonymity. “The ability to gain access to qualitative intelligence in real-time, to cope with the world of big data and exploit it for operational needs is what will determine the outcome of the next battles."

Israel believes that in these spheres, the IDF has the upper hand. This is especially true with everything connected to cyber and to imagery intelligence, human intelligence and signals intelligence. Israel has transformed its intelligence into a powerful tool. Occasionally it allows its allies — both overt and covert — to benefit from it. Sometimes there are mishaps, as what took place with President Donald Trump (allegedly revealing a Mossad operation in Syria). But the parties overcome these "accidents" and continue onward. Today it is intelligence that dictates what happens on the front lines.

One of the most sensitive questions that is asked in today’s Israeli defense system is how much longer Israel can continue the "battles between the wars" — the anonymous assaults attributed to Israel, for which Israel usually does not take responsibility. These are usually attacks that try halting Hezbollah’s growing power, and also slow down the missile “precision project” that the Iranians are trying to bring into Syria and Lebanon. The IDF estimates that the "battles between the wars" can continue and have not yet been exhausted. There is still considerable space for Israeli maneuvering and activity, without pulling the country into war. In other words, Syrian President Bashar al-Assad is still not sufficiently strong enough to challenge Israel. The Syrian ruler is perceived in Israel as a leader who is only able to stand because he is held up by crutches. “If the crutches are taken away, he will fall immediately,” a senior IDF source told Al-Monitor on condition of anonymity.

The most important question of all is what will next year look like. What will the next war look like, if and when it erupts on the northern front? “It will be completely different,” a very senior Israeli defense source told Al-Monitor on condition of anonymity. “It will be the first time that we, too, will hear the hum of Hezbollah’s drones overhead. True, they will not be on the level of modern Western technology with strategic damage capabilities, but they could become a real nuisance.”

He added, “Also, the fact that Hezbollah has accumulated much battle experience in Syria should worry us, too. But there is no need to exaggerate. In Syria, Hezbollah fought under the Russian aerial umbrella, against scattered gangs. Facing Israel is a different game altogether. It is clear to us that this time a war in the north would inflict heavy damage on the Israeli home front as well — damage we have never seen in the past. But we must speak clearly: The damage on the other side would be several times more severe and the confrontation would end with an out-and-out Israeli victory. We are also aware of Hezbollah’s possible assault concepts and are preparing for them. If we operate quickly and intensely, we could shorten the hostilities by 30%. [Hezbollah Secretary-General Hassan] Nasrallah also knows this, and he will also want a short confrontation. The longer it drags on, the more chances there are that the destruction and damage in Lebanon will grow to biblical proportions.”

Another issue that has changed in recent years in the region is the map of alliances and interests. If in the past one could color a map of the region with two or three colors and everyone knew who was fighting who, it’s different now. Today, alliances are temporary, everything is regional, fluid, changeable. Israel can find itself in a certain field front on the same side as the Syrian army and even coordinate remote positions with them. Yet only 20 kilometers away the situation would be reversed, with Israel viewing Syria as the enemy. These things are true for all the sides involved on all the different fronts. We are looking at dozens of parties, organizations, tribes and interests that change quickly. This is a picture of total chaos. The side that can take advantage of this chaos is the side that possesses the most qualitative intelligence, that commands the big data and can operate and leverage both covert and overt power. Israel believes that she is that country.