Israel has detected increased activity by Iran as it builds up its military presence in Syria. 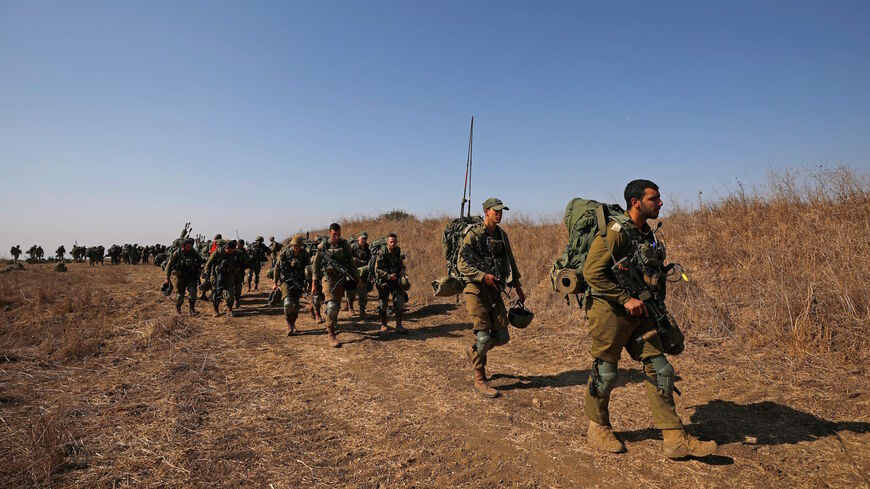 Israeli soldiers of the Nahal Brigade take part in a drill near the settlement of Kidmat Tsvi in the Israel-annexed Golan Heights, on Oct. 27, 2021. - JALAA MAREY/AFP via Getty Images

Is Syrian President Bashar al-Assad starting to change his mind about the long dominance of Iran and Russia in his country? Several intelligence analysts have assessed recently that with Assad’s regime stabilized, the Iranian presence in his country might no be longer an asset but a liability for the Syrian leader. As long as the Iranians remain entrenched in his back yard, the attacks on them attributed to Israel are likely to continue — and have already escalated.

“If it were up to him, the Iranians would no longer be there,” a senior Israeli military source told Al-Monitor a few weeks ago on condition of anonymity. “Assad is now seeking calm and stability. He is making his way back into the fold of the Arab world and his leadership is enjoying renewed legitimacy. A war between Israel and Iran in his territory is the last thing he wants.”

This week’s reports in the Saudi media that Assad was responsible for the departure or expulsion of Iranian Quds Force Commander Jawad Ghafari set off significant buzz in the region. Assad reportedly asked the Iranian regime to recall Ghafari due to the "overactivity" of the Quds Force in his country — meaning the deepening Iranian entrenchment in Syria and its efforts to make the country a platform for war on Israel’s northern borders. Assad seems not to like the idea of having to report to Hezbollah Secretary General Hassan Nasrallah and is starting to display signs of impatience, according to various intelligence sources.

The truth is apparently far more complex. “We will probably not be seeing columns of Shiite militias in the service of Iran moving to the east, crossing the Syrian-Iraqi border and returning home anytime soon,” a senior Israeli security source told Al-Monitor this week on condition of anonymity. “Assad continues to give the Iranians almost complete access to every corner of the country and his military’s emergency storage facilities continue to be at Hezbollah’s disposal, just as they were prior to the outbreak of the civil war.” Asked whether anything had changed, the source answered, “Assad understands the situation and is trying to maneuver within its bounds, while undertaking damage control. The Iranians are currently more of a liability than an asset, but he is far from being able shake off this burden.”

The Russians, too, need to be factored into this complex equation. The Oct. 22 Sochi summit between Russian President Vladimir Putin and Israeli Prime Minister Naftali Bennett was described as particularly successful, lasting almost five hours. Since then, several massive attacks on Iranian targets in Syria have been attributed by foreign outlets to Israel. The two most recent ones were said to be unusual, with one taking place in broad daylight and both of them in areas with a significant Russian presence. None of the strikes prompted condemnation or any comment from Moscow.

According to diplomatic and political sources in the region, the Russian silence attests to Putin’s growing impatience with Iran’s involvement in Syria. Bennett has reportedly updated a deconfliction mechanism designed to avoid friction between Russians and Israelis in Syria, perhaps enabling alleged Israeli strikes in regions with a heavy Russian presence. The Russians, who fought shoulder to shoulder with the Iranians against the Islamic State organization and the rebels in Syria, now find themselves competing with the Iranians over the same regional economic interests. Putin apparently does not like this turn of events.

Israel, for its part, has identified an opening and is surging forward. “The new government,” a very senior Israeli diplomatic source told Al-Monitor on condition of anonymity, “has intensified its activity against Iran’s entrenchment in Syria.” He declined to elaborate. The increased Israeli activity could stem from frustration at Israel’s failure to mobilize US and international support for mounting a credible military threat to Iran’s nuclear program, but it's more likely prompted by Iranian escalation.

According to various intelligence sources in the Middle East, the Iranians have been deploying anti-aircraft missile batteries at strategic locations and supplying “suicide” drones and explosive-laden gliders to their allies in the region to protect their positions, especially in case of a possible future clash with Israel. According to Israel’s Kan 11 public broadcaster, Hezbollah activists such as Ali Assaf, a Lebanese former Hezbollah member currently serving in the Iranian Quds force, are also engaged in similar activities.

Israel has also identified an Iranian effort to shift its delivery of advanced weapons from Tehran to Beirut to supply routes adjacent to Russian military bases or concentrations in Syria in order to deter Israeli bombings. This effort has clearly failed, considering Israel’s latest air raids and Russia’s silence.

Observers are asking where this increasing escalation is headed, whether both sides have a new red line and how willing the Iranians are to risk their people and proxies in Syria and elsewhere at such a critical stage of the discussions on renewing negotiations with world powers. Israel clearly has no intention of allowing Iran to continue its efforts to turn Lebanon and now Syria, too, into a launching pad for hundreds or thousands of precision missiles at strategic Israeli targets.

“What we are actually looking at is the fuse of a detonator on a powerful remote-controlled bomb,” a senior diplomatic source in the region told Al-Monitor on condition of anonymity. “It has been burning slowly, advancing toward the detonator. Right now, there is no knowing when exactly it will explode, but once it does, everyone will know.”