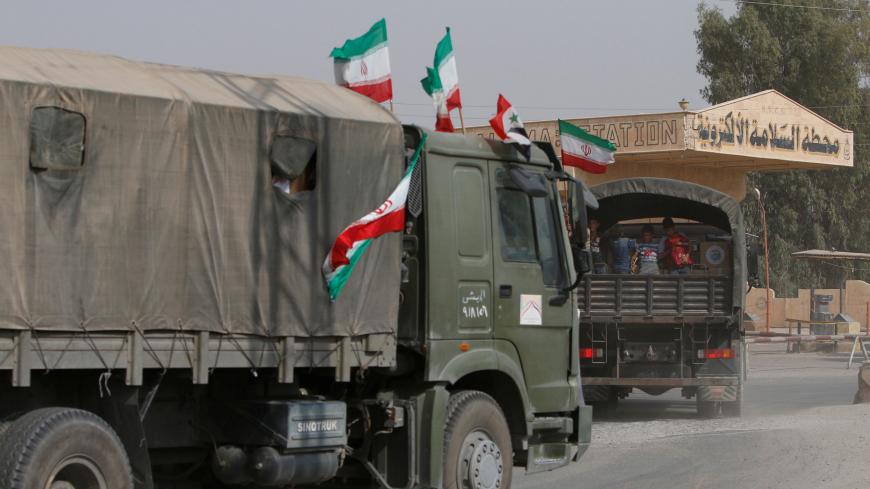 “Ironically, when it comes to the issue of Iran in Syria, we have a rare case of Donald Trump, Vladimir Putin, Benjamin Netanyahu, Hassan Rouhani and Bashar al-Assad all sharing a common interest,” a very senior military source told Al-Monitor on condition of anonymity. “All of these leaders want Iranian forces to get out of Syria.”

When asked why he included Iranian President Rouhani in this list, the source said, “It was no mistake. Iran hasn’t had a uniform position for a very long time now. There is a fierce internal debate underway, and it is reflected on the ground. There’s a state within a state there. The Revolutionary Guards and the Quds Force are one entity, while the president and the official institutions are a second. The last thing that Rouhani wants is to continue investing the few billion dollars that Iran has in Syria, Lebanon and Yemen. He would prefer to bring all those troops home and invest in the Iranian economy instead, but [commander of the Islamic Revolutionary Guard Corps' Quds Force] Qasem Soleimani continues to enthrall the one person in charge of the big money and all the major decisions … [Supreme Leader] Ayatollah Ali Khamenei.”

This is how the heads of Israel’s security apparatus currently assess the Middle Eastern drama unfolding right before us around the clock and on live TV. Syrian President Assad has also had enough of the Iranian presence in his country. He sees them as more of a burden than an asset but is not yet strong enough to show them the door.

“This creates an ideal confluence of circumstances,” a senior Israeli security source says on condition of anonymity. “It is now possible to shrink the Quds Force and put it back in the box. Anyone listening in to the demonstrations in Iran will tell you that the most popular slogan being chanted there is ‘No to Syria! No to Gaza! No to Lebanon! Yes to Iran!’ We are in the middle of a historic process. If we don’t blink, there’s a good chance that this confluence of circumstances can be turned into the beginning of strategic change in the Middle East, which will force the Iranians to close up shop [in Syria] and go home instead of spreading.”

One day after these comments were made, a high-level Russian delegation landed in Israel July 23. The delegation was headed by Foreign Minister Sergey Lavrov and included Chief of the General Staff of the Russian Armed Forces Gen. Valery Gerasimov, who was paying his first visit to Israel. It was a rushed — almost an emergency — visit after Putin’s last meeting with Netanyahu in Moscow on July 11.

The Russians leaked out that it was a very important meeting. It was later learned that the Russians offered Israel a deal, which they promised to enforce. They would guarantee that Iranian forces, Hezbollah and the Shiite militias would be kept 100 kilometers (62 miles) from the Syrian border with Israel, while Israel would commit to accepting Assad’s return to power in Syria and stop its attacks on Syrian territory. Surprisingly, Israel said no. It was a polite but firm refusal. Prime Minister Netanyahu, Defense Minister Avigdor Liberman and Chief of Staff Gadi Eizenkot told the Russians that Israel could not accept an Iranian or Hezbollah presence anywhere in Syria, and that it reserves the right to continue dealing with that presence themselves. The Russians listened carefully and returned home empty-handed.

The day after the Russians were gone, Israeli Patriot missiles shot down a Syrian air force Sukhoi Su-24 fighter jet that penetrated 2 kilometers into Israeli territory. It happened a day after two missiles fired by Assad’s forces set off Israel’s multilayered missile defense system, the “Magic Wand’’ (or "David’s Sling’’), for the first time. This was the first operational test of the missile interception system, and it failed. Regardless, the Russians protested the shooting down of the Sukhoi. An investigation by Israel later found that the Syrian pilot and navigator made a navigation error and did not intend to attack Israel. Nevertheless, the most senior Israel Defense Forces (IDF) officials made it clear to their Russian counterparts that Israel had no choice, and that any aircraft that crosses its border will be shot down. “When an armed fighter jet crosses the border, we don’t have the time, the possibility or the luxury to wait and check its intentions,” the Israelis told the Russians — according to an Israeli defense source who spoke on condition of anonymity. They even showed them a shot of the radar screen, proving that the Syrian jet that came down in Syrian territory had, in fact, flown 2 kilometers into Israel.

Tensions between Israel and Russia have been escalating over the past few weeks as a result of the intense attacks against Iranian targets in Syrian territory, which are attributed to Israel. Similarly, the IDF’s nighttime operation July 22 to evacuate hundreds of White Helmets from southern Syria to Jordan — from where they will be relocated to the West — did not make Russia very happy. Shortly after the dramatic evacuation effort, the Russian Embassy in Israel tweeted a cynical barb critical of the Israeli operation. This forced Netanyahu himself to announce personally that Israel evacuated the White Helmets — a group that Putin and Assad both regard as a strategic enemy dedicated to toppling the Assad regime — and that it did this in response to an explicit request from Trump and countries such as France. What Netanyahu was actually insinuating to Putin was that he had no choice and it was not an Israeli initiative.

At this stage, Israel has managed to maneuver between the raindrops of this storm while barely getting wet. The strategic connection between Jerusalem the political echelon, Tel Aviv the Israeli defense system and Moscow is more stable and closer than ever. Netanyahu meets with Putin almost monthly, Liberman speaks with his Russian counterpart Sergei Shoigu every week and Eizenkot maintains intense communications with his Russian counterpart Gerasimov.

“Ultimately, the Russians appreciate strength,” a senior military source told Al-Monitor on condition of anonymity. “They keep track of what we do. They recognize our determination and even our courage, and they respect that … as long as that does not conflict with their own interests.” The same source said “the Russians don’t have friends; they only have interests.”

For now, Russia’s interests are very much in sync with Israel’s interests. “Putin realizes that he no longer needs Iran and Hezbollah to be his boots on the ground in Syria, so that now the Iranians have gone from being an ally to being a competitor in the rehabilitation of Syria and its hegemony,” the senior military source told Al-Monitor. “That is why it doesn’t really bother him when Israel strikes at Iran, and why he would have no problem if Israel would force Iran and Iranian influence out of Syria. On the contrary, it suits him just fine.”