Israel ‘alone in fight’ against Iran in Syria

Although Netanyahu failed to convince Trump to back down on his decision to withdraw US forces from Syria, it won’t change Israel’s policy on Syria. 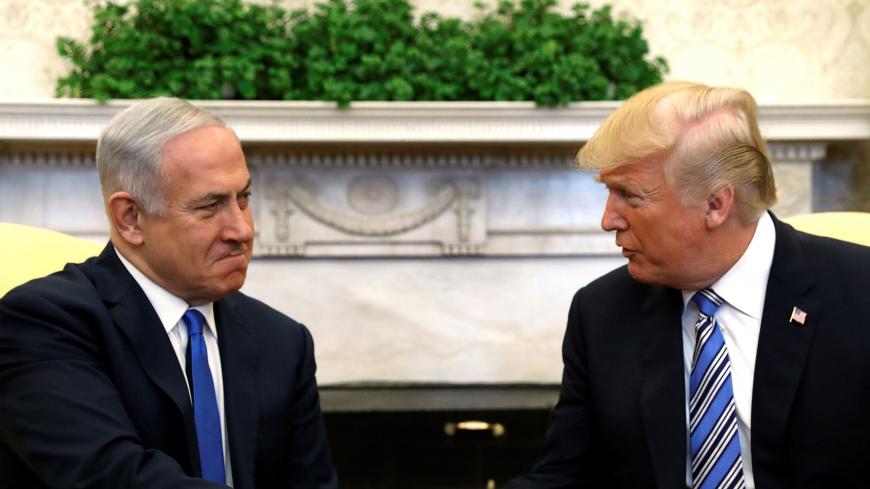 “We know that we’re alone in this fight,” a very senior source in the Israeli defense establishment told Al-Monitor this week. “Still, we have no choice but to carry on.”

The April 4 phone call between Israeli Prime Minister Benjamin Netanyahu and US President Donald Trump made it clear to the Israeli leadership that “the friendliest president to Israel ever” has no plans to change his strategic decision to withdraw US forces from Syria and leave the arena to Russian President Vladimir Putin. Reportedly, Netanyahu did try to explain to Trump what the implications of such a withdrawal would be. But according to Israeli sources informed about the content of the call, while Trump expressed his understanding of the Israeli position, he made it clear to Netanyahu that he will not change his mind. The two men agreed that the United States would continue to grant Israel widespread international support, but the United States is unwilling to continue being bogged down in the Syrian quagmire. Trump apparently told Netanyahu that now that the Islamic State has been defeated and eliminated, the United States has no reason to remain there. At the same time, Trump promised Netanyahu that the United States would stand beside Israel and provide it with assistance if needed.

This was a major disappointment for Netanyahu. It undermined the idyllic romance between him and Trump, replacing it with the kind of tension that left a bitter taste. Netanyahu knows that Trump is his best card; when it comes to Israeli interests, he makes a point of saying all the right things. The problem is that the president does not always follow up on his statements with actions on the ground.

Right now, the most critical issue for Israel’s national security is the fact that Iran is pouring every effort into establishing its presence in Syria. Yet this is the very issue in which Trump stubbornly refuses to provide Israel with the goods. The president has completely reversed US policy on Iran. He thinks the exact opposite of his predecessor, Barack Obama. In other words, Trump sees Iran as a liability rather than an asset and describes it as a state exporter of terrorism and violence. The president is even giving serious thought to the possibility of pulling out of the nuclear agreement signed between Iran and the superpowers. That's because Trump sees the Iranians as posing an immediate and severe threat to American interests in the Middle East and the stability of the Sunni regimes, considered America’s main allies in the region. The problem is that when it comes to putting words into action, the president tends to show reluctance. When it comes to what happens in Syria “the day after,” the president is silent.

“Ostensibly, when it comes to the situation of Iran along our northern border, there is no difference between his [Trump’s] position and that of Obama,” a senior Israeli Cabinet member told Al-Monitor on condition of anonymity. “In the end, they both made the same decision to get out of here [the region] as fast as they can and not allow the Middle Eastern quagmire to cost America more than it already has.”

Despite the fact that it is all but alone, Israel will not blink. The massive aerial attack on the Tiyas (T4) Air Base near Homs has been attributed to Israel, and this was confirmed by official US sources. Israel has remained completely silent about it. On April 10, Defense Minister Avigdor Liberman said, “I don’t know what happened or who attacked T4,” while emphasizing that Israel is absolutely unwilling to allow Iran to continue establishing itself in Syria, “whatever the cost.” Liberman added, “Accepting Iranian entrenchment in Syria would be to accept Iranians putting a chokehold on us. We cannot allow that."

Liberman could not be clearer about Israeli policy. It seems that over the past few months, Israel has gotten past the threshold of fear and come to terms with the fact that it is on a collision course with Iran and Syrian President Bashar al-Assad (in the best scenario); with Iran, Assad and Hezbollah (in a bad scenario); or with Iran, Assad, Hezbollah and Russia (in the worst scenario).

Israel’s defense establishment is usually the one to define the boundaries of the military arena for the country’s political leadership and curb any adventurist attitudes that politicians might have. In this case, however, they see eye to eye with Netanyahu, Liberman and the other bellicose Cabinet members. Such unanimity of opinions between Israel’s war Cabinet and the top brass of the Israel Defense Forces and defense establishment has not been seen in a very long time. The policy is simple: Under no circumstances can Israel afford to blink in Syria. It must not allow Iran to establish air or ground bases in Syria, nor can it allow Iran to put military infrastructures in place. Anyone who blinks now will wake up a year from now — or maybe three years from now — and find themselves in an intolerable situation. And what if this policy leads to war in the region? So be it. Israel has stopped worrying about that, at least for now.

The aerial assault on the Syrian air base was much more massive than any previous attack attributed to Israel. Despite statements that the Syrian defense system shot down some of the eight missiles fired by the F-15s involved in the assault, Western sources with access to intelligence reports told Al-Monitor that dozens of missiles were actually fired at the northwest quadrant of the base, where Iran established its own independent airfield for military drones. According to reports reaching the West, the base was completely destroyed, and at least seven Iranians were killed. The incident resulted in an unprecedented wave of responses, including a very blunt and firm condemnation from Russia. The Russians even summoned Israeli Ambassador to Moscow Gary Koren for talks with the deputy foreign minister to clarify what happened. Meanwhile, Iran described the action attributed to Israel as a crime and promised revenge.

Once again, Jerusalem refused to show any sign of fear. On April 10, Liberman told anyone who would listen that if Iran takes action against Israel from Syrian territory, Israel will respond with massive force. Sources in the Israeli defense establishment noted that if Iran makes good on its threat, Israel will take the necessary steps to topple the Assad regime and eliminate Assad himself. In other words, it was sending a very explicit warning to Tehran, Damascus and Moscow that the landlord, i.e. Israel, has gone wild — anything can happen now. Israel may be alone, but that does not scare her. On the contrary, it only underscores the existential need to show gumption by sticking firmly to the red lines that it set for itself.

The ball is now in Tehran’s court. Israel believes that Putin will hold back in response to Israel’s aggressive policy. Given the chaotic situation in the region, no one in the Israeli leadership has any plans to fold now. If Iran is willing to risk an open war with Israel just so that it can establish military infrastructure in Syria, it must also realize that Israel is willing to go all the way in response. What we are now witnessing is a regional game of “chicken,” involving many conflicting forces with complex and often contradictory interests. It is within this situation that Israel is trying to introduce a new deterrent. Over the next few weeks, we will see if it succeeded.