A consensus has emerged among Israel’s political and security establishments that a military clash with Iran is likely. 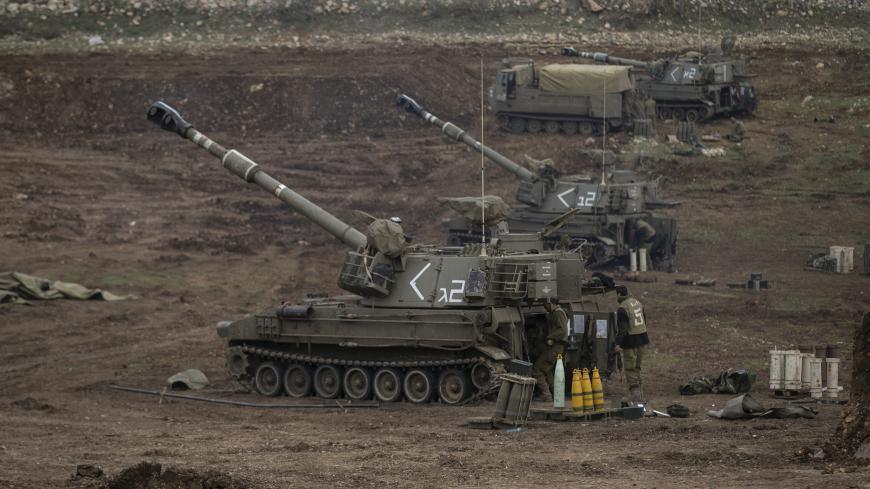 Israeli soldiers stand next to mobile artillery units near the border with Syria in the Golan Heights, Jan. 27, 2015. - REUTERS/Baz Ratner

Senior members of the Israeli security establishment are predicting that the month of May will be one of the most volatile periods in the current era. Maj. Gen. (Res.) Amos Yadlin, the former head of the Israel Defense Forces (IDF) Military Intelligence Directorate, said in an interview published April 22, “I have not seen a May this dangerous since May 1967.”

Of particular note, two of the five military fronts concerning Israel have rapidly escalated in recent months. In the campaign against Iran being waged in Syria, the two sides have inched closer to an unprecedented tipping point. The situation in Gaza has worsened, with mass marches and protests held at the border fence every Friday for the past four weeks, in addition to the ongoing humanitarian crisis in the enclave.

The odds for an all-out war between Israel and its opponents this summer are no longer miniscule. As I wrote April 18 in Al-Monitor, Defense Minister Avigdor Liberman said at a Cabinet meeting that it is possible that war will, indeed, erupt, and if so, Israel will have to cope with Iran, Syria, Hezbollah and the Lebanese army as well as Hamas, Palestinian Islamic Jihad and Salafist groups in Gaza.

Many Israeli legislators are worried, because for the first time in a long time, consensus exists among Israel's top brass about the situation and how to deal with it. There are no dissenting or minority opinions on the subject, no moderate voices warning against escalation and the possible results. It reminds some of Israel’s statesmen of the heady days between the 1967 war and before the eruption of the 1973 Yom Kippur war, which resulted in one of Israel’s greatest military catastrophes.

“The fact is that the entire military elite, the prime minister and the defense minister, all the Cabinet ministers, and almost all members of the opposition — even almost all of the media — are united behind the government’s policy,” said one source to Al-Monitor who served in several senior ministerial positions and requested anonymity. “This [unity] arouses my suspicions. It creates an unhealthy situation in which the prime minister and ministers do not stop for a minute to ask themselves, ‘Is this scenario truly unavoidable? Do we have an iron-clad reason to embroil ourselves in a war that might cause thousands of deaths on the Israeli home front as well?’”

An examination of Israel’s strategic situation shows the current period to be ripe in terms of a possible confrontation with Iran. Syrian President Bashar al-Assad is busy trying to survive and therefore would have no intention of taking an active part in such a conflict. Hezbollah, meanwhile, wants to retain its arsenal of rockets and missiles for “Judgement Day,” and therefore is distancing itself from possible conflict. Thus, assuming Iran has to face Israel alone, this scenario would be a golden, one-off opportunity for Israel to create new rules of the game and secure its redlines in Syria — that is, it will not tolerate an Iranian presence in Syria, period.

Such is the current thinking of Israel’s leadership. The problem is that in the case of a serious flare-up, basic working assumptions can vanish into thin air with the launching of hundreds or thousands of missiles from both sides.

In the last few days, Israel and Iran have found themselves fighting a war of words. Hossein Salami, the vice commander of Iran’s Islamic Revolutionary Guard Corps (IRGC), threatened Israel with annihilation, claiming that all of Israel's air force bases would be destroyed if a confrontation erupts. Meanwhile Prime Minister Benjamin Netanyahu retorted with equally harsh threats. Iranian Foreign Minister Mohammad Javad Zarif assumed the role of the responsible adult, dismissing a “regional war.” He also stated, however, “If they [Israel] continue to violate [the] territorial integrity of other states, there’ll be consequences.”

Israel views Gen. Qasem Soleimani, the head of the IRGC's elite Quds Force, as the “head of the snake,” the man behind Iranian efforts to put Israel in a stranglehold. Soleimani leads the aggressive faction surrounding Iranian Supreme Leader Ayatollah Ali Khamenei, while President Hassan Rouhani and his people share more moderate views and oppose Iran's increasing involvement in Syria and the efforts expended to “export the revolution.”

According to intelligence that reached the West, Soleimani was behind the Iranian decision to disclose that seven IRGC members were killed in the April 8 assault attributed to Israel on the T4 air base near Homs. The names of the guards were released, and mass public funerals were held. Western intelligence sources believe that this was an attempt by Soleimani to force the Iranian leadership, mainly Rouhani, into acting against Israel and support a harsh military reprisal, for which Israel is waiting.

According to some assessments, Iran will try to retaliate using an Israeli approach: hitting a military base, inflicting losses on soldiers, but not targeting civilians. It is believed that the strike will be carried out from Syrian territory against a military target in northern Israel. The IDF is preparing for such a scenario, but what will Israel's political echelon do after the Iranian reprisal? Will it decide to “contain” it and forgo retaliation? Undertake a symbolic reprisal or launch an aggressive assault to eliminate additional Iranian targets on Syrian territory? This last option might serve to turn the entire northern front into one big conflagration.

All eyes are focused on two triumvirates: Khamenei, Rouhani and Soleimani in Iran and Netanyahu, Liberman and IDF Chief of Staff Gen. Gadi Eizenkot in Israel. For the first time in ages, both sides are not certain they want to avoid a confrontation at all costs.

Netanyahu might well use the heating up on the northern front to neutralize or delay his trials and tribulations on the legal-criminal front. According to one scenario, he could try to assemble an emergency government by asking the opposition, led by Isaac Herzog in the Knesset and including the Zionist Camp (led by Avi Gabbay, chair of the Labor Party) and Yesh Atid (led by Yair Lapid), to join. This would enable him to appear as the nation's leader in a time of crisis and downplay the police investigations tightening around him.

The chances that such a scenario will play out are not as low as they used to be. The closer the decisive moment gets, the more and brighter the warning lights. The traditional restraining elements in Israeli politics have been weakened, the consensus in Israel is worrisome and the slope is more slippery than ever. To this, one should add revelations in the April 23 edition of the Russian newspaper Kommersant, according to which Russia plans to supply Syria with an S-300 aerial defense system in the near future, free of charge. These revelations might generate a preventive Israeli strike, which could not only ignite that arena, but also drag Russia deeper into it.