At 70, Israel sits atop a volcano

Israel’s army holds a definitive advantage over the rest of the region, but the 70-year-old country is confronted by multiple enemies and points of conflict. 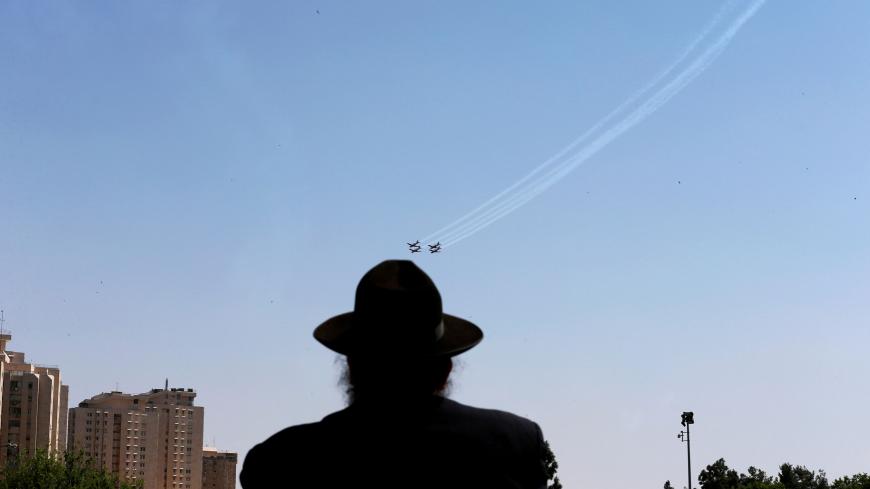 Israel celebrates the 70th anniversary of its existence April 19, and it is not a cliche to say that circumstances have never been better for the Jewish state. “The state of Israel's strategic balance sheet is the best it's been since the establishment of the country,” said Israel Defense Forces (IDF) Chief of Staff Lt. Gen. Gadi Eizenkot in a conversation with Al-Monitor a few weeks ago.

Eizenkot explained his perspective: "We have a strong, powerful army with a great advantage over our enemies. I do not detect nowadays that any of our enemies wants to carry out a direct assault on the State of Israel. … The campaign [between wars] is very intensive and communicates the superiority of our army. In the Middle East, [we enjoy advantage through] intelligence superiority, aerial superiority, operational superiority and informational superiority and by the fact that we are viewed as a very powerful state that can act with high precision. The IDF works around the clock in order to promote our security interests and prevent our enemies from achieving advanced capabilities. The fact that Israeli citizens have been enjoying peaceful lives throughout the recent years testifies to the success of our method."

Yet despite this, on April 17 the IDF canceled its F-15 squadron's participation in the international Red Flag–Alaska, the international military drill in the United States. Tension along Israel's northern front is increasing with the anticipation of an aggressive Iranian response to an attack attributed to Israel on T-4, an Iranian military air base in central Syria that operated unmanned aircraft. The IDF destroyed a drone on Feb. 10 after it crossed into Israel along with the caravan unit operating it. It later emerged that it had been an armed drone assault, as explosives were found on it. Eizenkot called the episode a “watershed event, the first time that Iran demonstrated its operational capacities within the state of Israel.” It was an earth-shaking moment for Israel and led to a chain of events that threatens to set the region on fire.

This is an example of the Israeli paradox. On the one hand, Israel is, truly, a military and economic powerhouse. Its existence is not shrouded in doubt, and there are no forces threatening its existence. On the other hand, at any given moment, one of its battlefronts could burst into flames, leading to all-out war. Defense Minister Avigdor Liberman has raised this likelihood in Cabinet discussions and has even commented that he thinks that this scenario will, ultimately, come to pass: a multi-front war that will erupt between Israel and all the players on the northern front (that is, Iran, Syria and Hezbollah), and then Hamas will join the fray.

Even though this constellation would not pose a strategic threat, it would cause significant destruction to Israel's homefront. For example, Tel Aviv would suffer strikes and hundreds of civilian deaths, something that Israel has never experienced. Israel's defense system would not be able to deal with the hundreds and thousands of rockets and missiles that would rain down on it every day. When compared to “Israel's strategic balance sheet is the best it's been,” we are still talking about serious threats indeed.

Eizenkot enumerated the possible battlefronts that Israel faces as “five fronts plus one,” the “plus one” being Iran. The other five are Lebanon (Hezbollah), Syria, terrorism on the West Bank, the Hamas threat from Gaza, and the threat of the Islamic State from the Sinai.

According to Eizenkot, there might be an escalation on all these fronts in 2018. The reasons are varied: the collapse of the Palestinian reconciliation between the West Bank and Gaza; signs pointing to the end of Palestinian President Mahmoud Abbas' time in office; changes taking place at the deepest levels of Palestinian society; Gaza's deteriorating humanitarian situation; continued Hamas attempts to mastermind terror in the West Bank and East Jerusalem; and the expected relocation of the US Embassy to Jerusalem, which is inflaming the Palestinian community.

To the above one must add Iran's continued efforts to establish a presence on Syrian frontlines vis-a-vis Israel along with Hezbollah's efforts to equip itself with advanced capabilities, which, according to Eizenkot, Israel “has no intentions of allowing [to happen].” Regarding the latter, Eizenkot is referring to Hezbollah's ability to launch pinpoint airstrikes against Israeli territory and to acquire advanced aerial protection that would thwart Israel's absolute aerial superiority on the front.

This article is being written at a time when tension in Israel has peaked with regard to the very hot front between Israel and Iran. As previously reported in Al-Monitor, Israel and Iran are in a virtual war. It started as a cold war, branched out into a conflict by proxy and is now becoming a real, direct confrontation.

On April 17, Israel raised the curtain on Iran's efforts to increase its power in Syria, revealing some of the intelligence it has related to this goal. The IDF released details, names, facts and Iranian methods to the media, including the Ilyushin planes used to secretly transfer firearms and ammunition to Syria; the identity of the commander of the Iranian aerial wing in Syria; the activities of Islamic Revolutionary Guard Corps commander Qasem Soleimani, considered the “brains” behind the project; and satellite photos and additional data about the bases Iran is building in Syria. This process signals to the Iranians Israel's great intelligence-gathering capacity along with this simple message: We are keeping track of you, we are updated in real time, and we will not blink.

Israel is steeling itself for an Iranian reprisal. Tehran also finds itself in a complicated, delicate position. On the Syrian front, it is at a great disadvantage versus the IDF. The Iranians clearly know that Israel is capable of wiping out their presence in Syria in short order and at low cost to boot. The problem is that there are many other threats on the Syrian front that serve to balance the deterrence equation. At the top of the list is Hezbollah's arsenal of missiles. A flare-up from any direction could lead to a widespread conflagration in which all the sides would fire, launch and hurl everything they have at everyone else. This is the definition of “all-out war,” according to Liberman.

So says Eizenkot, and he speaks the truth. The problem is that despite such statements, tension in Israel continues to rise sky high. This Independence Day finds the state of Israel at the height of its power, but also at the height of vulnerability. Its enemies are aware of this, too.