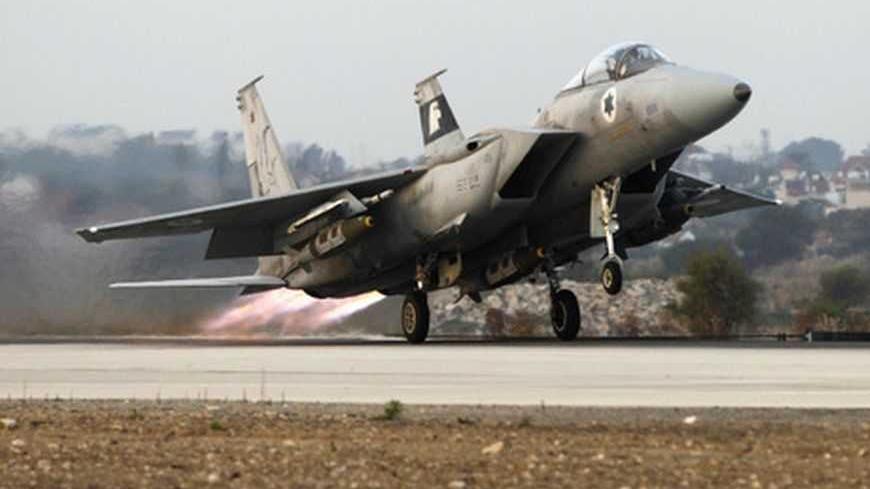 An Israeli air force F15-E fighter jet takes off for a mission over the Gaza Strip, from the Tel Nof air base in central Israel, Nov. 19, 2012. - REUTERS/Baz Ratner

In contrast to the disappointment evinced by the Israeli public, the Israel Defense Forces are now summarizing their analysis of the Pillar of Defense operation in Gaza with great satisfaction. Israel’s military views the operation as a small-scale prototype of Israel’s future wars: short, powerful, and reliant on aerial power. Evidently the IDF has extricated itself from the trauma of the Second Lebanon War (2006) failed ground maneuver and has amassed enough confidence to refrain from a ground offensive in future conflicts as well. The new deputy chief of staff, General Gadi Eizenkot, who currently seems to have the greatest chances of being appointed the next chief of staff, is a most prominent exponent of that approach.

Why does the IDF label Pillar of Defense as a “success”? Although politically the operation led to a rise in Hamas’ stature, militarily — it ushered in a peace and quiet to the Southern communities that they have not experienced in years. While high-echelon military figures are not taking any bets on the future, many of them expect the quiet in the South to extend for a long time. The IDF is still impressed by the efficiency with which the Hamas enforced the cease-fire on all the factions in Gaza — in (almost) one fell swoop.

The main achievements of Pillar of Defense [operation] were registered in the first half hour of the operation: the liquidation of Ahmed Jabari signaled that Israel is not deterred from striking at high-ranking Hamas officials. Immediately afterward, Israel’s air force destroyed 17 Iranian Fajr rockets and struck at scores of short-range rocket launching pits. Painstaking collection of intelligence facilitated the accurate hits and many in the IDF felt that it would have been possible to announce victory and conclude the operation after only 24-48 hours.

But that did not happen. The operation lasted an additional week — which many felt was pointless — while the reserve forces that were mobilized with Tzav 8 (emergency draft), readied themselves in the country’s South and waited for the command that never came. Here we still see evidence of the influence of the Second Lebanon War trauma that will evidently continue to accompany us in all future conflicts. Ever since 2006, the chief of staff will always request an extensive mobilization of the reserves in order to lay the groundwork for a land maneuver, and the political echelon will always authorize this step. This is the source for the gap that was created in the Israeli public opinion, between expectations and results: When the IDF receives authorization to call up 70,000 soldiers — more than the number of reserve soldiers called up in the Second Lebanon War, and many more soldiers than the Gaza Strip can possibly contain — this creates public expectations that Israel is readying itself to solve the Gaza problem once and for all. Meanwhile, the IDF had no intentions whatsoever to carry out an extensive ground operation in Gaza.

The years preceding the Lebanon War saw IDF development of the view that the Israeli Air Force could be relied upon to deliver munitions with great precision and speed to almost every spot in the Middle East. This view received particular significance after the American Air Force demonstrated in 2003 in Iraq how a state could be dismantled of its military and strategic abilities, even before the first US soldier set foot on Iraqi land. The American concept of effects-based warfare seemed especially suitable for the current era, during which Israel is immersed in confrontations with organizations that it cannot defeat militarily, and can only score victories in the public awareness.

Israel approached the Second Lebanon War with this mindset in July 2006. However, Fouad Siniora’s government ruled in Beirut at the time, and Siniora was the darling of the West. Israel’s government rejected Chief of Staff Dan Halutz’ request to conduct air strikes against Lebanese infrastructure, and the IDF was forced to focus its activities mainly against the Hezbollah. After 33 days of fighting that terminated in limited and unsuccessful ground maneuver, a sense of missed opportunity reigned in Israeli public opinion. The IDF then began the process of rehabilitating its ground forces under the leadership of Chief of Staff Gabi Ashkenazi, while he dismissed and disqualified the approach that preceded the war.

Ashkenazi led a “back to basics” process — reconstructing basic military ground-based abilities with a return to the traditional approach in which only ground maneuvers can win battles. Therefore Ashkenazi insisted, exactly four years ago, on ground maneuvers in Gaza during the Cast Lead operation. He also did so in order to return self-confidence to his soldiers in their capability of operating in hostile territory, as well as to signal to Israel's neighbors that the IDF is not afraid of ground maneuvers.

The Second Lebanon War was considered a failure; the Winograd enquiry commission’s report detailed the many elements of the failure, one by one. But as the years went by, the war’s many important attainments began to be recognized. Both during and after the war, the IDF wallowed in the analysis of the many failures that it had registered, and ignored the dramatic effect the war had on the other side. Hezbollah, surprised at the Israeli reaction to the abduction of two [Israeli] soldiers in 2006, received a severe beating. Afterward, they did not dare shoot even one bullet along the length of the border with Israel in the six-and-a-half years that have passed since the end of the war. Since then, Nasrallah also does not dare spend too much time enjoying the sunlight.

General Gadi Eizenkot had served during the war as head of the Operations Directorate and, afterward, as Head of Northern Command. He was quick to identify those hits that created deterrence vis-à-vis Hezbollah, and a year after the war, he presented the “Dahiya Doctrine” that became the IDF’s guiding concept in its clash with Hezbollah. Eizenkot saw that out of all the actions taken by the IDF in 2006, the single most important thing that created deterrence was the tremendous devastation caused by the Air Force on Beirut’s southern quarter — Dahiya, and the Shiite villages in the country’s south.

According to the doctrine he presented, in any future confrontation with Hezbollah, Israel will operate disproportionate firepower against all assets of Hezbollah and the Lebanese state, in an attempt to bring about a speedy conclusion to the fighting. In the words recently uttered by a senior officer, “Goldstone [report of Israel’s Cast Lead operation in Gaza 2008-09] will pale next to what will happen in the next war in Lebanon.”

During Eizenkot’s tenure as Head of Northern Command, he demanded that his underlings create for him what the IDF lacked in the Second Lebanon War: Targets, targets and more targets.

According to the doctrine, the Air Force will use its full firepower from the first minute of the fighting, while striking at more than a thousand targets every day. Hezbollah also understands this and therefore, warfare against it will not be graduated. Instead, Hezbollah will also use its full firepower in an effort to cause maximal damage to the Israeli home front, and mainly to the center of the country. That will be a test that the Israeli home front has never endured before, so the IDF will try to shorten the duration of fighting as much as possible. Despite the fact that reserve forces will be mobilized immediately at the start of the war, the IDF will strive to bring about an end to the combat without being dragged into an extensive ground operation that would entail long weeks of warfare.

And so we have returned to Moshe (Bogie) Ya'alon and Dan Halutz’s strategy of “searing the consciousness” of the enemy; this deterrence concept has now returned to the IDF mainstream, without statements or proclamations. Chief of Staff Benny Gantz implemented it for the first time in Operation Pillar of Defense, and Gadi Eizenkot, an officer who thinks before he shoots, will remain faithful to it if he will be appointed the next chief of staff .

Throughout his long career in the IDF, Eizenkot proved that he is a strong-minded, stubborn officer who does not shrink from opposing his superiors. He also will not support anyone who wants to conduct experiments that will cost the lives of his soldiers. Till now he has proved that he is blessed with calmness, discretion, and an unflagging drive to search for sane alternatives to violence. He does not flinch at using force, but is very careful to examine the use of force against the size of the target. [Israeli Prime Minister Benjamin] Netanyahu and the next Defense Minister will need to muster much fortitude to appoint such an assertive figure as chief of staff.

By the way, oncoming Prime Minister Benjamin Netanyahu and his next defense minister, perhaps Ehud Barak, will not find an enthusiastic partner in Eizenkot for a unilateral strike in Iran. If Eizenkot will receive such an order — he will carry it out, but will strive to enlarge Israel’s international and domestic basis of legitimacy before taking action. As of now, he is considered the leading candidate to be appointed chief of staff in February 2014, but the list is not yet closed.