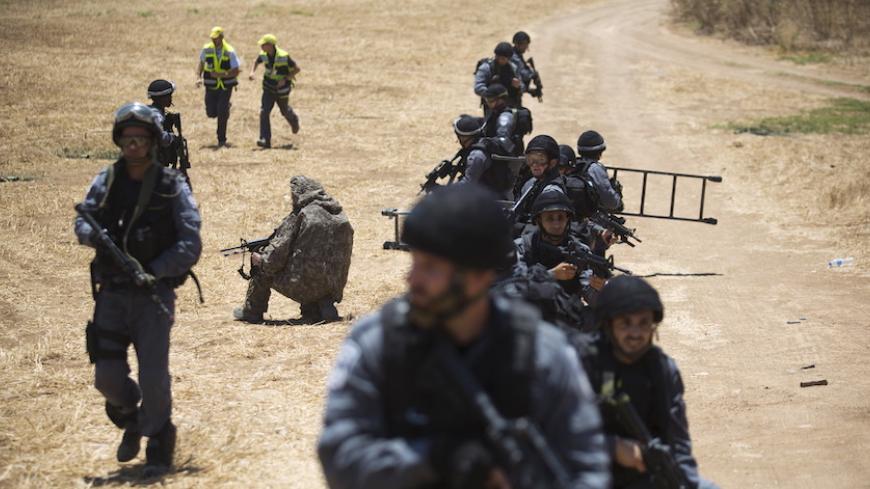 Israeli policemen secure the area during a drill simulating a bomb attack on a train in Kiryat Gat, Israel, June 4, 2015. - REUTERS/Amir Cohen

The story behind the appointment of reserve Brig. Gen. Gal Hirsch to the position of Israel’s next chief of police (inspector general) is greater than the sum of its parts. This decision involves more than professional, police-related considerations (the police force has been immersed in crisis for a long period, as detailed in a February Al-Monitor article) or political considerations (Prime Minister Benjamin Netanyahu invested much effort in trying to influence the naming of the police-chief candidate). This story is also affected by security considerations, with deep roots that go back to the Second Lebanon War that erupted nine years and one month ago in July 2006. With the backdrop of the war by the Israel Defense Forces (IDF) against Hezbollah in Lebanon hovering over this affair, it is no wonder that Israeli journalists made jokes Aug. 25 on Twitter, encouraging one another to “get [Hezbollah Secretary-General] Hassan Nasrallah’s take” on this strange and unexpected appointment. No doubt that even in the Hezbollah leader’s bunker, in Beirut's Dahiyeh district, people are keeping close watch on news of Hirsch’s appointment to the position of the State of Israel’s No. 1 policeman. They probably don’t understand the logic of this appointment. In Israel, as well, most of the pundits have difficulties understanding this decision.

Hirsch, a daring officer of paratroopers and other special units, served as Galilee Division commander during the Second Lebanon War. This is a regular division tasked with protecting the so-called blue line separating Israel from Lebanon, and the IDF from Hezbollah. Until July 12, 2006, Hirsch had enjoyed an almost perfect career.

Hirsch was a paratrooper, born and bred, and held command roles in the paratroopers reconnaissance platoon, one of the most prestigious IDF units. Hirsch was one of the planners of Operation Defensive Shield (2002) for subduing the second intifada, and he gave this very name to the commercial company he founded after his demobilization (“Defensive Shield Holdings”). Earlier, in the 1990s, Hirsch had served as commander of an Israel air force special forces unit, Shaldag. It was then that he first came to the attention of the IDF top brass, due to a mission he led in the depths of Lebanon. There he infiltrated a Hezbollah post, was prematurely discovered by the enemy, but refused to break off contact as he was instructed to do by the IDF command in Israel. Instead, Hirsch disconnected his communications apparatus and continued the battle until its successful conclusion. IDF rescue units barely managed to extricate Hirsch and his soldiers; it was touch-and-go for a while whether they would make it. The young commander was widely applauded (for bravery) afterward but also harshly criticized by then-Chief of Staff Amnon Lipkin-Shahak for violating orders.

One way or the other, Hirsch made his way up to the post of Galilee Division commander and was viewed as someone with a promising future ahead of him, including a shot at eventually being short-listed for the position of chief of staff. Then a Hezbollah force infiltrated Israel, hit and abducted two Israeli reserve fighters, Eldad Regev and Ehud Goldwasser (only afterward did it come out that they had been killed prior to the abduction), and the Second Lebanon War erupted.

After the war, Hirsch was charged with two main public accusations. First, for lowering the alert level in the zone a short time before the soldiers were abducted, contrary to the situation on the field. Second, he was blamed for the flawed functioning of the Galilee Division that was unsuccessful in scoring significant achievements vis-a-vis Hezbollah. In Israel in 2006, the fresh-faced Ehud Olmert served as prime minister with Amir Peretz, a newbie defense minister, next to a chief of staff, Dan Halutz, who was an airman. They desperately searched for a “victory photo-op” that would allow Israel to end the war honorably. But no such picture was found. The attempt of Hirsch’s division to announce its conquest of the Lebanon village of Bint Jbeil was an out-and-out failure.

Hirsch, together with head of Northern Command Udi Adam and Halutz, paid the price for that war. Two commissions that investigated the failures of the Second Lebanon War ­— the Winograd Commission (2006) under Judge Eliyahu Winograd, and a second probe (2006) under the much-esteemed Maj. Gen. Doron Almog — practically had Hirsch beheaded. But Hirsch, as opposed to the others, refused to meekly accept the decree. He founded, as mentioned earlier, a private company that offered consultancy services for defense-security issues and also sold arms privately, but Hirsch continued to fight to clear his name. By the way, Hirsch (after his release from the IDF) was one of the higher-level security consultants in Georgia before its confrontation with Russia a decade later (August 2008). Afterward, Hirsch was blamed for planting false illusions in the minds of the inexperienced Georgians regarding their ability to take on the powerful Russian bear. These illusions were later shattered, much like Hirsch’s military career.

But everything changed this decade. History proved that the Second Lebanon War was not the humiliating failure that many thought it was. On the contrary. In no other war had Israel achieved deterrence that lasted for more than nine years.

Hirsch began a widespread public campaign to reaffirm his legitimacy.

Hirsch wrote an autobiography (“War Story, Love Story”) and benefited from three significant acts of encouragement: Retired Supreme Court Justice Eliyahu Winograd (who chaired the Winograd Commission) wrote a letter in which he recommended that Hirsch’s name be cleared of all accusations related to that war. Mishael Cheshin, retired deputy chief justice, made similar statements after he studied the commission’s report. But the greatest back-up of all came from the present chief of staff, Lt. Gen. Gadi Eizenkot, who recently made an on-the-record, in-front-of-the-cameras statement that the residents of northern Israel owe Hirsch the peace and quiet that they have enjoyed in the last nine years. “We don’t need the opinions of scholarly judges in order to know the truth,” Eizenkot said in a video clip that was publicized by the IDF spokesman Aug. 7 and even made its way to YouTube.

Hirsch did not content himself with all this; what he wanted most of all was to return to the IDF and receive the coveted rank of general. Hirsch wanted to be a member of the General Staff forum; he wanted complete vindication of his name. But the relevant chiefs of staff, Benny Gantz (2011-2015) and Gadi Eizenkot, did not grant him his wish. The most he received was his return to military reserve duty and a prestigious appointment to deputy commander (active reserve) of the IDF's Depth Command. This is a command (formed in 2011) to coordinate the IDF's operations deep in enemy territory.

This week, in a move that came as a complete surprise without any prior preparation, Hirsch received the final stamp of approval for his name-clearing efforts. No, he won’t be a member of the IDF’s General Staff. Instead, Public Security Minister Gilad Erdan decided to appoint him inspector general of the police. This position is parallel to the chief of staff in rank and benefits.

From Hirsch’s point of view, this is a perfect move. But for the Israel Police, it may not be. Bereaved parents from the Second Lebanon War are already threatening to appeal to the High Court of Justice, current police major generals are threatening to resign and analysts argue that Hirsch lacks the appropriate qualifications for the job.

Erdan selected Hirsch, after long weeks of controversy regarding the appointment, with Netanyahu (who rejected other candidates). Hirsch is perceived as an innovative, courageous and surprising choice — a classic out-of-the-box nomination. Hirsch still faces additional hurdles: the Turkel Committee (the Advisory Committee on the Appointment of Senior Public Service Officials), government approval and more. Should he cross the hurdles successfully, Hirsh will begin his life’s mission. If he looks backward, he will reveal that almost all former Israel Police inspector generals took heavy beatings in this role and barely made it out alive. But Hirsch’s advantage is that he’s already hit rock bottom. The only direction he can go is up.