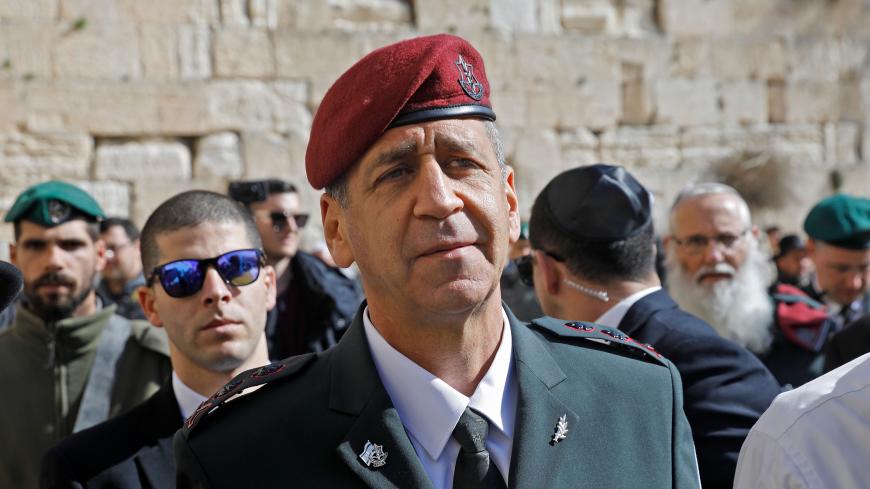 There was a changing of the guard on Jan. 15 in the Israel Defense Forces (IDF): Former Chief of General Staff of the Israel Defense Forces Maj. Gen. Gadi Eizenkot was replaced by Lt. Gen. Aviv Kochavi. Kochavi, “the philosopher officer,” was nicknamed in his youth “Mel Gibson” by the paratroopers due to a striking resemblance to the actor. Now he has received the reins to the most powerful army in the Middle East and one of the strongest in the world. But together with that comes the responsibility for innumerable headaches, bubbling powder kegs and ticking bombs scattered over diverse fronts.

An Israeli chief of staff does not receive even a hundred seconds of grace. Kochavi’s first test is already anticipated for Jan. 18 on the fences of the Gaza Strip. Again, Hamas has not received Qatar's money in cash as the third installment of aid to Gaza; meanwhile, the level of violence continues to rise toward the possibility of a new explosion. The Gaza issue is not the most dangerous of the threats faced by Israel, but it is urgent at this stage because of the lack of any checks and balances vis-a-vis Hamas, which has its back to the wall. In fact, Hamas has shown in the past that when under pressure, it will react violently against Israel. In addition, Israel lacks a strategic goal regarding Gaza-Hamas that could be implemented by the political echelons — in other words, by Prime Minister Benjamin Netanyahu.

The 54-year-old Kochavi has been viewed as an Israeli prince almost from the first minute. His military career began in the paratrooper unit, where he blossomed until he received command over the paratrooper brigade in 2001. It was in this role that he left his strategic mark on the IDF’s battle methods; he succeeded in overtaking the Nablus refugee camps and the Casbah in the 2002 Operation Defensive Shield with almost no casualties. Those were the days of the bloody second intifada in which hundreds of Israeli citizens were slain by suicide bombers who flooded the streets and cities. Prime Minister Ariel Sharon commanded the IDF to re-conquer the West Bank cities and uproot terror. Many IDF higher-ups were concerned about entering the crowded refugee camps and threatening Casbahs that were overflowing with weapons, mantraps, suicide bombers and explosives.

The assessment then was that the IDF would pay the price of dozens, if not hundreds, of fatal casualties and would be forced to kill thousands of Palestinians in order to complete the mission. But Kochavi, a young paratrooper brigade commander, was not deterred. He invented and developed a system through which his brigade took control over Nablus: infiltrating from the inside. Instead of advancing exposed through the narrow alleyways and Casbahs, the paratroopers infiltrated directly into structures and buildings in the heart of the city. From there, they continued to advance via the structures themselves: by breaking down walls to advance from house to house, without exposing themselves to dangers. The operation was successful beyond all expectations and was then carried out in other West Bank cities. The method developed by Kochavi is studied to this very day in military schools throughout the world. The US Army in Iraq and Afghanistan adopted it.

But beyond questions of defense and security, which I will address shortly, Kochavi will also have to deal with his boss, Netanyahu. Netanyahu currently also serves as defense minister and is extremely busy conducting his own war for political survival. On the one hand, he will be less attentive to complex defense issues, but on the other hand, he will need as many military “victory photos” as possible to leverage before the upcoming elections on April 9.

There are problems overseas as well: The two most important strategic partners of the Israeli chief of staff are the US chief of staff and the US secretary of defense, Joseph Dunford and James Mattis, who are leaving their posts. They will be replaced, of course, and Kochavi will have to connect to new people. But in this task, Kochavi enjoys a great advantage: He is viewed as “Mr. America” in the Israeli General Staff. Kochavi has a master’s degree in public administration from Harvard University (a joint program with the Wexner Foundation) and a second master’s degree in international relations from Johns Hopkins University. Kochavi’s English is excellent, and American history is one of his favorite subjects. He is well-versed in American politics, receives American publications regularly and was much involved through his career (especially in his last position of deputy chief of staff) in the IDF’s relations with the US Army. As opposed to his predecessor, Eizenkot (who did not especially like conversing with foreign generals), Kochavi feels at ease in such environments.

Despite his basic qualifications and aptitude, the challenges that will face Lt. Gen. Kochavi will be complex. US behavior in the current era is chaotic and unpredictable, in spite of the relative intimacy that prevails between Netanyahu’s bureau and the White House. Israel’s security system vigilantly keeps close tabs on developments and takes nothing for granted. Israeli intelligence has already shifted resources, energy and much attention to the Iranian threat arena due to its concern that the Tehran regime may decide to enrich uranium again now that the United States has abandoned the nuclear deal. This concern was raised in an earlier article in Al-Monitor, and indeed there has been publicity recently that the Iranians have returned to limited enrichment. Kochavi will try to tighten intelligence cooperation with the United States, but that may not be easy.

US Deputy Secretary of Energy Dan Brouillette visited Israel Jan. 15 and made a startling statement. He noted that the United States evaluates foreign investment very, very closely, and that Israel should adopt a similar approach. If Israel won’t adopt such a defense policy, he hinted, its partners might be reluctant to share with it intelligence data. In other words, he threatened that if Israel continues to tighten relations with China and continues to allow China a spree of economic investments in Israel, then US intelligence-sharing with Israel will be at risk. Brouillette described China’s investments in Israel as “investments with malicious intent.” This Israeli dilemma — which was detailed in an article here last week — and the words of Brouillette clearly highlight the importance of the issue.

And all these ticking issues will, beginning Tuesday morning, sit on Lt. Gen. Kochavi's table.

Kochavi won’t endanger the alliance with the United States and or the fruitful connections with US intelligence. This problem belongs more to Netanyahu, who has been advocating rapprochement with China, than to Kochavi. Still, it will be Kochavi who might be the one paying the price if it comes to that.

Kochavi has been preparing all his life for the role of the IDF chief of staff. He was marked for the job when he was only a platoon commander of the paratroopers, an impressive junior officer who made a deep impression on his soldiers and commanders. Kochavi is a philosophy fan (with an undergraduate degree in philosophy from the Hebrew University) and an amateur painter; he lives in the Galilee and is a vegetarian. In fact, Kochavi is the first vegetarian chief of staff, but don’t underestimate him: When it comes to the battlefield, the Syrian-Lebanon front, the Iranian threat and the Gaza Strip ­— he does not act like one. As Ariel Sharon used to say: In the Middle East, you are either a carnivore or you are on the plate.