IDF chief warns US not to rejoin Iran deal

IDF chief Aviv Kochavi apparently did not consult with his superiors before speaking out against the United States returning to the nuclear deal with Iran. 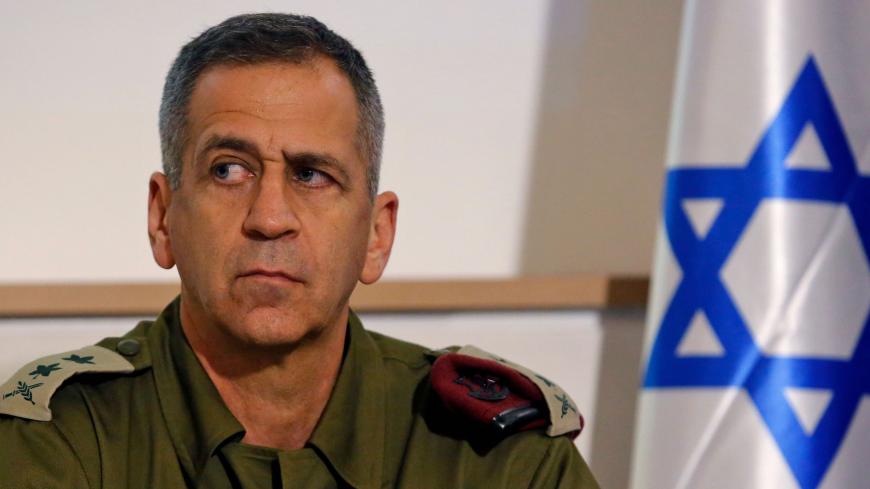 On Jan. 26, the day Al-Monitor ran an article describing hints of a military option against Iran that Prime Minister Benjamin Netanyahu was directing at the new US administration, the chief of the Israel Defense Forces, Lt. Gen. Aviv Kochavi, delivered his annual address at Tel Aviv University’s Institute for National Security Studies. His remarks shocked Israel’s political-defense establishment and likely reverberated in Washington and Tehran.

“If the 2015 nuclear deal had [remained in place], Iran would have gotten itself a bomb," Israel’s top soldier said. “A return to the 2015 nuclear agreement, or even if it is a similar accord with several improvements, is bad and wrong from an operational and strategic point of view. Operationally, because it would enable Iran to enrich quantities of uranium, develop centrifuges to the point of a nuclear breakout. Strategically, it will drag the Middle East into a nuclear race,” Kochavi warned. “Anything similar to the current agreement is bad and must not be allowed. Today’s Iran is not the Iran of 2015. Today’s Iran is under tremendous pressure, economic pressures. … Decisive action is required to deprive Iran of any breakout capability."

He went on, "I have instructed the IDF to prepare a number of operational plans in addition to those already in place. We are focused on preparing these plans in the coming year. It will be up to the political leadership, of course, to decide on implementation, but these plans need to be on the table.”

The timing of his remarks could not have been more sensitive, two days before the first working visit to Israel by US CENTCOM Commander Gen. Kenneth McKenzie and just one week after the Joe Biden administration took office. Kochavi did not give the Americans the usual 100 days of grace and did not leave the messaging to the politicians. Instead of an intimate dialogue behind closed doors, he fired off alarmist rhetoric and barely veiled hints in the style of Prime Minister Benjamin Netanyahu. He surprised everyone — his direct boss, Defense Minister Benny Gantz, was furious — the top IDF brass and all the way to the prime minister's office.

Did he coordinate his remarks in advance with Netanyahu? It seems unlikely. Netanyahu, too, appeared taken by surprise, though he did not condemn the military chief, confirming off the record that Kochavi’s remarks reflect his own position.

Nonetheless, Netanyahu associates were quick to issue a clarification, as diplomatic affairs analyst Barak Ravid reported immediately following Kochavi’s appearance, emphasizing that the prime minister is not interested at this stage in a confrontation with the US administration and is in fact seeking to develop an intimate dialogue with the Americans allowing him to present his position. Netanyahu is pleased that unlike during the Obama administration era, senior US officials are declaring their intention to consult with US allies, including Israel, as Secretary of State Antony Blinken said at his Senate confirmation hearing. “Netanyahu intends to exhaust this option,” a source close to the prime minister told Al-Monitor on condition of anonymity.

Associates of Gantz and Ashkenazi were less laid back. Both spoke with their American counterparts shortly afterward, Ashkenazi with Blinken and Gantz with incoming Defense Secretary Lloyd Austin. Al-Monitor has learned that both ministers assuaged their counterparts’ concerns, explaining that Kochavi was not expressing an official Israeli position and that Israel seeks a productive, professional dialogue with the administration to bridge the gaps between them and ensure the closest coordination possible.

These clarifications notwithstanding, the military chief has not retracted his remarks, nor did not claim he had been misunderstood. He even disseminated the full text of his speech to all the top IDF brass the following day. His relations with Gantz continue to deteriorate. Kochavi’s position collides head on with the understandings that Gantz, Ashkenazi and probably Netanyahu are trying to develop along the Washington-Jerusalem axis.

What is Kochavi up to? He is one of the most experienced and talented commanders the IDF has had in modern times. When he assumed his position two years ago, he was more prepared than almost all his predecessors. He is sensitive to the delicate fabric of relations between the military and political echelons, especially in the international arena. His address was not cleared with his superiors, the security cabinet or the government. As head of military intelligence, Kochavi was among those who argued that the agreement taking shape between Iran and world powers was the “the lesser of two evils,” opposed an Israeli strike on Iran and understood the many advantages of the agreement as well as its drawbacks.

Kochavi’s position runs counter to that of most senior Israeli defense and intelligence officials (except for Mossad director Yossi Cohen, whose views are equally militant), who contend that the absence of a nuclear agreement with Iran is more of a threat to Israel than the deal from which the United States withdrew in 2018. Kochavi’s associates claim he changed his mind on the issue over a year ago. But was the shift professional or shaped by political considerations?

Kochavi’s abilities and charisma make him a natural candidate for Israel’s leadership after the Netanyahu era. In trying to depict himself as more Netanyahu than Netanyahu, he could be signaling that such is indeed his goal, trying to curry favor with the prime minister and score points ahead of Gantz and Netanyahu's decision on whether to extend his three-year term by a year, as has been the norm with almost all IDF chiefs.

Kochavi is an officer, but he is also a political being and knows full well which way the wind is blowing. He is building himself up as a defense hawk, a position that has been Netanyahu’s winning card for years. He may also be trying to emulate Cohen, another talented security hawk.

“What we saw this week could have been a tactical move to prepare for the future struggle on the day after Netanyahu between these two talented men,” a senior political source told Al-Monitor on condition of anonymity. “The first shot but not the last in the future race for Israel’s premiership between Yossi Cohen and Chief of Staff Aviv Kochavi.” Kochavi’s first shot, however, was not his personal best. He will surely learn his lesson and improve his aim next time.