Two senior ministers, Tzachi Hanegbi and Yuval Steinitz, are warning against the United States pushing for a JCPOA-similar agreement with Iran. 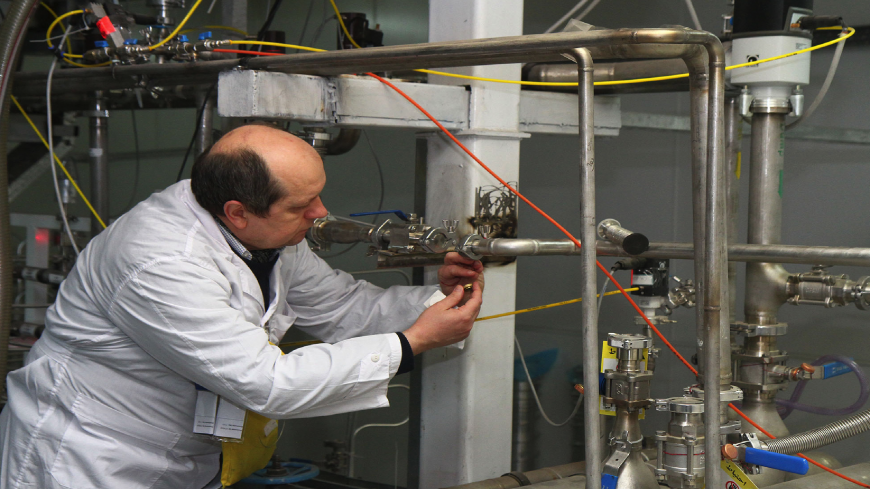 An unidentified International Atomic Energy Agency inspector disconnects the connections between the twin cascades for 20% uranium production at the nuclear research center of Natanz, some 300 kilometers south of Tehran on Jan. 20, 2014, as Iran halted production of 20% enriched uranium, marking the coming into force of an interim deal with world powers on its disputed nuclear program. - KAZEM GHANE/IRNA/AFP via Getty Images

Minister of Settlement Affairs Tzachi Hanegbi warned yesterday that Israel will have to decide whether to strike the Iranian nuclear program or come to terms with a nuclearized Iran. “The United States will never attack the nuclear facilities in Iran. Israel must decide whether it will accept a nuclear Iran. Israel will be forced to act independently to remove this danger,” said Hanegbi in an interview with the public broadcaster Kan.

"It’s possible that in the future there will be no choice [but to attack Iran militarily]. I hope that when our leadership is met with this dilemma, it won’t accept [a nuclearized Iran],” Hanegbi said.

Hanegbi had issued a similar warning Jan. 13 when he said that “if the United States government rejoins the nuclear deal — and that seems to be the stated policy as of now — the practical result will be that Israel will again be alone against Iran, which by the end of the deal will have received a green light from the world, including the United States, to continue with its nuclear weapons program.”

Hanegbi was not the only senior Likud minister to warn of the need to stop Iranian advancement toward a nuclear bomb. Energy Minister Yuval Steinitz said yesterday that "in terms of enrichment, they [the Iranians] are in a situation of breaking out in around half a year if they do everything required. As for nuclear weaponry, the range is around one or two years."

Steinitz's assessments on Iran’s possible breakout-time toward nuclear capabilities contradict those of US Secretary of State Antony Blinken, who had estimated recently that Iran was currently three or four months away from being able to produce enough material to build a nuclear weapon. Blinken had also said that this timeframe could be reduced to a matter of weeks if Tehran further violates restrictions it agreed to under the 2015 JCPOA deal with world powers.

That being said, while both Israeli leadership and the Biden administration agree in principle that Iran could be close to nuclear-bomb production capabilities, views differ on the best course of reaction. Several Israeli top politicians and top security officials object to the Biden administration’s intention to reopen talks with Tehran for reinstating the JCPOA or a similar agreement. Israel would like to see financial sanctions on Iran being continued and reinforced, alongside a much broader, tougher and long-term agreement that would halt the production of nuclear weapons, the production of long-range missiles and Iranian support of global terrorism.

On Jan. 26, IDF Chief of Staff Lt. Gen. Aviv Kochavi said this clearly. Speaking at an INSS conference, Kochavi launched a direct attack on the 2015 nuclear deal with Iran, delivering thinly veiled hints to the new American administration. “If the 2015 nuclear deal had [remained in place], Iran would have gotten itself a bomb. A return to the 2015 nuclear agreement, or even if it is a similar accord with several improvements, is bad and wrong from an operational and strategic point of view. Operationally, because it would enable Iran to enrich quantities of uranium, develop centrifuges to the point of a nuclear breakout. Strategically, it will drag the Middle East into a nuclear race,” Kochavi warned.

According to some publications in the Israeli press, Prime Minister Benjamin Netanyahu would like to appoint outgoing Mossad Chief Yossi Cohen to head Israeli diplomatic efforts vis-a-vis the White House against a new JCPOA. Cohen is set to finish his term as Mossad chief in June 2021, and a replacement for him has already been picked.

Still, June is a long time away. Netanyahu apparently will not wait that long for discretely negotiating with the White House on American talks with Iran. Thus, in the meantime, through ministers close to him and through leaks to the press, Netanyahu is sending the White House clear warnings. Another point that concerns Jerusalem is the fact that President Joe Biden has not called Netanyahu yet — a phone call that should offer Netanyahu the possibility to express his concerns over Iran directly to the new administration. US Press Secretary Jen Psaki suggested yesterday that she expects Biden to call Netanyahu in the weeks ahead.

Adding to tensions on Iran was a report by Reuters yesterday on Iran deepening a key breach of the 2015 nuclear deal. Reuters’ report said Iran had been enriching uranium with a larger number of advanced centrifuges in its underground Natanz plant.

Another report that drew much attention in Israel concerned the arrest a few weeks ago of Iranian nationals in Africa for allegedly spying on Israeli, American and Emirati diplomatic missions, with the intention of preparing a terror attack in an unspecified Central African country. The issue of Iranian support and initiation of terror acts was raised also in recent reports from India on possible Iranian involvement in the blast that occurred Jan. 29 in New Delhi not far from the embassy of Israel. With that, Israel stresses that any new deal with Iran must also clearly curb its support of regional and global terrorism.