Netanyahu appoints his own Iran envoy in message to Biden

Despite the growing presence of Europeans on the Iranian portfolio, Prime Minister Benjamin Netanyahu estimates that the United States alone will be the one to determine the outcome of a new nuclear deal. 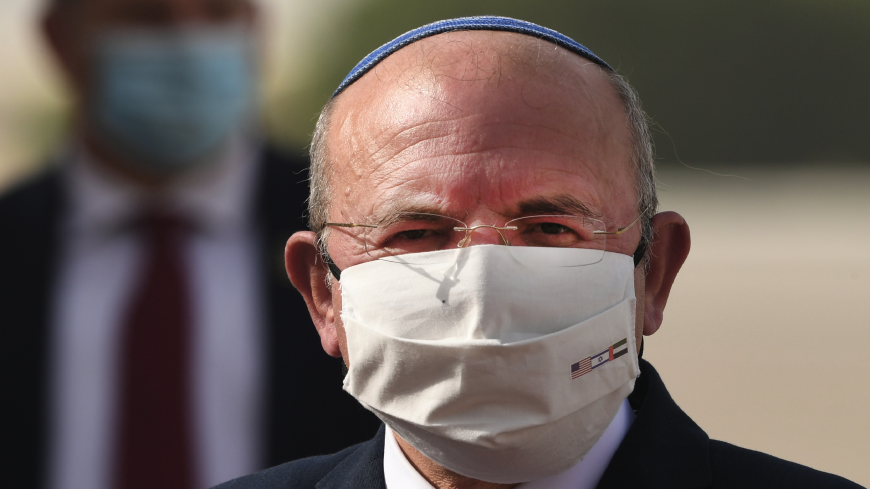 The Head of Israel's National Security Council, Meir Ben-Shabbat, wearing a facemask to avoid the spread of the Covid-19 coronavirus, is pictured at Abu Dhabi airport following the arrival of the first-ever commercial flight from Israel to the UAE, on August 31, 2020.

On Feb. 13, Israel's national security adviser Meir Ben-Shabbat held a video phone call with his American counterpart, Jake Sullivan. The conversation reportedly dealt with regional security issues. It was the second time Ben-Shabbat and Sullivan spoke on the phone since Sullivan was appointed to his position. The first one took place on Jan. 23. In that first conversation, the two men agreed to discuss soon the many topics on the agenda, including Iran, regional issues and advancing the Abraham Accords.

The Feb. 13 conversation was significant because of publications made the day before. Reportedly, Prime Minister Benjamin Netanyahu had appointed Ben-Shabbat as his main interlocutor for the upcoming negotiations between the United States and other major powers with Iran. Ben-Shabbat is now tasked with conveying Netanyahu’s positions on Iran to the new Joe Biden administration, with the hope of establishing a productive dialogue channel on Tehran between Jerusalem and Washington.

According to the Israeli press, Netanyahu has been deliberating for several months over the identity of his envoy on Iran, hesitating between Mossad chief Yossi Cohen and Ben-Shabbat. On the one hand, English-fluent Cohen is perhaps the closest and most trusted associate of Netanyahu currently. He is also well-known in Washington and at the Pentagon and has a large and efficient network in the American capital. In fact, associates of Cohen had told the press on several occasions in these past few months that only Cohen is capable of persuading the Americans to change course on Iran. On the other hand, Ben-Shabbat has proven to be no less loyal to Netanyahu. More important perhaps, unlike Cohen, who could be appointed this summer upon finishing his term as Mossad chief, Ben-Shabbat could get to the job right away under his title of national security adviser.

Evidently, for Netanyahu, the time factor was decisive. A debate is ongoing in Jerusalem as to whether the Biden administration would start talks with Iran before or after elections there scheduled for June. The statement by Secretary of State Anthony Blinken about Iran being just a few months, perhaps even weeks, from a breakout toward nuclear bomb capabilities could signal that the administration is not going to wait. The administration might fear the outcome of the elections of Iran, thus would rather put its foot in the door now before it potentially closes.

The American sense of urgency on Iran affects Israel, but only to some degree. Netanyahu was quick to appoint Ben-Shabbat as his envoy but did little to further the creation of similar dialogue channels with the Europeans. Much like his modus operandi during the Trump administration, Netanyahu believes that the United States, and the United States only, has the fate of the nuclear deal in its hands.

Statements made on both sides of the Atlantic indicate that the new Biden administration is coordinating its moves on Iran and on other strategic issues with the Europeans. Ahead of the United States renewing talks with Iran, France, together with the United Kingdom and Germany, has taken a tough stance. On Jan. 16, the three European powers warned Iran against starting work on uranium metal-based fuel for a research reactor. "Iran has no credible civilian justification for these activities, which are a key step in the development of a nuclear weapon," stressed the European statement. On Feb. 12, European powers condemned again Iran’s decision to produce uranium metal in breach of commitments made to the international community. In light of the statements over trans-Atlantic coordination, one could portray these current developments as a good-cop-bad-cop strategy — the United States in the role of the good cop, eager to relaunch the nuke talks; the Europeans in the role of the bad cop, warning Iran over uranium metal production.

So why is Israel not rallying with the French? Why is Netanyahu sitting and waiting for a phone call from Biden instead of constantly calling his European counterparts? Jerusalem kept silent over French President Emmanuel Macron’s proposal to act as an “honest broker” in talks between the new US administration and Tehran. It also did not react to Macron’s comment over the need to involve Israel and Saudi Arabia in these talks.

One could argue that Jerusalem does not want to damage Macron’s credibility in the eyes of Tehran over acting like an honest broker. Allegedly, an Israel-dissociated Macron would have better chances of dialoguing with Tehran than an Israel-friend-Macron. Still, if Jerusalem does care about the French position, and if it does believe that Macron could carry some weight in the shaping of the next nuclear agreement, then how come the embassy in Paris has been left without an ambassador for more than a year? Ambassador Aliza Bin-Noun left her position at the end of 2019. The embassy is currently managed by the very capable and very experienced Charge d’affaires Daniel Saada. Still, Netanyahu keeps blocking the appointment of a permanent ambassador to France. Clearly, dialoguing with Paris is nowhere near the top of the prime minister’s priority to-do list.