The next Israeli defense minister, be it Moshe Ya'alon, Avigdor Liberman or Naftali Bennett, will have to cope, together with new IDF Chief of Staff Gadi Eizenkot, with a new reality in which Hezbollah targets Israel from the Syrian border. 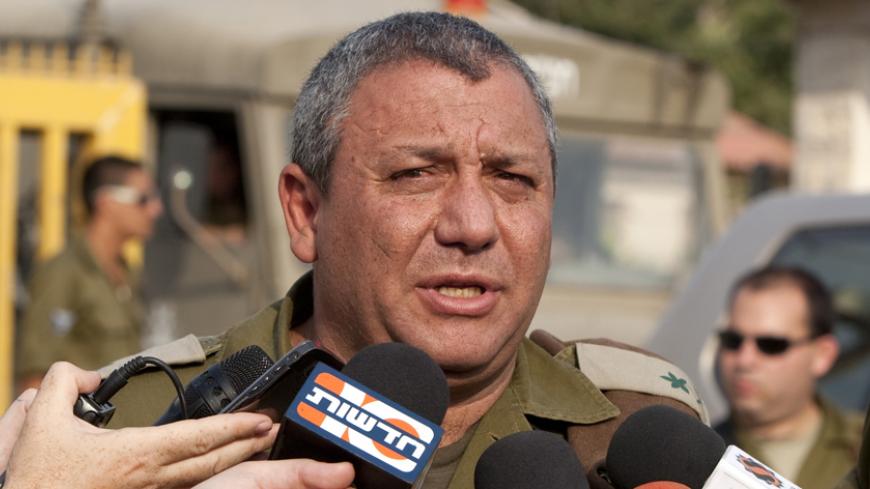 On Feb. 16, the 20th chief of staff of the Israel Defense Forces (IDF), Lt. Gen. Benny Gantz, will complete his four-year term and transfer the mantle of command to his heir, Maj. Gen. Gadi Eizenkot, who will be promoted to lieutenant general. As usual, the ceremony will be attended by Prime Minister Benjamin Netanyahu and Defense Minister Moshe Ya’alon, along with all the generals serving in the General Staff and other senior security officials. The question hanging over everyone at the event will be: Who will become defense minister after the general elections next month? Will Ya’alon remain in the position as most senior IDF officers want?

Two candidates for the position of defense minister have been keeping senior security officials and IDF officers awake at night. The first is Economy and Trade Minister Naftali Bennett, who considered himself a candidate for the position before he started his nosedive in the polls. The second, more surprising candidate is Foreign Minister Avigdor Liberman, who announced in a television interview Feb. 8 that he would only agree to enter the next coalition if he is appointed defense minister. Liberman’s announcement struck the IDF’s General Staff like lightning on a bright summer day. Now they are left wavering between him and Bennett, struggling to decide which is the lesser of two evils.

On the one hand, there is Bennett, who believes that Israel has no partner for peace, is opposed to any two-state solution, supports the continuation of massive construction in all the settlements and advocates a strong-arm security approach against Israel’s enemies. On the other hand, there is Liberman, who may be considered less radical when it comes to certain diplomatic issues (his diplomatic program includes the creation of a Palestinian state), but is much more extreme in everything to do with military conflicts. During Operation Protective Edge, Liberman consistently demanded the conquest of Gaza and the destruction of Hamas. To that end, he was sharply critical of the minimalist approach of Netanyahu and Ya’alon, who were ultimately satisfied with an operation to destroy the assault tunnels and nothing more.

As of now, it is impossible to tell which of these two men will in fact be appointed to the position. We have already noted how Bennett is plummeting in the polls, mainly because of the two-headed race emerging between Netanyahu and Zionist Camp Chair Isaac Herzog, together with his partner and co-chair Tzipi Livni. This race is taking a serious toll on all the parties, which are rapidly losing supporters to the two front-runners. In contrast, Liberman has already crashed in the polls. The well-publicized police investigation into senior members of his party, Yisrael Beitenu, on the eve of the elections, has taken its toll, and he is now expected to win about six seats, not much more than the threshold of four seats. Under these circumstances, it will be difficult for him to get a senior ministry such as the Ministry of Defense. It is also possible that Liberman will be the balance of power who can determine whether there will be a new coalition or torpedo the possibility by defecting to the rival camp. In such a situation, it is entirely possible that Netanyahu, or Herzog for that matter, will break down and appoint him to the position.

Regardless, the next defense minister is expected to face many complicated challenges. In dealing with them, he will have to work closely with Eizenkot.

Gantz took the position just as the Arab Spring was erupting and just a few days after the resignation of Egypt’s President Hosni Mubarak. As Gantz began his term, Syria was the biggest conventional threat to Israel. He is ending it with the Syrian army clinging with every last bit of strength to slivers of Syrian territory and engaged, together with Hezbollah and Iranian forces, in a heavy counteroffensive in the Syrian Golan Heights to win back the region and regain control of the border with Israel. Meanwhile, the entire Middle East has changed beyond recognition. The mapping of threats has been reformulated, and with it Israel’s strategic approaches and the structure of its army. All that was, no longer exists, and no one knows what will be.

Hezbollah and Syria have recently claimed that the rebels who took over large parts of the Golan Heights benefit from active Israeli aid and that they are, in fact, collaborating with Israel. In talks behind closed doors, Gantz confirmed that Israel sometimes treats wounded rebels in hospitals that it set up in the Golan Heights, but that this “isn’t being done consciously. We do not check the identities of the wounded who are transferred to us, and we take into consideration that there might be rebels among them who disguised themselves as civilians after they were wounded.”

Is there any real collaboration? No source in Israel will confirm this. “The rebels in the Golan Heights are a branch of Jabhat al-Nusra, an organization which is, in turn, a faction of al-Qaeda. Even if they share a common enemy with Israel — Syria, Hezbollah or Iran — it is hard to imagine the most extreme incarnation of radical Islam having some type of alliance or other with Israel,” Al-Monitor was told this week by a senior Israeli security official who requested anonymity.

On Feb. 11, Maj. Gen. Yair Naveh, who served until recently as the deputy chief of staff, published a guest editorial in the journal of the Institute for National Security Studies. According to Naveh, “Should Hezbollah nonetheless decide to initiate a large-scale military conflict with Israel, this would indicate that it is prepared to sustain massive damage to its assets to promote success in different arenas or to appease Iran. In such a situation, only a threat to Hezbollah’s existence, its governing infrastructures and its symbols of power and rule will reduce its drive to continue to fight.” According to Naveh, deterring groups like Hezbollah “is possible only if the deterring nation shows its willingness to use its power to damage its enemies’ core strengths.”

Naveh’s comments join a long series of threats that senior Israeli military officers sent northward to Beirut over the past two years. One of these was Eizenkot himself, who was serving as chief of the Northern Command at the time. Eizenkot is an advocate of the use of brief bursts of powerful, focused force, based on return fire and air power.

In closed talks, Eizenkot clarified that in any potential conflict with Hezbollah, Israel will need to change the rules of the game and focus on destroying Lebanese infrastructure, symbols of sovereignty, centers of power and financial assets. He claims that Israel made a mistake in the Second Lebanon War by focusing on Hezbollah targets, rather than targeting Lebanon itself. At the time, he says, there was a desire to preserve the government of Fouad Siniora, considered pragmatic and moderate. In an unofficial conversation several months ago, even former Prime Minister Ehud Olmert said that he did not want to “throw out the baby with the bathwater.” In other words, he preferred to attack Hezbollah rather than Lebanon, which had what was then considered by Israel a pragmatic and sane leadership through which it would be possible to reach some understanding.

Olmert denied what most commentators believed until then. There was never any American order or request that Israel spare Lebanon’s infrastructure. It was a purely Israeli decision. In retrospect, it is quite possible that the decision was a mistake. The Siniora government didn’t survive long after the war, whereas Hezbollah did. It became a significant regional power and a quasi-state of sorts, and is now keeping the Syrian regime’s head above water. At the same time, it continues to provoke Israel while trying to create a new balance of deterrence against it.