Some in the Israeli military are panicked over Avigdor Liberman heading the Defense Ministry, but despite his tempestuous reputation, Liberman is neither stupid nor crazy. 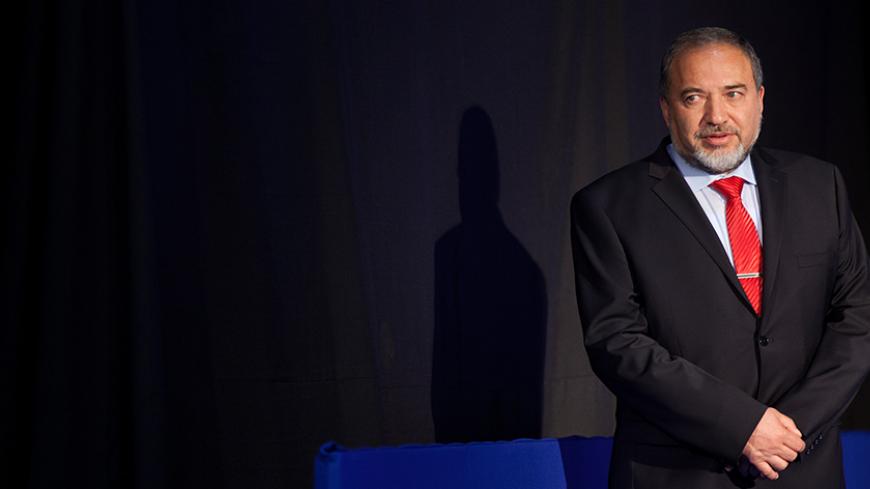 Over the past year, Prime Minister Benjamin Netanyahu’s most bitter, dangerous and combative adversary was none other than Yisrael Beitenu Chair Avigdor Liberman. After deciding in May 2015 not to join Netanyahu’s fourth government, Liberman positioned himself as the prime minister’s number one critic. He hit below the belt at times, such as on March 28 when he called Netanyahu a “liar and a crook” while poking at the prime minister's purported cowardice and accusing him of being a danger to Israel’s national security.

Netanyahu hasn't just taken it. He fights back. “The closest thing to a bullet that ever came whizzing past [Liberman's] ear was a tennis ball,” said associates of the prime minister April 16. (In Hebrew, the same word is used for “ball” and for “rifle bullets.”) “A man who had never in his life led soldiers to the battlefield, never made a single operational decision and never attended one Cabinet meeting from beginning to end does not have the qualifications to be a military commentator.” Now Netanyahu intends to appoint this very same person — who is allegedly unqualified to be a military commentator — to the post of defense minister after pushing Moshe Ya’alon, a former Israel Defense Forces (IDF) chief of staff, from the position.

Even when compared with “normal” rough-and-tumble Israeli politics, the current, rare, system-wide madness has succeeded within three days in generating chaos in the political and international arenas: Netanyahu’s long, secret negotiations with Zionist Camp leader Isaac Herzog to persuade his party to join the government have been halted. Far-reaching diplomatic plans involving international figures, including Egyptian President Abdel Fattah al-Sisi and Quartet envoy and former British Prime Minister Tony Blair, have been shelved.

People in Sisi’s circle view adding Liberman to Netanyahu's coalition as an act of betrayal. A Western diplomat told Al-Monitor that Sisi had put his prestige on the line by mobilizing in anticipation of the Zionist Camp joining the coalition. He agreed to externalize his relationship with Netanyahu for the chance of bringing Herzog into the government and facilitating an international conference in Paris. Instead, he got Liberman in the Defense Ministry. All this is in addition to the departure of an experienced and popular defense minister in Ya’alon.

The coalition was expected to grow from the minimum 61 out of 120 Knesset seats to 67 mandates. This would give Netanyahu breathing space in Knesset votes. Meanwhile, Orly Levy-Abekasis, a Yisrael Beitenu Knesset member, quit in protest over social justice issues remaining out of bounds, leaving the coalition at 66 members.

For the time being, negotiations for a coalition agreement between Liberman and Netanyahu remain stuck. This is due to Finance Minister Moshe Kahlon's opposition to transferring billions in pension money to new immigrants from the former Soviet Union, as Liberman is demanding. At the moment, everything hangs by a thread. This is what the Israeli political house of cards looks like in mid-2016.

Ya’alon departed the Defense Ministry on May 22 following a modest ceremony. He declined to wait for Liberman to assume the position and refused to participate at the traditional farewell and swearing-in ceremony. He has resigned, temporarily, from political life, but he’ll be back with a new political platform, as reported by Al-Monitor.

Meanwhile, the military and upper echelons of the IDF are in something of a panic. Liberman had said on April 16 that if he were defense minister, he would inform Hamas leader Ismail Haniyeh in Gaza that he had 48 hours to return the bodies of Hadar Goldin and Oron Shaul, Israeli soldiers killed in the 2014 Operation Protective Edge, and two Israeli citizens being held by Hamas, Avraham-Avera Mengisto and Hisham al-Sayyad, or he — Haniyeh — would die. Liberman has demanded on dozens of occasions that Gaza be conquered and the Hamas regime be brought to an end. Now he is being offered the keys to the apparatus that could theoretically make this a reality.

It is not only operational issues that worry IDF officials. There are also ideological and ethical issues separating them from Liberman like a massive minefield. The Israeli soldier who shot and killed a wounded Palestinian at short range in Hebron on March 24 is symbolic of these differences in approach: The army arrested the soldier to put him on trial, but Liberman regularly visits the court to show his support for the soldier and his actions. Ya’alon, by contrast, backed up the IDF and its response to the shooting, including the investigation of the soldier. Liberman attacked the investigation and soon might be the minister in charge.

How will that affect sensitive relationships in the highest echelons of the military in terms of its day-to-day functioning? The answer lies in the hands of two people: Liberman and IDF Chief of Staff Gadi Eizenkot. Many see Lt. Gen. Eizenkot as the last of the Mohicans able to make a stand for “IDF values” and ethical standards and to hold the ground against over-the-top, vitriolic attacks, a role that Ya’alon had previously taken on.

Anyone who really knows Liberman knows that a large part of the panic and dismay is superfluous. Liberman is neither stupid nor crazy. Almost two years ago, he was the “responsible adult” among Israel’s political-diplomatic top brass. In contrast to the devastation wrought by Netanyahu on the relationship with Washington, it was Liberman who cultivated an efficacious bond with the United States, defended Secretary of State John Kerry and displayed a pragmatic approach to relations.

During that same period, Liberman put much effort into his plan to wrest control of the Israeli premiership from the center. Then a criminal investigation was opened against his party’s higher-ups. Liberman believes Netanyahu instigated the probe. Liberman was forced to take a right turn to survive politically. Today, he will have to decide whether to return to the role of the responsible adult or cleave to his “bad boy” image and set the Middle East on fire.

The educated guess is that Liberman will turn toward the center. He will not get a second chance to occupy the No. 2 position in Israel. It will be forbidden for him to cause a war or a deterioration in circumstances. He will not have a second chance to make a first impression. At one time, Liberman had raised the idea of a regional approach to peace, a view that recently stood at the center of a Herzog-Netanyahu initiative before it was shelved.

Liberman will surprise everyone and be a prudent, reasoned defense minister — one that is responsible, not tempestuous. If, indeed, he does enter the Defense Ministry in the coming days, Liberman will know that for the first and last time in his life, he faces a glass ceiling. He can shatter that ceiling and continue to take off, or he can crack his own skull. It is his choice.