According to IDF Ombudsman Yitzhak Brick, the Israeli military has invested most of its resources in the air force while neglecting the land corps, leaving Israel vulnerable to Hezbollah. 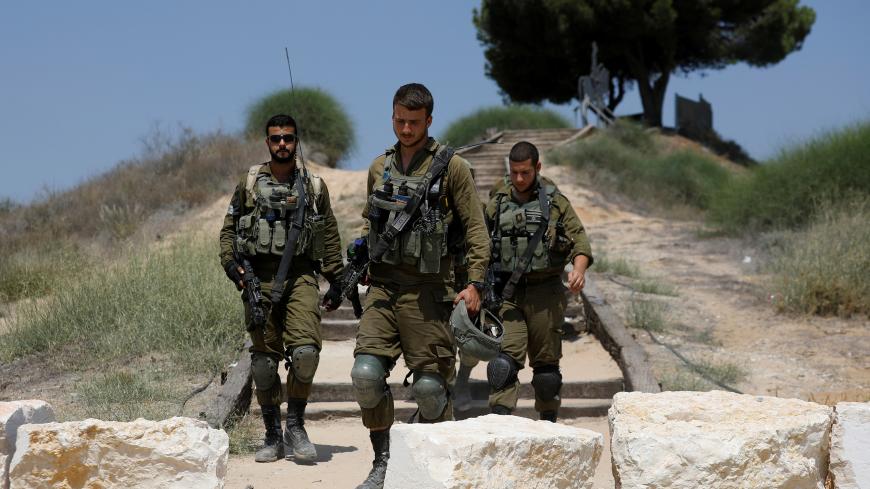 Israeli soldiers walk next to the southern city of Sderot on the Israeli side of the Israel-Gaza border, Israel, Aug. 9, 2018. - REUTERS/Amir Cohen

The ombudsman of the Israel Defense Forces, Gen. (res.) Yitzhak Brick, is a hero of the Yom Kippur War launched by Egypt and Syria against Israel in 1973. Israel came close to losing that war due to a complacent military resting on its laurels after the stunning victory in the Six Day War six years earlier, and the resulting smugness of the political echelon that almost ended in disaster.

Brick, who is winding up a decade-long term, is tasked with handling soldiers’ complaints, not dealing with operational readiness and capability or military buildup. Nonetheless, in recent months he has turned from being a troubling nuisance into a real strategic problem. It began with a report he submitted in June presenting a gloomy assessment of the IDF’s readiness and fitness for war, followed by a long and detailed document on the same issue that he sent to senior defense officials. This month, he issued an additional document, no less detailed, that includes a demand for an external commission of inquiry headed by a retired Supreme Court justice to examine his claims.

Scarred forever by the strategic surprise of the Yom Kippur War, Brick has himself become a strategic surprise. Chief of Staff Lt. Gen. Gadi Eizenkot did not expect trouble from the aging general who fought in a war 45 years ago while Eizenkot was celebrating his bar mitzvah and has now become an alarmist as he prepares to retire.

“No wonder [Hezbollah Secretary General] Hassan Nasrallah said a few weeks ago that he had read the Israeli media and understood that the IDF was not ready for war and Israel was deterred by Hezbollah,” a senior military official told Al-Monitor on condition of anonymity. “Unfortunately, some people would rather spread unfounded fear and glorify Israel’s enemies instead of checking the numbers, the facts and the situation as it is.” Nasrallah’s comments fit with an episode described in “Fear: Trump in the White House,” the book just out by veteran Washington Post journalist Bob Woodward, in which he quotes one of US President Donald Trump’s advisers as warning that Israel’s security apparatus "would be inadequate” to defend the state against Hezbollah.

The message from Eizenkot’s office is calm and reassuring. In response to these and similar claims, the IDF issued excerpts from a detailed report it recently submitted to Prime Minister Benjamin Netanyahu, Defense Minister Avigdor Liberman and the security cabinet on the IDF’s combat readiness and capabilities. “As the person responsible for the readiness of the army for war, I state that the IDF is prepared for any mission required of it, an army with intelligence and air superiority, ground capability and rich operational experience that is tested daily in every arena of war,” wrote Eizenkot.

In his latest report, which according to Haaretz runs to some 200 pages, Brick cites many officers and NCOs in the IDF’s Ground Forces Command, emergency supply depots and other vital sites as claiming that combat worthiness is in decline and morale at a low ebb and pointing to major gaps in training, equipment and maintenance.

Serving officers argue that Brick draws his conclusions from anonymous conversations with soldiers and NCOs and bases them mostly on the “feelings” they express, whereas Eizenkot puts his integrity on the line when he pronounced the military readier than ever for any scenario.

The ombudsman levels most of his criticism at the Ground Forces Command, the military arm that was largely neglected over the years in favor of the air force, intelligence, the navy, missile capability and anti-missile defense. “In recent years, the Ground Forces received huge budgets,” a senior military source told Al-Monitor on condition of anonymity. “Units have been reinforced, we have the biggest ammunition inventory ever, training was beefed up greatly and is at the most intense level since the year 2000. The strategic planning has been completed, the operational plans are ready, the military is training, ready, equipped and drilled.”

Indeed, the IDF concedes that the Ground Forces Command was treated like a stepchild for many years. The government’s decision to reduce the length of compulsory military service and the change in the service conditions of career army soldiers resulted in a severe shortage of human resources, which Brick also addresses. The army nonetheless argued that these decisions did not depend on the IDF’s senior command. “As far as the situation on the ground is concerned, the empirical figures, the reports and the performance, the situation is far better than it was and the IDF has a decisive advantage on all fronts over all its enemies,” the source added.

Al-Monitor has learned that two weeks ago, Liberman held a special meeting to discuss Brick’s reports. At the discussion, which focused on the IDF’s “fitness,” the chief of staff and other senior officials countered Brick’s claims. According to several sources exposed to the discussion, the minister was quite satisfied with what he heard. A senior Defense Ministry official told Al-Monitor that the minister trusts the IDF’s chief of staff and the responsibility he holds for the IDF’s fitness and readiness. According to the source, Brick’s reports may be tainted by “too many emotions” and his perceptions are still affected by the trauma of the 1973 war, coming up on its 45th anniversary.

“The chief of staff is not shirking his responsibility and he guarantees the IDF is at a high level of readiness,” a senior military source told Al-Monitor on condition of anonymity. “Anyone who thinks otherwise is welcome to prove their arguments according to objective criteria that bear scrutiny, not based on random hallway conversations,” he added.

Liberman appears to agree with this assessment as he prepares to pick a successor to Eizenkot, who retires at the end of the year, from among four candidates — Deputy Chief of Staff Maj. Gen. Aviv Kochavi and Maj. Gen. Nitzan Alon, Eyal Zamir and Yair Golan. Liberman has said the job would go to the candidate who can prove that he aspires to engage with the enemy and score a decisive victory. Judging by the criteria he had laid out for picking Eizenkot’s successor, Liberman does not appear concerned about the IDF’s combat worthiness but rather by its willingness to engage and score a decisive victory over Israel’s enemies.