Is IDF gearing up to fight the Islamic State?

Israeli military personnel disagree on whether a decision to unite commando units into a single brigade is driven by the Islamic State threat or the need to adapt to the changing reality of the battlefield. 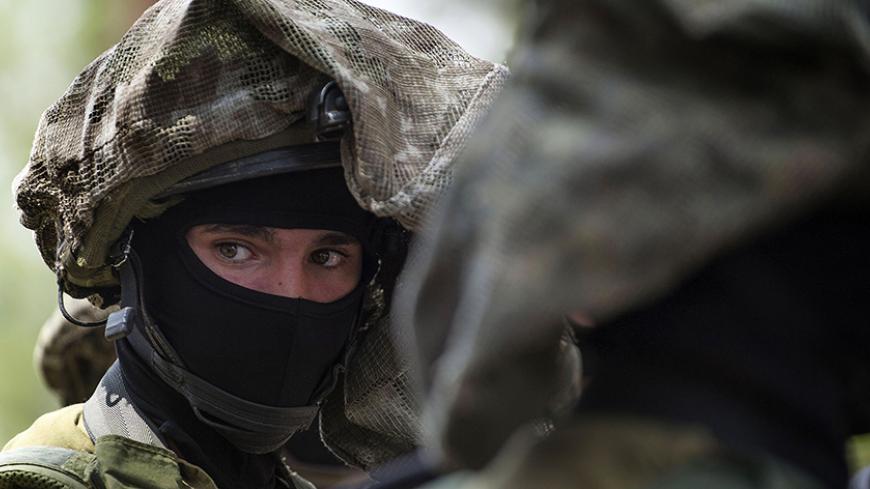 An Israeli special forces member looks on during a visit by US Defense Secretary Chuck Hagel (not pictured) to a training site at an army base near Tel Aviv, April 23, 2013. - REUTERS/Jim Watson

Barely five months into his new job, Israel Defense Forces (IDF) Chief of Staff Lt. Gen. Gadi Eizenkot has already made two significant strategic decisions. The first, announced June 15 and discussed in Al-Monitor, involved the establishment of a “cyber branch.” The second, announced July 6, concerns the establishment of a commando brigade to be headed by a colonel. This latter decision is said to be designed to bring the IDF up to speed with the modern battlefield — which no longer consists of clashes between two large armored forces, but a struggle between asymmetrical forces — with an emphasis on anti-terror warfare in densely populated areas.

The IDF has evolved as an unplanned military, formed on the go, with units established to address ad hoc needs. Its first commando units — the venerated Unit 101, founded by the late Prime Minister Ariel Sharon, and the 890th battalion of paratroopers — were set up in the 1950s. They were designed to address infiltration from Egypt, Jordan and Syria by Palestinian fedayeen and their attempts to commit acts of terror. This impromptu approach remained the norm for years. During that time, the IDF never created a commando unit the size of a brigade.

With the passage of time, the number of special warfare and commando units has grown. For example, after the 1973 Yom Kippur War, during which the IDF sustained heavy tank losses from anti-tank missiles fired by Egyptian infantry, the Magellan and Moran reconnaissance units were formed with the purpose of hunting down missiles behind enemy lines. Such units expanded over the years.

The new brigade will consolidate under one large commando branch a number of the existing commando units: the Duvdevan, the IDF’s undercover unit; the Golani Brigade’s Egoz recon unit; the Magellan unit, specialized in destroying targets deep behind enemy lines and providing intelligence; and the Rimon unit, a commando outfit specialized in desert warfare. The remaining IDF commando units — Sayeret Matkal, Shayetet 13, etc. — will remain independent.

One assessment in the IDF is that the consolidated commando brigade is the military’s response to the Islamic State (IS). One of the brigade’s immediate tasks will be to draw up a new warfare doctrine against entities similar to IS. These are essentially scattered forces specializing in terrorist warfare in populated areas. They blend in well on the ground and have a relatively low profile, namely, staying off the radar.

“The biggest advantage of an organization like IS,” said a seasoned Israeli infantry officer speaking on condition of anonymity, “is the fact that it is very difficult to strike it. It has no big strategic objectives or vulnerable infrastructures. It is always on the move. It can camouflage itself and disappear. You end up fighting a ghost army that is hard to deter, hard to track down and hard to strike at.”

“The IDF’s special [commando] units,” said a senior officer who once commanded such a unit and also requested anonymity, “are used to operating in small, surreptitious settings. The IDF uses them for special raids, pinpoint strikes, certain missions behind enemy lines or such that require special skills. This situation changes the more the arena around us changes. Throughout its existence, Israel prepared for large-scale confrontations against regular armored forces. The biggest threat has always been armored corps stampeding toward Israel from Syria or Egypt. This is no longer the case, which is why our armored divisions are also less relevant. The IDF needs to adapt itself to the modern battlefield and place emphasis on infantry, commando, swift and light, and if possible also furtive maneuverability. It needs to be able to track down and collect intelligence on targets and accurately strike at a dispersed, camouflaged and somewhat amorphous enemy.”

Other IDF sources, however, deny that the new commando brigade constitutes a response to IS. “This is a move that’s part of a multiyear plan,” said a senior IDF officer, speaking to Al-Monitor on condition of anonymity. “We don’t adjust our multiyear plans to these or those terrorist organizations but to phenomena. We mustn’t forget that prior to IS, we had al-Qaeda. We see the jihadist organizations in Syria, such as Jabhat al-Nusra and many others. Israel doesn’t consider IS to be a significant threat. Reality has taught us that whenever IS encounters a trained, skilled, organized and resolute military force, it has been defeated. We do adapt ourselves to developments in the arena, and we’ll continue to do so.”

Another senior official, who recently served as a commander in an IDF infantry arena, described as “nonsense” the assessment that the new commando brigade is a response to IS. He told Al-Monitor on condition of anonymity, “IS is mainly a PR threat. If IS gets near the border, it will be stopped by IDF air force and tanks. There’s no need to have the commando forces engage them. Every standard, trained Golani [Brigade] soldier is better trained, more competent and more efficient than an average IS fighter. This new commando brigade was set up to concentrate efforts, improve power buildup, establish a new warfare doctrine and bring all the means under one roof. To date, the commando units were dispersed between the battalions and brigades. Now we’re talking about one organized punch with a combat concept, training, recruitment, etc.”

Asked what would be required of such a force in the future, if and when needed, the senior IDF official cited the Gaza Strip as a case in point. In the next confrontation against Hamas, should such an event occur, if there’s a need for a pinpoint, sophisticated commando operation deep inside Gaza, there will be a specific address to go to and have it carry out the operation, instead of starting arguments and trying to pool IDF resources and troops, he said.

Meanwhile, Israel has begun to disseminate information to the effect that Hamas in Gaza and IS in the Sinai Peninsula are collaborating. It began with a statement to Al Jazeera by Maj. Gen. Yoav “Poli” Mordechai, coordinator of government activities in the territories, following a July 1 terrorist attack in Sinai. It was followed July 7 with statements by IDF intelligence officials to the effect that the attack in Sinai had been carried out by IS at Hamas’ request in a bid to “create a smuggling route (from Sinai to Gaza) for raw materials for building rockets.” In exchange for this “piecemeal work,” IDF sources told Israeli media, “Hamas is helping IS with infrastructure and training.” According to the sources, IS launched an attack on 15 objectives between the Egyptian towns of el-Arish and Rafah, along the Sinai beach route leading to the Gaza Strip.

Also on July 7, Israeli Defense Minister Moshe “Bogie” Ya’alon told his Italian counterpart, Roberta Pinott, that Hamas and IS were collaborating in Sinai. “On the one hand,” Ya’alon said, “Hamas is fighting against a branch of IS in Gaza, but on the other hand, it is cooperating with IS in Sinai to harm Egypt.” ​