Chief of Staff Aviv Kochavi’s plan of turning the IDF into the world’s most digital army is currently being foiled by coronavirus-induced budget cuts. 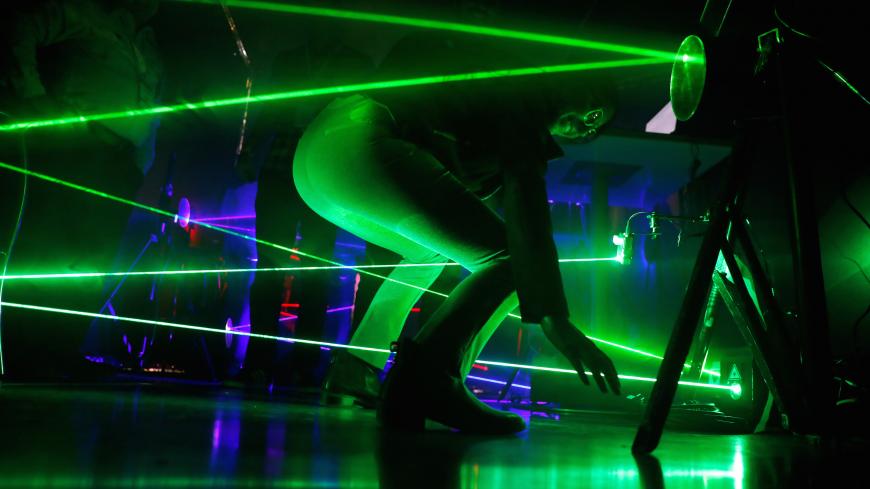 A visitor takes part in a challenge with laser beams at the Israeli police exhibition stand at the Cybertech 2019 conference in Tel Aviv, Israel, Jan. 29, 2019. - REUTERS/Amir Cohen

Lt. Gen. Aviv Kochavi, chief of staff of the Israel Defense Forces (IDF), had a dream: to turn the IDF into the world’s most digital army, taking advantage of Israel’s decisive technological intelligence edge to catapult the military one or two decades ahead. He planted the seeds for the plan during his term as head of Military Intelligence. Now he is fighting for its implementation.

Kochavi was promoted to Israel’s top military position on Jan. 15, 2019, and it was then that he started transforming his vision into a multiyear project. Those privy to the plan, dubbed “Tnufa” (Hebrew for “momentum”) were persuaded that if implemented, it would turn the IDF into a force surpassing the wildest imagination of science fiction creators.

We have a historic opportunity and we have to understand its importance and seize the moment, Kochavi explained at the time, when Israel was a wealthy, prospering state with a budgetary surplus. Kochavi and Prime Minister Benjamin Netanyahu discussed an overall allocation of 40 billion Israeli shekels ($11.5 billion) in 10 equal annual increments to fund the ambitious plan. The sky seemed the limit. Then the coronavirus struck.

Kochavi’s blueprint was designed to provide a response to a very different 21st-century battlefield from the one on which the IDF has won its wars in the past. One such challenge emerges from Hezbollah, which has completely blended into the civilian population of Lebanon and maintains an arsenal of sophisticated guided anti-tank missiles (of the Kornet variety and up) bigger than the combined ones of Syria and Egypt in their heydays.

“In the past,” a senior Israeli military source tells Al-Monitor on condition of anonymity, “you were measured according to your air power, number and mobility of your tanks, firepower and maneuverability. The world is very different now. The arena is complex, urban, with targets taking cover among civilian populations. The enemy is elusive; you are required to display perfect precision in real time, to have the highest quality and most exact intelligence during fighting and to exert control over many more dimensions than you ever knew existed. In addition to air, sea and ground, there are also underground and cyber dimensions. The air dimension is also far more varied. It no longer includes only jet fighters, combat choppers, but also low-altitude gliders, medium-altitude drones and huge unmanned aerial vehicles at higher elevations. It’s a new world, much more dangerous and sophisticated.”

Kochavi moved fast to realize his dream. His goal was to hook up the IDF’s F-15s, its submarines and incredible intelligence capabilities to all branches of the military, in real time. The idea was to create a digital military force operating on a common designated internet network, with a single application into which all the data, targets, commands and actions flow. “This would provide perfect intelligence cover for even the lowliest company commander in the field, give him his own designated glider and perhaps even a drone. He will have a representative of the signals intelligence unit 8200 in his unit, a helmet straight out of sci-fi with a detailed display of the battlefield he faces, allowing him to even pinpoint the location of an enemy combatant in the housing complex he sees,” an Israeli military source familiar with the plan explained to Al-Monitor on condition of anonymity.

The initial stages of the Tnufa program had already gotten underway before the multiyear plan was even finalized or budgeted. Kochavi designated the IDF’s Computer and IT Directorate as the main overall system integrator and the final arbiter regarding its operations. Previously, each branch of the military carried out separate intelligence and cyber activity. Under the plan, the head of the Computer and IT Directorate has taken overall charge of the system that includes the air force, Military Intelligence Directorate and ground forces. The goal is to hook up the company commander on the ground, with the tank, the jet fighter, the chopper, the glider, the drone, the smart bomb and all other means, combatants and weapons into one closed-circuit system. The plan envisions having a smart bomb operating according to the protocol of its manufacturer, Rafael Advanced Defense Systems, speaking in the language of the drone and of the combat helicopter, and of the jet fighter and division commander and the tanks and down to the individual soldier on the ground. The head of the Computer and IT Directorate is now the chief digital officer, the supreme authority who should operate the designated internet network linking all its components to one address and from there to one application, which combines all the targets and operational commands on one screen.

The amazing plan foresees the IDF leapfrogging to a futuristic era, placing it well ahead of its competitors. “Our enemies are on a sharper improvement trajectory than we are,” a very senior Israeli military official recently said to Al-Monitor on condition of anonymity. “Our goal is to expand the gap between their progression and ours and to achieve a decisive advantage,” added the official. However, the 40 billion Israeli shekel windfall that would have allowed Kochavi to turn these ambitious scenarios into reality has now been buried by the coronavirus-induced economic crash.

Netanyahu and his new political partner, Blue and White's Benny Gantz, established a very large (and very expensive) unity government. That, together with the cruel cuts forecast in the state budget, does not bode well for Gantz and his plan. His prospects of receiving the planned allocation are akin to the chances of President Donald Trump joining the ANTIFA movement.

Kochavi will have to focus on fighting to retain the IDF’s current capabilities, not the planned ones. Luckily for him, the pilot stages for some of the most ambitious Tnufa programs are already underway. They include a unique, multidimensional military unit that demonstrates the actions of the future army. This unit has a bit of everything: dog handlers with their trained dogs, small gliders and drones to independently collect intelligence on the ground, a fast human relay to the 8200 signals intelligence unit, a quality infantry force, a small armored force for cover, and constant and instantaneous connection with all air force capabilities.

“This unit connects the F-15s above and even the submarines below the surface to the infantry force on the ground fighting in the heart of a hostile Kasbah. The force will be able to talk to the pilot, operate the drone or glider as well as tank cover all on a single network in real time, reflected on a fully adapted application,” an Israeli intelligence source told Al-Monitor on condition of anonymity. One such unit is already operational, drilling and demonstrating its capabilities. If the plans pan out, it will comprise the basic unit of future IDF warfare, replacing the artificial divisions into air force, infantry, armored corps and intelligence all operating in parallel but not truly integrating with each other. All these branches would operate together under one codename, one operating system and in total synchronization.

Kochavi argues that this multidimensional transformation would greatly improve the IDF’s capabilities. It would shorten the next war from 50 to 25 days, on average, while dramatically and significantly increasing the IDF’s ability to hit dispersed enemy targets taking cover among crowded civilian populations. Kochavi presented decision-makers with the following dilemma: investing additional funds now in order to obtain upgraded supplementary collision, damage and life insurance, or leaving Israel with its current, basic compulsory insurance policy.

As of mid-2020, with unemployment at over 20%, a shrinking economy and a deep fiscal deficit, Israel may be forced to make do, at least for now, with the basic compulsory insurance. Dreams and plans are being overtaken by harsh reality.