Is Israel being pulled into Syrian war?

With growing tension in the Golan Heights and fears of the Syrian civil war spilling over, the IDF is establishing special commando units able to confront IS-affiliated militants. 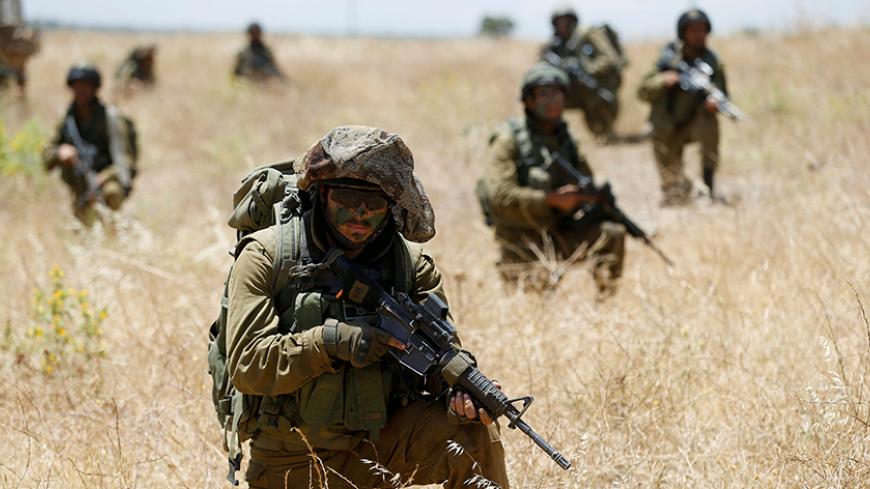 Israeli soldiers from the 605 Combat Engineering Corps battalion take part in a training session on the Israeli side of the border between Syria and the Israeli-occupied Golan Heights, June 1, 2016. - REUTERS/Baz Ratner/File Photo

Since the outbreak of the civil war in Syria in 2011, Israel has succeeded in maneuvering between the different players in this complex arena without getting swept into the fire itself. Israeli deterrence has succeeded in stabilizing an alignment of checks and balances that has proven itself: Hezbollah’s attempts to open a “second front” against Israel on the Golan Heights — in addition to the Israeli-Lebanese border — have been blocked and have failed. The Israeli Golan is usually quiet, while on the other side, at a distance of several hundred meters, an intransigent and brutal war is taking place between Assad’s forces, backed by Hezbollah, and the rebel forces.

Every so often an errant mortar shell lands on the Israeli side, the IDF responds with force and destroys a Syrian army position, and quiet returns. That’s how it has been handled for more than five years. In the background, the slander continues regarding Israel’s alleged cooperation with the Shuhada al-Yarmouk organization (Yarmouk Martyrs Brigade), the local branch of the Islamic State (IS) that controls a limited sector on the Israeli border on the Golan Heights. Senior Israeli figures have strongly denied such cooperation for the entire period. “We have no connection or interest with them,” a senior officer in the sector told Al-Monitor on condition of anonymity. “Israel doesn’t interest them, and as long as that’s the situation, they don’t interest us.”

The only interface between the two sides so far took place at the field hospital Israel established on the Golan Heights, to which some of the injured in the battles on the Syrian Golan have arrived in recent years. “When injured fighters arrive, we don’t check with whom they’re affiliated and we treat them,” an Israeli minister told Al-Monitor on condition of anonymity.

This idyll ended Nov. 27. A force from the Golani patrol battalion was on reconnaissance across the border fence near the Israeli village of Nov, where there is an enclave over the border administered by Israel. Suddenly a vehicle patrol of IS fighters attacked the Israeli force. They fired on the Israeli force with heavy machine guns and small arms and fired mortar shells at them. The Golani soldiers responded with fire. At the same time, an Israeli plane arrived and destroyed the attacking vehicle, killing the four terrorists in it. “For the first time here, we saw a real battle,” a senior Israeli source told Al-Monitor on condition of anonymity. “It wasn’t [battle] overflow and it wasn’t a mistake. It was a planned attack.”

Late that same night the Israeli air force attacked and destroyed an abandoned United Nations post in the sector where the fighting took place on Syrian territory. According to military sources, the site has been used by rebels who identify with IS, the group that attacked the Israel Defense Forces (IDF) patrol a day earlier. The post was completely erased; several bombs weighing a ton each were dropped on it. “It was a warning and a demonstration of Israel’s capability,” an Israeli security source speaking on condition of anonymity told Al-Monitor. “We chose to attack this unoccupied site, but we wanted the other side to understand that we won’t accept a war of attrition on the border.”

Three rebel organizations recently united into one branch that has pledged allegiance to IS and is called the Army of Khaled ibn al-Walid. They are Shuhada al-Yarmouk, the best known of the three, which holds a narrow area on the southern Golan along the Israeli border; the Jihad Army, composed of fighters who defected from Jabhat al-Nusra; and al-Muthanna, which is active near the Daraa area.

Israel estimates that this unified branch has between 1,800 and 2,000 fighters armed with small arms, heavy machine guns and canons plundered from the Syrian army. They display great cruelty, including the decapitation of Syrian officers and fighters and displaying their heads on sticks at the entrance of villages or army bases that were captured. “As more pressure is exerted on IS in Mosul and Raqqa, the restlessness of its representatives in the Syrian Golan increases,” a senior Israeli officer told Al-Monitor on condition of anonymity. He added, “It may be that they received orders to open a front with us, and it could be that they just tried to do so of their own accord. We have tried to send them a message that a conflict with the IDF would not be worthwhile for them.”

Israeli Chief of Staff Lt. Gen. Gadi Eizenkot, upon taking the position, instructed the IDF to create a specialized commando unit composed of the military’s elite special forces, which would be subject to command under a special framework and would formulate a combat doctrine focused on terror organizations such as IS across enemy lines.

In mid-October, the commando unit held a large training exercise that was declared a big success. Now the IDF is considering establishing a second commando unit, and it seems on the path to creating the first commando division in the IDF. The move reflects the deep change the Israeli military is undergoing, which is giving up more and more heavy armor divisions in favor of light, flexible, airborne/parachuted commando forces, who can respond to the mixed multitude of terror groups congregated around Israel.

The IDF does not want to be caught off guard in the next round of violence, as happened with most of Israel’s wars since the 1967 Six-Day War. For a change, the army says, they're adjusting themselves for the next battle before it happens, not after. This is happening on the eve of the publication of the state comptroller’s report on 2014's Operation Protective Edge, when the IDF was caught with its pants down and without a suitable operational response to the threat of Hamas’ hellish tunnels.

At the same time, just to be safe, the Cabinet on Nov. 27 authorized the acquisition of 17 additional F-35 stealth fighter jets for the air force, which would increase the order of battle to 50 jets, or two full squadrons. Along with the Dolphin submarines purchased from Germany — as was reported in a previous article in Al-Monitor — Israel continues to build its strategic strength, while it is busy responding to microtactical threats along its borders.

The predawn Nov. 30 attack attributed to Israel — on a convoy of trucks delivering arms from the Syrian army to Hezbollah in Lebanon as well as on an arms warehouse on the outskirts of Damascus (so the Syrians claim, at least) — can demonstrate Israel’s capability, if it is responsible for the attacks, to focus on several fronts at the same time. Many such attacks have been attributed to the Israeli air force in recent years, but they have decreased since Russia’s massive entrance into the region. Under this assumption we can guess that the Nov. 30 attack signals to Syrian President Bashar al-Assad and Hezbollah that the red lines Israel has drawn in the region are still firm and valid. At the same time, all sides recognize that the Israeli effort to stop the fire on the border and not be dragged into the war in Syria is becoming more and more challenging and complicated.