New Mossad chief brings touch of Bond, lots of reality to the job

Yossi Cohen, the well-groomed new head of Mossad, has a challenging road ahead in adapting his agency to deal with the diverse and convoluted equations of potential threats to Israel. 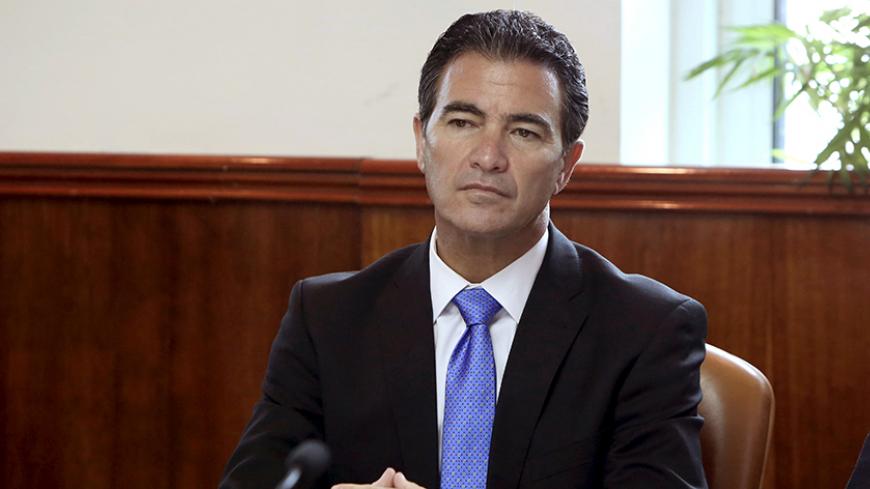 Today, after ratification of the world powers' nuclear agreement with Iran, the Iranian threat represents an even more formidable challenge. This was the essence of the statement by Yossi Cohen, Mossad's new chief, at the Jan. 6 changing-of-the-guard event to replace Tamir Pardo after the successful completion of his term. “Iran continues to call for Israel's destruction, it upgrades its military capabilities and deepens its grip in our area … via its tentacles of terror,” Cohen said. His words were interpreted as an attempt to resuscitate the mythological "Iranian threat” as his first bit of “payback” to his boss, Prime Minister Benjamin Netanyahu, who selected Cohen at the last minute over two other candidates for the job.

The main focus of Mossad's efforts in the coming years will be to penetrate Iran's military and nuclear establishments to keep close tabs on their implementation of the nuclear agreement. Netanyahu wants, more than anything else, to catch the United States red-faced over everything connected to the agreement, which he views as a historic mistake. Cohen, who for the past two years served as national security adviser, will have to invest a great deal of thought in adapting Israel's legendary spy agency to a new era of changed reality and threats far more diverse than Israel has ever known.

At the end of December, a senior Israel Defense Forces (IDF) officer told me the following on condition of anonymity. Exemplifying how dramatically things have changed, he said, “Until two years ago, the map you used to see here, opposite me, was the map of enemy countries surrounding Israel in two concentric circles, the first and second. Now look at the map you see. It is a map of splotches — large, medium and small spots. Each splotch is a separate terror organization, another tribe, another clan with a different ideology and different loyalties. Borders were erased and lines were crossed, creating a convoluted, chaotic, blurred battleground.”

The officer is a general in the IDF, which is supposed to provide a military response for the dozens of splotches scattered on the map. When trying to translate this into the reality Mossad faces, the picture worsens: Once upon a time, knowing what Egyptian President Anwar Sadat, Syrian President Hafez al-Assad and King Hussein of Jordan were thinking was enough for Israel's prime minister to sleep peacefully at night. By contrast, today's Mossad must supply tremendous amounts of intelligence from dozens of arenas and circles intertwined in a bizarre thicket of intersecting interests. The general noted, “Countries and nonstate entities viewed as your enemy from one perspective can simultaneously be your allies.”

In one example, when it gets down to brass tacks, this means that Mossad must be able to give the prime minister, also Mossad's commander, precise, real-time intelligence about the intentions of the head of Shuhada al-Yarmouk (Yarmouk Martyrs Brigade), a new and dangerous branch of the Islamic State (IS) in the Golan Heights that recently made Israeli headlines. Shuhada al-Yarmouk has some 600 fighters who control a 9-mile strip of land along the border between Israel and Syria in the southern Golan Heights. It is waging an all-out war against the nearby Jabhat al-Nusra, affiliated with al-Qaeda.

The Yarmouk fighters are armed with heavy machine guns, anti-tank missiles and a few tanks and armored personnel carriers seized from the collapsing Syrian army. According to the IDF's assessment, Shuhada al-Yarmouk is currently focused to the north in its struggle against Jabhat al-Nusra, but when the time comes, it will not hesitate to turn its weapons against Israel. The organization's fighters were recently ordered to move northward to help IS on the harsh battleground surrounding Daraa, but they refused to carry out the command.

“We are looking at a local organization with local fighters, and they are focused on protecting the territory from which they came, where their families and tribes reside,” a highly placed Israeli security source told me on condition of anonymity. “True, they are loyal to the Islamic State, they have sworn allegiance, but their loyalty is not absolute.”

Now take Shuhada al-Yarmouk and multiply it by a factor of 10, at the least. That alone represents the headache the Mossad chief faces only on the Syrian front. It is no wonder that the more time that passes, the more Israel's top security brass wax nostalgic for the good ol' dynastic despots, like Libya's Moammar Gadhafi, Iraq's Saddam Hussein and Syria's Assads.

Cohen does not fit into the typical mold or style of past Mossad directors. Compared to most of his predecessors — drab, diffident introverts who operated in the shadows — Cohen is a colorful, elegant figure who over the years has forged good ties with the media. He has been blessed with charm and looks as if cloned from the James Bond series. His black hair is always carefully combed, his suits well fitted. He sports silk ties and cufflinks along with a natural grace and the faint scent of high-end aftershave. For years within Mossad, Cohen was affectionately called “the Model.” It is an apt description for a man who, no matter the moment, looks as if he has just stepped out of a suave, expensive men's magazine.

“But don't make any mistake about him, he has a brilliant mind,” emphasized an Israeli source who worked with Cohen for years and requested anonymity. “We're talking about a shrewd, cunning and experienced man, one of the greatest collection officers Mossad has ever known — a legendary agents' operator who knows how to get by anywhere, no matter how hostile the environment, and extract the most from the experience.”

In Cohen's swearing-in ceremony, held behind doors and without media present, Netanyahu lauded the extensive network of contacts developed by Mossad with countries that do not have diplomatic relations with Israel. In recent years under Netanyahu, the agency has left the Foreign Ministry in the cold, with the Mossad chief operating like a “shadow” foreign minister. Mossad's Tevel department coordinates these contacts and networks, and in recent years, has been as active (if not more so) than the Foreign Ministry.

Iran's pursuit of the bomb led a large number of countries — most of them Arab or Muslim — to gravitate toward Israel, because they were even more worried about Iran going nuclear than Israel. Mossad's legendary capabilities and Israel's threat to take action to set back Iran's nuclear ambitions generated widespread, intensive and secret diplomatic activities between Israel, numerous capitals in the Middle East and beyond. Mossad conducted all of this under the prime minister's guidance. Cohen's two years as head of the National Security Command and as Netanyahu's national security adviser are the best preparation one could have to lead Mossad.

Cohen is a fascinating person and an unusual figure. Born in Jerusalem in 1961, he studied in a yeshiva (rabbinical college) and is considered to be a religious man to this day, although he doesn't war a kippah, the traditional Jewish skullcap. Israel currently has an unprecedented number of religious men holding top positions in the various security organizations: Yoram Cohen, head of the Shin Bet, wears a kippah, as does Police Commissioner Roni Alsheich (who hails from Shin Bet's ranks), and now Yossi Cohen as Mossad chief. This is Netanyahu's pet project. Although the prime minister is a secular Jew and borderline atheist, he likes to surround himself with knitted-kippah wearers, representing the national religious sector, perhaps to emphasize the historical alliance between himself and the mythological “base” of his constituents.

Yossi Cohen won the prestigious Israel Security Prize for work he did with Mossad that will never be public knowledge. The years he spent as national security adviser were not dazzling, and that's putting it mildly. Cohen was never able to fill the large shoes of his predecessor, Yaakov Amidror. After Amidror's departure, Tom Donilon left the corresponding position in the United States, and a vacuum followed between the White House and the prime minister's bureau. Cohen and his American counterpart, Susan Rice, were unable to bridge the gap or perhaps didn't even try.

Cohen got into hot water when he reportedly told Rice, in one of their meetings, that he personally did not support Netanyahu making a speech to Congress about the anticipated Iran nuclear deal, but that it was not up to him. The speech, delivered in March 2015, caused an unprecedented crisis between Jerusalem and the US administration. Cohen's words were leaked, intentionally or unintentionally, damaging Cohen in the eyes of his boss. Despite this, Cohen is having the last laugh.

In choosing the next Mossad chief, Netanyahu made up his mind at the last minute. Pardo, the departing chief, had succeeded in convincing Netanyahu to appoint N (whose identity is classified), the agency's current deputy chief, but the prime minister hesitated to announce his decision, which was delayed for about an hour. Finally, Netanyahu took his spot opposite live television cameras and announced Cohen's appointment.

The prime minister had not alerted Cohen beforehand, so Israel's new head spy heard of his appointment on television, sitting at home surrounded by family members. Thus, Israel's new Mossad chief hit the road in classic “American Idol” style. The problem is that in real life, heading Mossad is light years from how it appears on television. Cohen has some truly challenging years ahead of him.