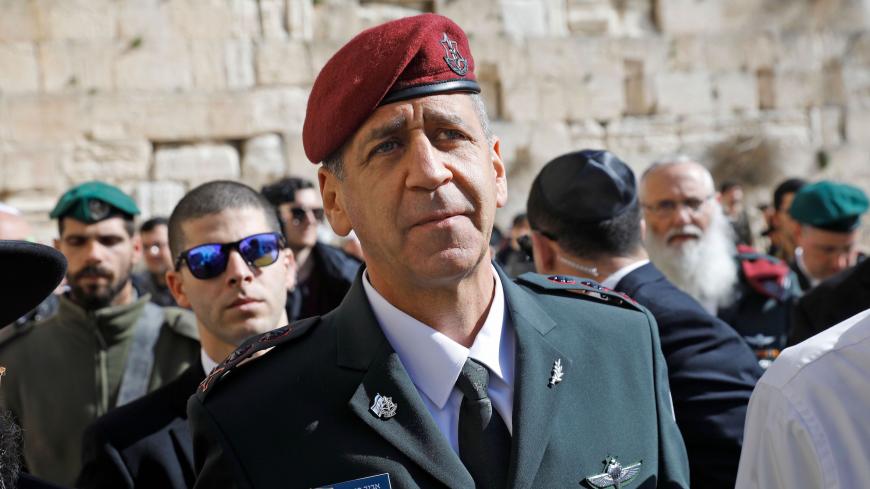 Israeli Chief of Staff Aviv Kochavi attends a ceremony at the Western Wall, the holiest place where Jews can pray, on Jan. 15, 2019, in the Old City of Jerusalem. - MENAHEM KAHANA/AFP via Getty Images

The tense relationship between Israel’s top soldier and its top spy is well known in senior security circles. The head of the Israel Defense Forces (IDF), Lt. Gen. Aviv Kochavi, and Mossad director Yossi Cohen disagree professionally from time to time and many believe they are undeclared rivals for the prime minister’s job down the line.

On Jan. 26, Kochavi leveled an unusually harsh broadside at the the new US administration’s possible return to the nuclear deal with Iran. At the annual conference of the Institute for National Strategic Studies, a prestigious platform for defense-related issues, he also revealed that he had instructed the military to prepare several operational blueprints in addition to existing ones to block Iran’s nuclear ambitions. “The government will of course be the one to decide if they should be used. But these plans must be on the table, in existence and trained for,” he added.

Kochavi’s comments spread like wildfire, the news leading all the news broadcasts and websites that the IDF chief had attacked a declared White House policy a mere week after a new administration took office and against the backdrop of the tense relations between the new president and Prime Minister Benjamin Netanyahu. In leftist political circles, Kochavi was accused of politicizing the army and trying to curry favor with Netanyahu by adopting his hawkish position on the issue. Kochavi was suddenly a player in the turbulent political arena.

One unattributed reaction stood out in the media storm, criticizing Kochavi for his attack at such a sensitive time in US-Israel relations. The identity of the unnamed security source was an open secret — none other than the head of the Mossad. Cohen is the security figure closest to Netanyahu, serving as his foreign policy arm, quasi-foreign minister and envoy on Iran. Cohen is known to hold hawkish views on Iran, just like his boss. Why, then, did he blast Kochavi?

The one-word answer is turf. Cohen apparently disliked Kochavi making the headlines and usurping his top position on Iran and undermining him. He struck back with a personal attack that went far beyond professional criticism that could have been voiced behind closed doors. If anyone was going to talk about Iran publicly, it would be him; Kochavi’s remarks were a challenge to his political ambitions. Cohen, with five years as Israel’s top spymaster under his belt, makes no bones about his own dreams of stepping into Netanyahu’s shoes one day. Asked by a reporter covering the September 2020 signing of the Abraham Accords at the White House about his plans, Cohen replied, “I have not decided yet. There is still time.”

The emerging rivalry between Cohen and Kochavi takes on special meaning against the backdrop of a severe political crisis is Israel. The Kochavi-Cohen tiff provided substantial fodder for defense and political pundits. Cohen is believed to hold right-wing views, while Kochavi is thought to lean to the center-left. However, both men are still in office and the law imposes a three-year cooling off period before they can seek high office. This period could be shortened should Israel hold more than one election during those three years.

Of the two, Kochavi is the milder and less publicly known. He is considered an introverted but also target-oriented and ambitious figure who set his sights on the IDF’s leadership as a young officer. He is an amateur painter and the first-ever vegetarian IDF head. His conduct is solid, a fact that makes some people wonder whether he has the required “killer instinct” to fight for the leadership of the government. Cohen has all the necessary qualities in spades. He is well aware of the media’s impact and is skilled at using it, he enjoys the limelight and does not seem perturbed by being labeled “the model” for his good looks and elegant attire.

In an unusual leaked comment a few years ago, Netanyahu mentioned Cohen as one of two potential successors, the other being his ambassador in Washington at the time, Ron Dermer. Cohen’s relations with Netanyahu are very close. He is privy to Netanyahu’s diplomatic and security plans, serving as his envoy to the Gulf states and as his man in Washington under new President Joe Biden. He is Netanyahu’s most trusted aide. He was instrumental in Israel’s acquiescence to the US F-35 sales to the Emirates, as well as in Netanyahu’s recent secret meeting with Saudi Crown Prince Mohammed bin Salman and Israel’s normalization agreements with Muslim and Arab states. Whereas Cohen had a seat at almost every table, Kochavi was excluded from the room, along with his boss, Netanyahu’s political foe Defense Minister Benny Gantz.

Cohen displays natural political abilities, an easy charm and people skills, all important attributes for a politician. He is also one of Netanyahu’s best students. He has seen up close how the master politician extricates himself from impossible political and diplomatic situations, politically eliminates rivals and sees into the future. Cohen is highly sophisticated, familiar with Netanyahu’s weaknesses and realizes that any overly independent move on his part could be viewed as a challenge and result in exile.

According to a political source who has working contacts with Cohen and spoke on condition of anonymity, “He has seen Netanyahu land an ax so many times on anyone who dared raise their heads and challenge him politically. He knows that in this arena, Netanyahu is the best in the game. Being a natural born politician, he will bide his time and avoid any move that could be interpreted as disloyal.”

Kochavi displayed confidence and courage in his comments on Iran. He projects power with both his uniform and his understated charisma. Cohen seems to have learned from Netanyahu how to strike at potential rivals as soon as they pop up.