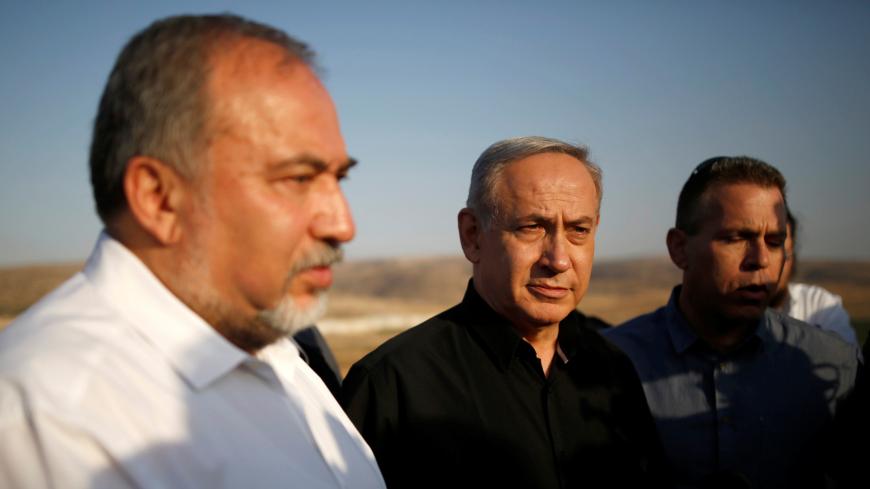 Israeli Prime Minister Benjamin Netanyahu’s multiyear tenure is now entering its most dangerous phase: Netanyahu is losing his grasp over his own internal checks and balances system that, in the past, caused him to avoid security-related “adventures.” Now he is itching for a fight and wants to “leave his mark” on Jewish history. This issue was analyzed in an Al-Monitor article several months ago, but it seems that now he — and we — may be entering the point of no return.

Netanyahu will be investigated Oct. 5 one more time, but this doesn’t ruin his good mood. On Sept. 28, it turned out that Netanyahu has a major role in the drama that is playing out under the radar (mainly), regarding the appointment of the Israel Defense Forces next chief of staff. Netanyahu is making it hard for Defense Minister Avigdor Liberman to conduct an organized, transparent process for the appointment of a successor to Gadi Eizenkot; the latter is expected to return the keys on Jan. 1. Netanyahu favors the appointment of the youngest, least experienced contender among the four candidates. His goal: to receive a docile, submissive chief of staff who will owe his appointment to the Big Boss in Jerusalem.

“Netanyahu has reached a crucial, decisive stage in his life as a leader,” an associate of Netanyahu told Al-Monitor on condition of anonymity. “He has sworn not to leave his seat until he clearly and sharply 'settles' the Iranian issue. He will not stand for a know-it-all chief of staff or heads of the branches of Israel’s security forces who think too independently and can do to him what they did in 2010 and 2011. Netanyahu is jockeying for a situation in which the heads of the security branches will carry out orders verbatim. He does not want people who can steal the show from under him.”

The main player in this appointment process is traditionally the defense minister. He is supposed to bring the name of the desired person to the government plenum for approval. The prime minister has a monopoly over what takes place in government meetings; he can even decide not to place the appointment of the chief of staff on the agenda, which may well turn the defense minister into a hostage should he not align himself with the Big Boss. Nevertheless, prime ministers generally try to avoid intervening in the process as much as possible. They stand on their rights to interview the candidates and remain in the picture, but at the end of the day it is still the defense minister who makes the recommendations and brings the decision to the government for a vote.

But Netanyahu decided that this year, he will stick to his guns. Past traumas caused by dissenting chiefs of staff are still fresh in his memory. It began in his first term of office in the 1990s, when his bitter rivalry with Chief of Staff Amnon Lipkin-Shahak led to the creation of the Center Party that contributed toward Netanyahu’s failure in the 1999 elections. This continued in the period between 2009 and 2011, when Netanyahu tried to recruit the support of the army for attacking Iran’s nuclear infrastructure. That was when he was confronted with a group of security chiefs rejecting his stance. He ran afoul of Chief of Staff Gabi Ashkenazi, Mossad head Meir Dagan, Shin Bet head Yuval Diskin and IDF Military Intelligence Directorate head Amos Yadlin — all of these fiercely opposed him. Theoretically, a prime minister can garner a majority in the Cabinet and take action despite the opposition of the security branches’ heads. But under such circumstances, the defeat and failure of an operation would spell catastrophe for the prime minister, would involve a committee of inquiry and probably culminate in resignation in disgrace.

The heirs of these very senior defense personages also did not bode well for Netanyahu: Chief of Staff Benny Gantz and Mossad head Tamir Pardo continued to fiercely oppose an action in Iran. Thus, Netanyahu was “stuck” because even his then-Defense Minister Ehud Barak backed down and decided to restrain his boss’ foolhardy aspirations for conducting a military strike deep in Iran.

As of today, the situation has changed: This is a different Netanyahu. He is no longer that hesitant, apprehensive leader who avoided conflict so as not endanger his tenure. The 2018 Netanyahu Model knows that it is only a matter of time until he is served with an indictment. His amazing, against-all-odds victory in 2015 encouraged the development of a messianic-type viewpoint and the assumption that no one is capable of threatening his rulership. He knows that the current president in Washington will back up any Israeli security "adventure." Or at least, that is what Netanyahu thinks. Iran is weakening, its economy is crashing and it lacks the ability to deliver real military reprisals against Israel on the Syrian front. Two years of unremitting Israeli assaults on Iran’s efforts in Syria to become a stronger presence have garnered quite a few tactical successes.

Most important of all: Mossad head Yossi Cohen works closely with Netanyahu (after serving as Netanyahu’s national security adviser); the head of the IDF Military Intelligence Directorate is now Tamir Heiman (recently appointed). All that remains for Netanyahu is to appoint a convenient yes-man chief of staff who will not stand in Netanyahu’s way of ratcheting up the pressure on Iran. An associate of Netanyahu recently told Al-Monitor on condition of anonymity, “Netanyahu has no intentions of backing down. He will not part from his role as premier before he resolves the Iranian threat, once and for all. This is his mission, this is his historic role.”

Among the four contenders for the role of chief of staff, two already served as deputy chiefs of staff, which is viewed as a mandatory position on the way to the top of the pyramid. They are Gens. Yair Golan and Aviv Kochavi. Golan had to abandon the race because of a speech he delivered in May 2016 that was perceived as too political for Israel’s solemn Holocaust Day. That leaves Kochavi, now deputy chief of staff; he had also served as head of the Northern Command (a "necessary requirement" these days since the northern front is the IDF’s main challenge). Kochavi also served as director of Military Intelligence and as former commander of the Gaza Division.

But Kochavi is perceived as a “prince”: He bears the charismatic figure of an experienced officer, self-confident and capable of going into politics after he takes off his army uniform. And these are exactly the qualities that work against him in Netanyahu’s eyes. The other two candidates — Gens. Eyal Zamir and Nitzan Alon — are less experienced and younger.

In normal times, Netanyahu would not appoint a rather junior officer to the position of chief of staff, knowing that a future committee of inquiry might one day blame him for doing so. He would go with the "sure bet." But these are not normal days; Netanyahu is in a hurry. In the next few days, he will have to decide whether or not to have early elections, at the beginning of next year. Meanwhile, he is ratcheting up the pressure on Iran, day by day.

As we know, Netanyahu made an appearance Sept. 27 at the United Nations General Assembly meeting where he revealed fresh intelligence material regarding Iran. On Oct. 3, a mysterious WhatsApp message was sent to thousands of Beirut residences warning them that "near your home a Hezbollah site has been established." Netanyahu is setting up optimal conditions to enable him to reach the pinnacle of his years in office: He wants to duel with Iran in the light of day, as he has dreamed about since his youth. It is possible that this stage will pass and, at some point, the original cautious, calculated Netanyahu will return to grasp the leadership rudder. If not, then everything will be ready for Netanyahu to finish his historic mission: Defeating Iran.