Has Israel’s army become too small? 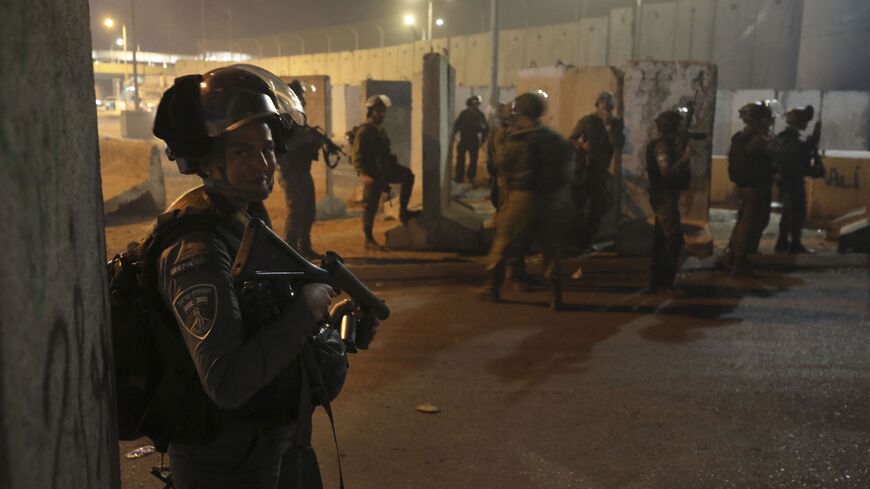 Israel Defense Forces soldiers throw tear gas canisters at Palestinian demonstrators during an anti-Israel demonstration over tensions in Jerusalem at the Qalandiya checkpoint between Ramallah and Jerusalem, in the occupied West Bank, May 11, 2021. - ABBAS MOMANI/AFP via Getty Images

The outgoing deputy head of the Israel Defense Forces, Maj. Gen. Eyal Zamir, is not big on interviews and rarely speaks in public. At a handover ceremony for his successor Maj. Gen. Herzl Halevi this week, Zamir dropped a bomb. Zamir, who was tasked with the IDF’s force buildup, essentially said that the IDF is not big enough and could find itself lacking the critical mass it needs to defeat Israel’s enemies.

“We could be facing a long, heavy, multi-theater campaign, combined with domestic challenges,” Zamir warned. To overcome these threats on its borders and to its heartland, Israel needs “decision-making ability, breathing space and a strong reserve,” he added. “In my opinion, the IDF is on the verge of the minimum size needed to face more complex threats than those we have experienced in recent years. Along with advanced technological capabilities, Israel also needs a critical mass of people to improve the IDF’s overall quality and quantity,” Zamir said.

Zamir’s warning was prompted by the latest round of fighting between Israel and Gaza and an unprecedented quasi-uprising by small groups of Arab residents in Israel’s mixed Jewish-Arab towns. As the rioting and fighting were underway in May, several rockets were fired from Lebanon into Israel, though the northern front remained calm.

The simultaneous violence rang alarm bells for the top IDF’s brass given the police’s initial failure over several days to quell the domestic rioting even as the IDF was bombing targets in Gaza. This convergence of threats prompted doubts among senior office holders regarding the IDF’s capacity to deal effectively with a simultaneous attack on Israel by Hezbollah, Hamas, Arab-Israeli citizens and perhaps other elements such as Iran, its proxy Shiite militias or the Islamic State group in Sinai.

The force level of the IDF’s regular and reserve troops, and especially of its ground army, has declined gradually and consistently over the past 15 years. The government slashed defense spending at the beginning of the millennium, then raised it a bit following the 2006 Second Lebanon War, but overall, today’s IDF is far smaller than it was during Israel’s first half-century.

The budget cuts reflected the decline or disappearance of the conventional enemies that threatened Israel’s existence in the past. Its one-time major enemies, Egypt and Jordan, adhere to the peace agreements they signed with Israel. The civil war has greatly eroded the power of Syrian strongman President Bashar al-Assad. Lebanon is mired in chaos and verging on bankruptcy. There are no longer armored divisions massed along Israel’s borders and the contemporary threat landscape has changed completely. The IDF has invested most of its energy and resources in a new array of modern-day resources: cutting-edge technology, cyber abilities and intelligence, making it what is considered one of the world’s most highly advanced military forces.

But a stubborn prophet of doom has been unsettling Israel’s defense agencies. Maj. Gen. (res.) Yitzhak Brick is a Suez Canal hero of the 1973 war with Egypt, an armored corps veteran who served for a decade as the IDF’s ombudsman. He has since devoted his life to dire warnings about defense cuts and the declining power of Israel’s ground forces, claiming the IDF was atrophying and no longer prepared to physically defend the State of Israel.

Brick’s was long a lone voice in recent years, but now a serving general, the deputy chief of staff of the IDF, has joined his one-man band. “We are scraping the very bottom of the barrel in terms of tank numbers,” a former top IDF source told Al-Monitor on condition of anonymity. “The number of combat divisions has also been stagnant for years, the ground forces are not holding enough exercises and most importantly, the reserve forces have undergone accelerated cuts. The IDF is no longer the people’s army and the reserves are no longer the secret of Israel’s power. This is troubling,” he added.

The IDF is suffering a personnel shortage, especially in the field combat units. One of the root causes of this crisis is the growth of the Arab and ultra-Orthodox Jewish populations, who are not conscripted. These groups now account for nearly 50% of the draft-aged cohort. A decline in the motivation of young Israelis to sign up for combat units along with increased interest in reserve service and service in the IDF’s technological units also contribute to the problem, as does the recent shortening of mandatory military service from 36 to 30 months.

“Our enemies have realized,” said the former top military source, “that if they operate simultaneously, their prospects of success increase.” Israel has in the past won multi-theater wars, such as the 1948 War of Independence (repelling an invasion of the fledgling state by several Arab armies and Palestinian groups), the 1967 Six Dar War (vanquishing three Arab states and Iraqi reinforcements) and the 1973 Yom Kippur War (overcoming a combined surprise attack by the Syrian and Egyptian armies).

However, the IDF had thousands of tanks and hundreds of thousands of reserve troops in those days. This is no longer true and during the recent Operation Guardian of the Walls, the IDF found itself for the first time in many years dealing simultaneously with several arenas. “And this is even without Hezbollah intervention,” the former military official told Al-Monitor. “Hezbollah’s firepower is 10 times that of Hamas, its ground forces are trained and very experienced, its fighters have gained self-confidence during the Syrian civil war and it is also advanced in terms of intelligence, operational ground forces and even technological means. We must be able to fight on several fronts at the same time and win. Right now, I am not sure that is the case.”

One of the ideas to emerge recently in this regard is the formation of a national guard under the purview of the police of reserve soldiers who undergo specialized training. This force of several battalions will beef up the police in quelling domestic riots that could disrupt the call-up of military reserves and the movement of IDF troops in times of war, leaving the IDF free to deal with external enemies. The idea, proposed recently by IDF Operations Chief Maj. Gen. Aharon Haliwa, is in its infancy.