The IDF's new strategy document declares Iran's nuclear program non-threatening and instead prepares to deal with attacks by Iranian proxies and other armed organizations in the region. 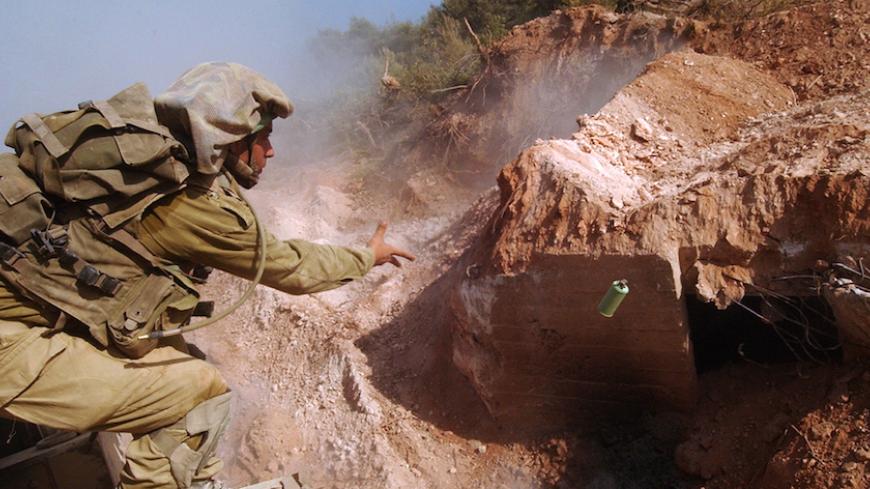 An Israeli soldier throws a gas grenade toward a Hezbollah bunker that was uncovered in southern Lebanon Aug. 27, 2006. - REUTERS/IDF/Handout

On Aug. 14, Israel Defense Forces (IDF) Chief of Staff Gadi Eizenkot issued “IDF Strategy,” a precedential, perhaps even historical, document. It marks the first time that the strategic program of the IDF has been released to the public, in a censored version. Operational data and numbers only appear in the classified version. This document outlines the IDF's objectives and missions, states how its successes or failures will be defined and identifies what modes of action are needed to achieve success.

The report exemplifies the maturity of the IDF, which after quite a few formative experiences, has finally internalized the reality that the old world is no longer. The era of speedy victories has ceased to exist, as have some of Israel’s old enemies and the entire old Middle East. We are in a new era, and we should adjust our expectations, as well as our forces, accordingly.

Commentators have marveled that the Iranian nuclear threat is barely mentioned in the document. According to the chief of staff, that threat is currently not sufficiently relevant to be included in the IDF's strategy for the next five years. The threat can be shelved for a decade or two.

The document also confirms something published in Al-Monitor a few weeks ago: that the IDF top brass are far less melodramatic about the Iranian threat than Israel’s highest political echelons, i.e., Prime Minister Benjamin Netanyahu and some of his ministers. Instead, the IDF is much more concerned about potential Iranian involvement in considerable proportions of terror acts against Israel along the length of its various borders.

Israel’s map of threats, which once included a list of states, now contains a list of organizations: Islamic State (IS), Hamas, Hezbollah and so on. The IDF has updated its mode of action and battle order accordingly. Much effort has been invested in its ability to fly large forces to distant sites on aircraft with “high survivability” to carry out precision surgical strikes against consequential terror targets. All IDF special units receive high priority and are dealt with at the General Staff level, and even above-General Staff level, with regard to resource concentration, planning and inputs of non-IDF intelligence and espionage organizations, including various government ministries.

So, how are the IDF's goals now defined? Victory in its previous format is out. The new goal is “achieving diplomatic aims set for the battle in a way that will lead to the improvement of the security situation after the conflict.” No more statements and declarations about toppling the Hamas regime, defeating Hezbollah, or destroying organization X. The IDF often went in big and came out small. Now it wants to go in small and exit somewhere in the middle. This is an issue of adjusting expectations.

Once upon a time, the IDF’s main reference scenario was the so-called big event, in other words, a large-scale assault or invasion of Israel’s enemies, led by the conventional armies of Egypt and Syria, on its borders. Today, however, that scenario no longer has credence. The Syrian army has been wiped from the map of threats for at least the next decade, and Israel enjoys strategic cooperation with Egypt and Jordan. What is left is Iran, with its strategic terror arms in the area, i.e., Hezbollah and Hamas, and the Sunni jihad organizations like IS, Jabhat al-Nusra and their ilk.

The IDF also adjusted its battle order and has made significant changes in the structure and operation of Israel’s military power to adapt its might to the new challenges. The method is simple and was copied from the US military doctrine of shock and awe, or rapid dominance — yes, the one used in Iraq. Israel’s Northern Command has plotted tens of thousands of targets in Lebanon, and its Southern Command has prepared thousands of targets in the Gaza Strip. Should a flare-up occur, the plan is to attack thousands of targets a day while exploiting Israel’s particular capabilities in real-time cross-checking of field intelligence for the use of interception tools and deadly strikes of almost unlimited range and precise hits, with tens of targets per sortie. All this is more expensive, more complicated and more complex than operations in the past, and Eizenkot hopes to exploit the coming decade — a decade devoid of the Iranian nuclear threat — to adapt his new army to its emergent goals.

At the same time, expectations have been adjusted in the defensive sphere as well. The IDF has no plans to take over extensive territories, to topple rulers or eliminate terror organizations. It recognizes that during a future military clash, the opposing organization might indeed enjoy temporary, localized territorial success. It is impossible to guard every single locality all the time, so the IDF will focus on achieving an “improvement of the security situation” at the end of such a conflict and safeguarding Israel’s territorial integrity as well as the security of its civilians.

Perhaps by coincidence (or maybe not), a special briefing was held for military correspondents Aug. 16 on the Golan Heights. It was attended by the head of the Northern Command, Maj. Gen. Aviv Kochavi, a former director of Military Intelligence whose name had come up for the chief of staff post after Eizenkot, and almost the entire command headquarters staff. The briefing covered a large, division-wide IDF maneuver held the previous week on the Golan in which ground forces mounted a simulated, limited ground operation on Syrian territory against IS forces that tried to invade Israel and then retreated.

During the briefing, additional data about the northern zone were disclosed to the media. Israel no longer faces enemy states there, but terror organizations in both Syria and Lebanon. In Syria, there is Iran and Hezbollah in the north and IS in the south. In Lebanon, there is Hezbollah, which conspicuously cooperates with the Lebanese army on joint patrols along the length of the Israeli border. Top Israeli officers noted that these mobile patrols make use of vehicles and weapons that had been provided by the United States and are now serving Hezbollah via a “subcontractor”— the Lebanese army.

The IDF maneuver simulated a major attempt at a terror attack on Israeli territory by dozens of IS fighters, similar to the July attack perpetrated against the Egyptian army in Sinai. In the simulation, the IDF first repulses the IS forces and then conducts a military land operation deep into enemy territory to damage and destroy the bases from which the terrorists operated. By the way, the Israeli officers described IS as “a threat that is not militarily significant, does not differ from the other groups in the region, and lacks any kind of impressive strategy.” We have to hope that this assessment is on target.

The military exercise signals to players in the field that Israel will not hold back, but will respond forcefully to any scenario. Simultaneously, Israeli security sources emphasize that so far, all the terror activities against Israel in the northern zone have been perpetrated by Hezbollah, under Iranian inspiration. Not a single bullet, not even a firecracker, has been fired against Israel by the various organizations rebelling against Syrian President Bashar al-Assad. Israel hopes that this situation will continue, and to be on the safe side, it tried to demonstrate what would happen if the situation changes.