Israel's Operation Northern Shield will not only neutralize Hezbollah's attack tunnels, but also allow the completion of a massive construction project to defend the border. 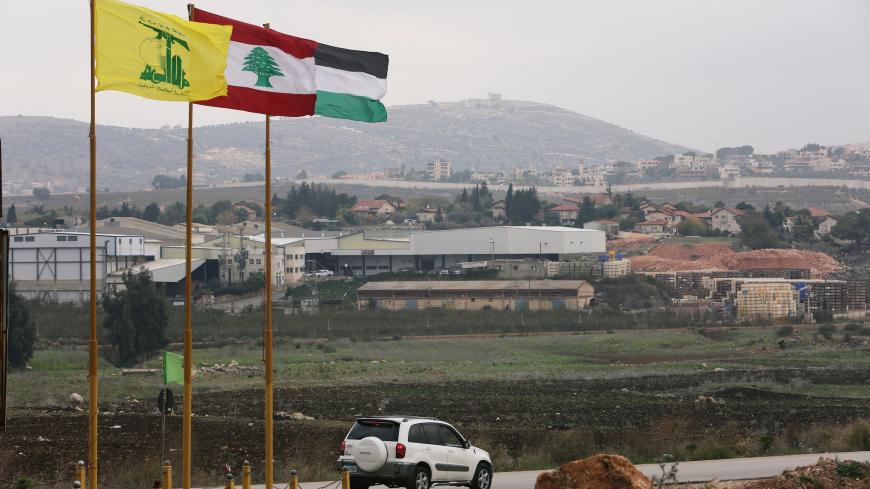 The flags of Hezbollah, Lebanon and Palestine flutter near the border with Israel in the village of Khiam, Lebanon, Dec. 4, 2018. - REUTERS/Ali Hashisho

The quiet on the Israel-Lebanon border had never been this tense. From the beginning of Operation Northern Shield on Dec. 4, Israel has been locating, marking and booby-trapping terror tunnels dug by Hezbollah into its territory, with the ultimate intention of blowing up the tunnels. Thus, a rather bizarre situation has been created on the Blue Line, the border between the two states outlined by the United Nations in 2007 after the Second Lebanon War. The Israel Defense Forces, with its special forces and engineering tools, is working diligently with heavy drills and bulldozers to uncover tunnels on the southern side. Only a few meters away, the Lebanese army is openly observing them, while Hezbollah watches covertly. Add the Lebanese media, some members of which are affiliated with Hezbollah, making themselves comfortable on the Blue Line only five meters from the Israelis. The two sides, armed to the teeth, stare at each other from practically zero range. Both are apprehensive of a spark that would set the region on fire.

For the Israelis, the operation is advancing according to plan. The only mishap has been a diplomatic one: For the first time in a long while, the United States refused to stand up for Israel and impose sanctions on Lebanon. Israeli policy, which views Lebanon and Hezbollah as one entity, has not yet been fully accepted by Washington. The Americans have committed to further pressuring Hezbollah and imposing additional sanctions, but are determined to maintain efficacious relations with the Lebanese government. It has taken much of the wind from Israel’s diplomatic sails because Israel constantly emphasizes that in the next confrontation, it will “send Lebanon back to the Stone Age.” In other words, attacks by Hezbollah would be met with an Israeli military response that would also target Lebanese infrastructure. This stance is in direct contrast to the policy of former Prime Minister Ehud Olmert in the Second Lebanon War. At this stage, both sides are focusing on not getting ahead of themselves and being dragged into “the next conflict” in the coming days. It is not easy for either side.

Israeli Chief of Staff Lt. Gen. Gadi Eizenkot, who is scheduled to step down in the middle of next month, views the removal of the tunnel threat on Israel as a strategic goal. On the southern front, Israel is very close to announcing that no tunnels remain that extend from the Gaza Strip into Israeli territory. In the northern front, it will take many long months to get to this stage, but according to the chief of staff, it will be an amazing strategic victory that deprives Hezbollah Secretary General Hassan Nasrallah of the element of surprise. According to Eizenkot, Nasrallah planned to use the tunnels to catch Israel by surprise and send dozens or even hundreds of Radwan commando fighters, strengthened by Iran-affiliated Shiite militias, to stampede Israel’s home front.

The military balance of power between the IDF and Hezbollah clearly tilts to the IDF. However, no army can protect a long, mountainous and winding home front every moment of every day. For Nasrallah, it would be a historic and psychological achievement to take control of a neighborhood in the border town of Metula or infiltrate the edges of any other small Israeli locality near the border, even for a few of hours. It would certainly hurt the Israelis’ sense of resilience. And that’s even before talking about the possibility of Hezbollah entering a northern locality and capturing hostages. A Hezbollah flag in Metula, if only for a split second, would undermine Israeli self-confidence. It would evoke the nightmare of an Israeli locality falling into Arab hands. Such a thing has not happened since the State of Israel was established in 1948, and if it happened today it would tilt the Israeli-Arab balance of power. As far as Eizenkot is concerned, the odds against this happening have significantly declined due to the Northern Shield operation.

Israel hopes to exploit the tunnel operation to complete the massive construction project it has been working on along the length of the Lebanese border to make it difficult for Hezbollah militants to cross over suddenly and in large numbers. The project includes building a high wall along the length of the geography as well as deepening dry ravines and elevating natural cliffs and uprooting vegetation that could provide cover for potential intruders, creating a border that is clear and exposed, and thus easier to defend. Israel has not carried out this work in certain spots due to differences of opinion regarding the exact boundaries. Now that Israel is recruiting international legitimacy by acting against the tunnels and Hezbollah is on the defensive and keeping mum, Israel hopes to complete the work.

Much has changed since Hezbollah was a negligible terror organization whose leader Abbas Musawi was killed by an IDF helicopter attack in 1992. Today, Hezbollah is the strongest military power that threatens Israel on its borders. On the other hand, it does not constitute an existential threat to Israel and even Nasrallah knows it. Despite this balance of power, Hezbollah benefits from inflation of its might and ability to harm Israel. Even some Israeli spokespeople have said that the operation was designed to stop Hezbollah from “capturing the Galilee.”

“We exaggerate too much with regard to this organization,” a high-placed Israeli military source told Al-Monitor on condition of anonymity. “It is an organization that learned to operate military frameworks, it has accumulated experience and proved its abilities on the battlefield. It has a tremendous, lethal arsenal of rockets and missiles. Still, it knows its place and has not yet reached the big league.”

A former very senior IDF officer who is closely acquainted with the organization told Al-Monitor recently on condition of anonymity, “We’d be lucky if all our enemies were like Hezbollah. The organization has capabilities, but it also has a leader who is pragmatic, stable, understands what’s up. Nasrallah has built his political career on Israel and leverages it for his personal needs. That being said, he also understands the arena well and his hands are steady on the wheel. After the Second Lebanon War, Nasrallah admitted out loud that if he’d known that Israel would respond by going to war, he wouldn’t have abducted soldiers. When Nasrallah commands, there are orderly rules to the game, and that is preferable to chaos or vague threats.”