Why is Israel propping up Hamas in Gaza?

Israel is implementing a concerted policy of keeping Hamas in power on its southern border so it can focus its energies on threats from the north, especially the Iranian presence in Syria. 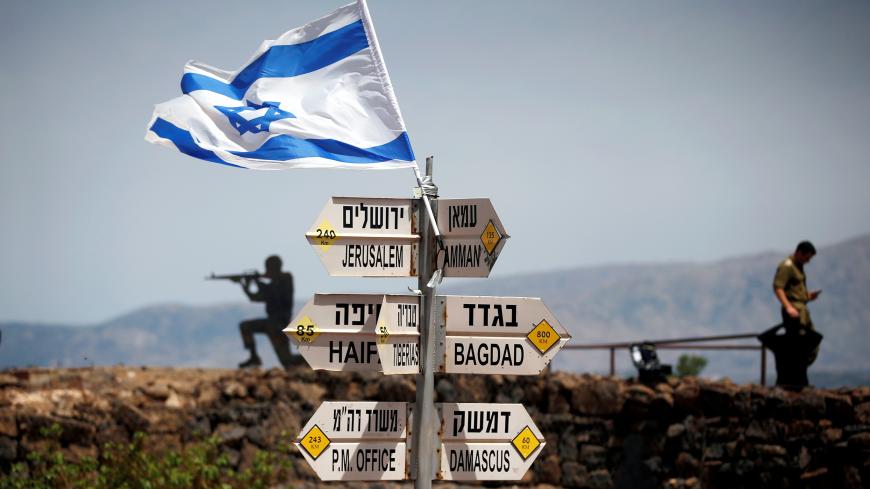 Over the last two years, Israel has employed two different and even contradictory military strategies: one on its northern front against Syria, Hezbollah and Iran, and the other on its southern front against Hamas, Islamic Jihad and other “recalcitrant” organizations in Gaza.

In the north, Israel is constantly on the offensive and — according to foreign reports — quick to threaten, initiate and exact a price from the enemy. In the south, however, Israel has adopted a cautious tone of containment and is on guard to avoid being dragged into a military confrontation. In short, Israel shows a lot less initiative in the south and takes Hamas’ needs into account. In the north, however, Israel uses all its strength to fan the flames of domestic Iranian conflicts and try to undermine the ayatollah-led regime. In the south, Israel uses all its strength to maintain and protect Hamas' rule.

Another mysterious aerial assault in Syria was reported on June 25, this time close to the Damascus airport. Several missiles, evidently launched from a fighter jet, struck trucks containing a shipment of weapons and ammunition that a little earlier had been unloaded from a transport plane that had arrived from Tehran. The attack is attributed to Israel, which is keeping quiet on the matter. It is the second attack in a week attributed to the Israeli air force on Syrian soil. No one has even tried to keep count of the strikes allegedly conducted by Israel since the beginning of the year.

The attacks are, ostensibly, a direct, determined continuation of Israel's policy of enforcing its redlines on the transfer of weapons and arms from Iran to the Syrian front and of anything that falls under the category of “Iranian consolidation in Syria.” The policy is based on a strategy presented by Chief of Staff Lt. Gen. Gadi Eizenkot to the Israeli Cabinet last May: frequent and ongoing use of force, real-time thwarting of all Iranian efforts to base itself in Syria and exacting an immediate price from President Bashar al-Assad's regime if and when the Iranians or Hezbollah retaliate against Israel from Syrian territory.

Prime Minister Benjamin Netanyahu has been uncharacteristically implementing the strategy with all his might and without blinking. Thus far, he hasn’t had to pay much of a price. When elements affiliated with Shiite militias in Syria tried to launch rockets at the Israeli-held Golan, Israel’s air force immediately responded by destroying a significant percentage of Iranian infrastructure in Syria and eliminating about half of Syria's anti-aircraft deployment on May 10. Netanyahu, who has always distanced himself from military conflicts, “adventures” and provocations, has changed his tune and is now going all the way on the northern front.

On June 26, Netanyahu uploaded a video to YouTube in which he speaks to the Iranian people in English to praise Iran’s national soccer team for its performance in the FIFA World Cup competition against Portugal and its star player, Ronaldo. Netanyahu then says, “Can you imagine what your money could do if it was not spent promoting terrorism, in Syria and in Yemen?” Defense Minister Avigdor Liberman was even blunter when he posted a message on social media in Persian, blaming the Islamic Revolutionary Guard Corps and Gen. Qasem Soleimani for squandering Iran’s resources on terror activities. Liberman also praised the relatively successful Iranian performance in the World Cup.

According to a senior Israeli Cabinet member who spoke to Al-Monitor on the condition of anonymity, “The prime minister and defense minister are implementing a specific policy, the main foundation of which is to enforce Israel’s redlines in Syria."

“These redlines are backed up by direct, spoken messages aimed at the Iranian people with the goal of speeding up the fall of the Tehran regime,” the source added. The policy is also based on intelligence reporting that new sanctions imposed by the United States on Iran are having a dramatically negative impact on the Iranian economy. This, in turn, is causing internal Iranian agitation.

What about Israel’s south? It is exactly the opposite. Despite Hamas being viewed as the long arm of the Iranian Revolution, Israel is extremely careful not to rock the Gaza boat too much or do anything that might, including accidentally, cause Hamas to fall.

“Netanyahu and Liberman are going to great pains to protect Hamas,” a former highly placed security source told Al-Monitor on the condition of anonymity. “They do not want to overthrow the Hamas regime, and they block the return of the Palestinian Authority to the Strip because the present situation is convenient for them. So long as Hamas rules Gaza, the Palestinian people are fragmented, and Israel has no real partner for any kind of negotiations. In addition, Israel is doing everything possible to avert another round of violence between itself and Gaza during the summer. There are two reasons for this: The first is because Israel’s efforts are concentrated on the northern front, and Liberman-Netanyahu do not have the energy to invest in Gaza now. Second, because the two realize that another round of fighting in Gaza has no purpose and would only cause more damage. Both sides would return to the starting point without achieving anything.”

A former senior military source told Al-Monitor on the condition of anonymity, “It is better to wait another year or year and a half before marching into Gaza when the underground obstacles [constructed by Israel] will be in place and the tunnel threat will be totally neutralized.”

Given the current situation, the Cabinet agreed to the Israel Defense Forces policy of not directly thwarting the cells of Gaza residents releasing burning kites and helium balloons containing flammable substances or explosives. The air force finds itself firing “near the launcher cells” and not directly at them and hindering the cars and other vehicles of the launchers but not the launchers themselves, as happened June 26. This was also the reason that Liberman offered an upgraded deal to Hamas earlier this week: construction of a special platform at a Cypriot port that would function as a seaport for Gaza. Israel would oversee the merchandise unloaded there and transferred directly to Gaza by boat. In exchange, Israel is demanding the return of the bodies of the soldiers Hadar Goldin and Oron Shaul as well as two Israeli citizens held by Hamas in Gaza. At this stage, Hamas has declined the offer, which will now serve as the basis for continued, indirect contacts between the sides.

In any event, the proposal achieved its purpose. It demonstrates an Israeli initiative to improve the harsh circumstances in Gaza. Israel is doing all this in the south to gain time to advance efforts on the major playing field in the north. Its goals with regard to Iran are to distance it from the border, prevent Iranian consolidation in Syria and support the Iranian civil protest movement in Iran. In addition to these goals, Israel will also have to decide in the next few days what to do about a new offensive by the Syrian army and its partners in the south. The offensive threatens to even retake the part of the Golan held by Syrian rebels.

Israeli policies have turned the Golan into a focus of Israeli interests. Will Israel close its eyes, clench its teeth and reluctantly accept Assad’s return to Quneitra? The next few days will provide an answer to this question.