Several signals indicate that Prime Minister Benjamin Netanyahu is willing to compromise on the Gaza Strip and reach an agreement with Hamas in order to avoid another escalation. 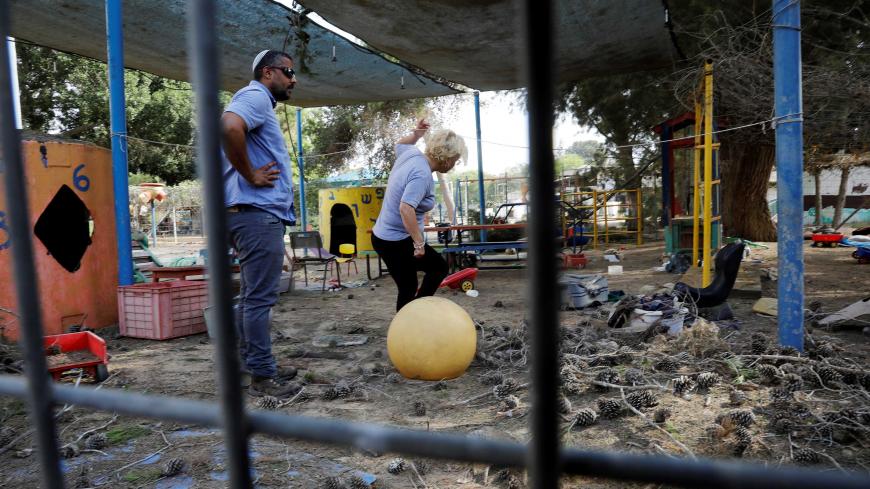 People stand in a kindergarten yard, damaged by mortar shells fired from the Gaza Strip, in a kibbutz on the Israeli side of the Israeli-Gaza border, May 29, 2018. - REUTERS/Amir Cohen

A mortar shell landed May 29 in the yard of the Shibolim preschool in one of the kibbutzim bordering the Gaza Strip. The shell hit a eucalyptus tree, which provided shade to the playground, and exploded in the yard. The incident happened half an hour before the young children were supposed to go out into the yard to play. Because the preschool is so close to Gaza, the children and their caregivers are given just 7-12 seconds of warning whenever Hamas or Islamic Jihad fire rockets. Often the “red alert” alarm coincides with the shells’ impact. At other times, the sirens go off a few seconds after a shell has already landed. Had they hit the preschool this time, Gaza would now be engulfed in the flames of war. An event like this is a real nightmare scenario for Israel because the cost is so simple to calculate: War! Now! Israel would have invaded the Gaza Strip, this time in order to conquer it, even if it didn’t want to do that.

Chief of Staff Lt. Gen. Gadi Eizenkot toured the region in the afternoon and paid a visit to the preschool, for which his army almost went to war. Although the shell had hit only a few hours before, almost all the children were still present. Eizenkot thought that he would encounter fear, silence or sharp criticism. Instead, the hour he spent at Shibolim was the most pleasant stop on his entire visit to the south that day. The children seemed cheerful and happy, and the staff positive. IDF spokesman Brig. Gen. Ronen Manelis later told Al-Monitor that this was “the best meeting to assess the situation that the chief of staff has had recently." He added, "There is no better way to learn about the resilience of the Israeli home front and how it stands firm, even when faced with an experience like that.”

That’s how wars break out in the Middle East. They sneak up to center stage when no one wants them, and surprise everyone. The fighting that erupted yesterday between Hamas, Islamic Jihad and Israel was the first major outbreak of real violence since Operation Protective Edge in 2014, and it happened right in the middle of sensitive strategic efforts between the parties — mediated by Egypt and Qatar — to achieve a long-term cease-fire.

Hamas and Islamic Jihad fired more rockets at Israel May 29 than in the past four years combined. Exactly when Prime Minister Benjamin Netanyahu was about to make a difficult decision over certain concessions in Gaza, he was confronted with this entirely different reality. This sort of situation was best described once by the outgoing Coordinator of Government Activities in the Territories Maj. Gen. Yoav Mordechai. Speaking to Al-Monitor, he compared the Gaza Strip to a pressure cooker. The opening stages are the same; the pot is filled with water, sealed and put over a low flame. If the steam building up inside is not released, the pot will explode. When Hamas has its back to the wall, the explosion will inevitably come. The fact that Hamas is directly responsible for the suffering of the people in Gaza, or that if it changed its policies there would no longer be any need for the closure, is totally irrelevant. Israel is the responsible adult in the region, even if it never chose to be that, even if it has failed to break free of the cycle of violence that spirals into another round of fighting every two or three years and even if it did withdraw from the Gaza Strip, clearing the territory to the very last inch. The dead end in Gaza leads the parties into a ritual brawl with frustrating regularity, and there is no one around to say “Stop it! That’s enough!”

Sources in the know on Netanyahu's thinking told Al-Monitor that in the past few weeks the prime minister has made a strategic decision to truly try achieving a stable cease-fire in Gaza, and that Israel has given Egyptian and Qatari mediators the green light to deliver the goods. Israel is supposed to ease the closure and take real steps to benefit Gazans, even as Hamas gets stronger. In exchange, Hamas will stop digging terror tunnels and firing rockets at Israel and return the bodies of Israeli soldiers Hadar Goldin and Oron Shaul, as well as the three Israeli civilians being held in Gaza.

It all looked and seemed very sensible and reasonable. Netanyahu had decided to lower tensions along the southern front at the request of the Americans, too. Ever since US President Donald Donald Trump entered the Oval Office, Netanyahu has benefited from unprecedented US protection no matter what he does. This is particularly true of the raging northern front, where foreign sources report that Israel continues to attack Iranian targets on an almost daily basis. To reduce some pressure on the White House, it has become necessary to extinguish the steadily burning fire in Gaza; Netanyahu realizes that he has no other choice. It was at the peak of this realization that the current round of violence erupted.

That's the reason why the IDF promised May 29 that it would respond harshly to massive rocket fire, only to make do with bombing Hamas infrastructure targets. It was part of a covert effort not to cause too many casualties on the other side, since that could lead to escalation and war. Netanyahu knows that a “big move” — if not a “huge move” — is taking shape in the north, with the direct involvement of the Russians and Americans. In it, the Russians will agree to push the Iranians out of Syria, while Israel will agree to allow Syrian President Bashar al-Assad’s army to return to southern Syria, including the Golan Heights border region. In exchange, the Americans will consider lifting the sanctions imposed on Moscow as a result of the crisis in the Crimean Peninsula. If this happens, it will be Trump’s big chance to get back at the Europeans for failing to join him wholeheartedly in his anti-Iran maneuvering.

Given the current state of affairs, Netanyahu prefers to continue with his achievements in the north, even if it means giving up on the south. He has made this choice knowing full well that it could lead to intense criticism from the right, something Netanyahu is particularly loath to accept. By the morning of May 30, Minister Zeev Elkin (Likud) said that Israel’s response to the rocket fire from Gaza was too weak. Other sources on the right believe that Israel should never have walked away from the current round of violence without reinstating its ability to act as a deterrent. What happened May 29 not only failed to renew that capacity, it actually weakened it.

At the same time, it's clear to everyone that it is Hamas — not Israel — that is facing a dead end. Over the last nine weeks alone, Hamas has lost its assets and its last hope. The Great Return March protests along the border fence led to nothing, apart from dozens of casualties, most of them active members of terrorist organizations. The attack tunnels are still being blocked by Israel. In the middle of yesterday's firefight, Israel destroyed a strategic tunnel exiting Rafah, entering Egypt and then breaking north into Israel in what is being called the “U-route.” The Palestinians were trying to use this winding route to circumvent Israeli obstacles underground, while disguising the tunnel as a normal smuggling tunnel between Gaza and Egypt. But even this attempt was discovered and thwarted.

Hamas is now realizing that its options in dealing with Israel are few, and that hunger and unemployment are spreading across Gaza accompanied by collapsing infrastructures, four hours of electricity a day and a pervading sense of desperation. All of that should lead to an escalation, as it always does. So, what happens now? Hamas has no idea. Neither does Israel. The magic circle of violence has not been broken. While everyone hopes that a full-blown conflict has been avoided this time, they are still waiting for the next time.