Israeli leadership refuses to recognize the reality and admit that its Gaza blockade policy failed in toppling Hamas rule. 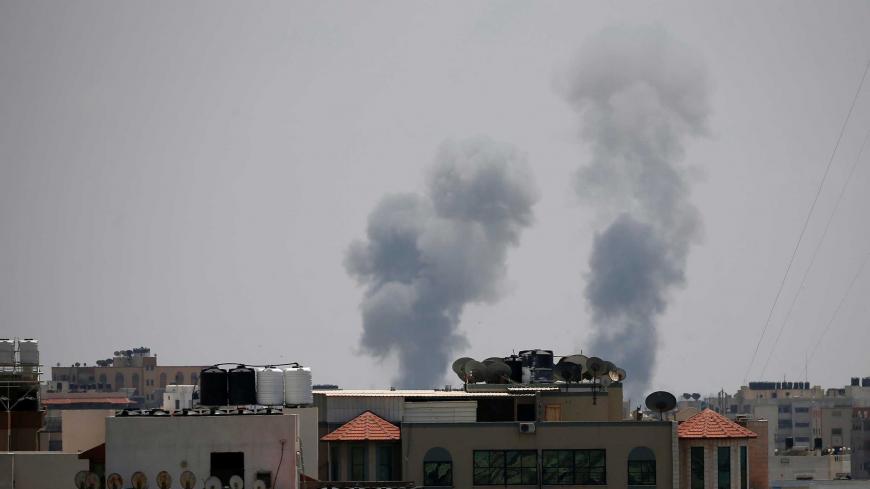 Smoke rises following an Israeli airstrike in the Gaza Strip, May 29, 2018. - REUTERS/Suhaib Salem

Several hours after the cease-fire between Israel, Hamas and Islamic Jihad went into effect May 30, and quiet returned to Israel’s south, the security Cabinet convened in Tel Aviv. The ministers discussed the lessons to be learned from the last confrontation a day previously with a shower of mortar bombs fired from the Gaza Strip. But it seems that they focused on the wrong aspects of the conflict: They mainly discussed security and military-related issues when the important, burning problem related to Gaza is the political-diplomatic one.

Throughout the 24 hours in which dozens of mortar bombs and rockets were fired at Israel’s southern localities, and Israel’s air force bombed targets in Gaza in response, government ministers brought up dozens of suggestions regarding how to solve the security problem called “Hamas in Gaza.” Cabinet member and Energy Minister Yuval Steinitz said in an interview with Ynet, “It is likely we won’t have a choice but to strike Gaza and conquer it and put an end to this terrorist regime once and for all.” Education Minister Naftali Bennett, another Cabinet member, said during a tour of the Gaza-envelope region in Israel, “Escalation on the Gazan side was not coincidental. The mind is Iranian, while the hands belong to Hamas.” Cabinet member and Justice Minister Ayelet Shaked said, “All the options are on the table, including conquering the Gaza Strip.” Knesset member Bezalel Smotrich from their faction suggested “to conquer Gaza, disarm Hamas from its weapons and establish an Israeli settlement in Gaza.”

Almost all of the speakers that day ignored one simple fact: Gaza is a security threat to the residents of southern Israel because of the impact of the closure that has continued for more than a decade over Gaza's 2 million residents. As long as the closure continues, Gaza will not quiet down and rounds of fighting between the Israel Defense Forces and Hamas and the other Palestinian organizations will only become more frequent. There are those in the Israeli security apparatus who say this, as opposed to the members of the diplomatic-political ranks. But the politicians prefer “once and for all” aggressive solutions without taking into account the ramifications of conquering the Gaza Strip, and the price that it would involve.

Chief of Staff Lt. Gen. Gadi Eizenkot spoke clearly and incisively at a meeting of the government in February, saying, “We must make a real effort to avoid a humanitarian collapse in the Gaza Strip.” He warned that if the situation would continue without change, we should expect a military conflict in the south in a year’s time. Eizenkot’s words were right on target for what happened over the past few weeks, and last week specifically on the Gaza border. But then, and even today, Cabinet members including Prime Minister Benjamin Netanyahu and Defense Minister Avigdor Liberman ignore his warnings.

Another person whose good advice has long been ignored is Transportation Minister Yisrael Katz, who conceived the idea of building an artificial port opposite the Gaza coastline to provide for the needs of the Gazans. But Israel prefers to keep its eyes shut and believes that the Gaza skirmishes are an Iranian weapon that can be turned on and off at will. A similar simplistic explanation was also given for the fence demonstrations in recent weeks. Israel argues that the demonstrators marched to the fence because Hamas told them to do so, so as to serve as Hamas’ human shields and help Hamas wiggle out of its political-diplomatic crisis.

The criticisms leveled at Hamas, which invested a tremendous amount of the Palestinian public’s money in building up its military might and digging attack tunnels, is justified. Hamas was founded as a welfare movement and instead pushed rearmament to the top of its priority list. It abandoned the welfare institutions that had been so important to the founder of these institutions, Sheikh Ahmed Yassin. But there is another reason that Israel prefers to ignore: The demonstrators in Gaza protest the closure that is strangling them to death. And Hamas is also strengthening itself and rearming in order to break that same siege.

Ever since the closure was imposed on Gaza in 2007, Hamas has spoken to Israel several times about coming to a long-term cease-fire agreement that would be based on removal of the closure in exchange for security quiet. Israel ignored the offers because its leaders are (psychologically) hostage to the worldview of former Prime Minister Ehud Olmert, who first imposed the siege. Olmert thought that harsh economic distress in the Gaza Strip would cause the residents to bring down the Hamas regime. Many years have passed since then. Gaza is dying, but Hamas is still holding firm and Israel has never held even one serious, in-depth discussion to re-examine its relations with the Gaza Strip. State Comptroller Judge Joseph Shapira wrote about this last year in reference to Operation Protective Edge in the summer of 2014.

Compared to 10 years ago, Israel finds itself in a much more complex security reality at present. Three large military operations in Gaza, in which thousands of Palestinians were killed, have not improved the situation. After the exchange of fire this week, the security Cabinet agreed to a cease-fire with Hamas because they realize that conquering Gaza to destroy the Hamas regime is simply not realistic. The truth is that Israel prefers the Hamas regime in the Gaza Strip as sovereign, over the other alternatives.

Israel will soon face security challenges that are much more intricate than the Hamas-Gaza conundrum. Therefore, it is important that Israel’s diplomatic echelons are ready to make brave decisions to bring quiet back to the southern front. The northern border and growing Iranian presence in Syria are very worrisome, and Israel needs to concentrate all its efforts and security investments in the complex threat on the Syrian border. In addition, Palestinian President Mahmoud Abbas will likely retire soon and Israel’s security experts have reason to believe that the change of government may not go smoothly. Power struggles between Fatah’s hawkish factions in the West Bank will have an impact directly on Israel — and certainly on its security coordination with it.

Therefore, the time has come for all the Cabinet ministers, headed by Netanyahu and Liberman, to admit that the closure policy over Gaza has failed miserably. They must admit that the military operations — even if they provided temporary periods of quiet to the residents of southern Israel — only intensified the problem over time and sent Israel into a pointless security spiral.