Israeli residents near Gaza abandoned by the government

Israeli residents near Gaza are paying the price for the government’s lack of an effective policy on rocket fire from the Strip. 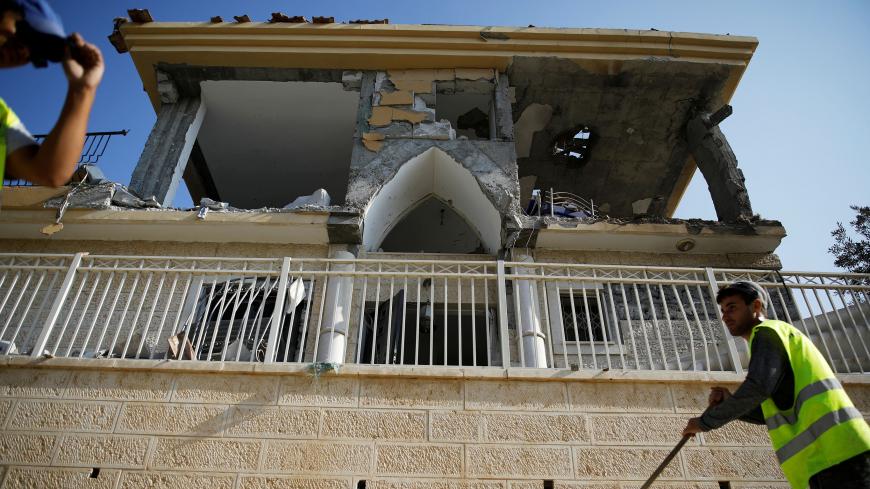 Municipality employees work next to a house that the Israeli military said was hit by a rocket fired from the Gaza Strip, in Beersheba, southern Israel, Oct. 17, 2018. - REUTERS/Amir Cohen

Dozens of rockets were launched this past weekend at localities in Israel’s south, sending tens of thousands of residents to protected spaces and shelters. As a result, this population began to organize, via social networks, a civil protest movement.

Seven months have passed since the campaign of incendiary kites began, destroying agricultural tracts in the Israeli communities adjacent to Gaza. Over the past few months, residents of these communities also have been confronted anew with routine of Code Red sirens, warning them against rockets fired from the Strip. However, it seems that only in recent days have the residents of the south internalized the fact that they are in the midst of a war of attrition and that the Netanyahu right-wing government has no plan of action for this war — except, of course, to make public statements.

On Oct. 28, several dozen Gaza-envelope residents made their way to Tel Aviv, where they blocked the Azrieli intersection and tried to make the public understand what their lives have been like. They broadcast Color Red sirens on microphones, lay down on the ground as they would do to protect themselves under real circumstances and brought their children to tell the media about their daily lives in the ongoing nightmare. On the following day they demonstrated at the Kerem Shalom crossing, and on Oct. 30 they blocked the Ashkelon junction. While these protests were covered by the media, it was not done prominently. All this leads us to think that perhaps the residents of the south are paying the price for the government’s lack of a real action plan for Gaza.

For months, the government was expected to craft some kind of plan: an arrangement or war. This was especially true in the last two weeks, after the home of the Tamano family in Beersheba was directly hit by a Grad rocket Oct. 17; it was a miracle that no one was hurt. The government of Israel is doing everything it can to dodge a military operation, yet it has had no success in reaching an arrangement, either. In fact, the government has little to offer besides demonstrations of empathy, belligerent rhetoric and measured, limited attacks from the air. In this reality, the Gaza-adjacent residents have come to understand that they are, in fact, being sacrificed on the altar of governmental indecision. Thus, the residents are preparing to escalate their protests.

Several hours after the Grad struck Beersheba, Prime Minister Benjamin Netanyahu visited the Israel Defense Forces Gaza Division. After hearing its evaluation of the situation, the prime minister met with the heads of the local authorities in the Gaza-envelope region and told them, “Israel views these assaults with great severity. … If these attacks do not stop, we will put an end to them. Israel will act with great intensity.”

That night, Netanyahu convened the Cabinet; the session lasted for five hours. Experts assessed that a war in Gaza was only a question of hours or perhaps days. However, the official announcement that was released after the meeting didn’t mention anything about a military operation in Gaza, merely stating that a decision was made to intensify IDF responses to events on the fence.

Thus, slowly but surely, the new reality in the Gaza-envelope region is seeping into public awareness: the routine of a war of attrition. On one side is Hamas. The group continues to taunt Israel from the border fence, although it has avoided escalation (in other words, it has not launched rockets toward central Israel). On the other side is the Israeli government. Netanyahu’s government continues to routinely release militant statements yet does nothing on the ground. It seems that as long as Tel Aviv is quiet, the containment policy is easier to swallow.

On Oct. 29, while the Gaza-envelope residents were organizing more protests, Defense Minister Avigdor Liberman addressed the tension on the Gaza border in a meeting of his Yisrael Beitenu faction. Liberman’s words were fascinating because they stood in contradiction to his featured position in the Cabinet: The defense minister portrayed himself as pushing for a strong operation in Gaza but as continuously being blocked (by Netanyahu) on that.

Liberman began by saying: “Anyone banking on an agreement with Hamas is seriously mistaken.” Afterward, he justified the protests of the southern residents and explained that the Israeli government had tried “all the available options and possibilities, yet the fact is that after seven months, the residents of Israel’s south have absorbed 43 rockets, 43 Code Red sirens, and it’s clear that this situation cannot continue.” Nevertheless, anyone expecting Liberman to unveil a new action plan was disappointed. “As I said, we must follow another plan of action; there’s no need for a ground operation,” Liberman said. “We have enough means to restore the quiet and calm without a ground operation. Even if we kill all of the 40,000 Hamas and [Palestinian] Islamic Jihad activists, it is not worth losing a single Israeli soldier.”

The big question that the Gaza-envelope residents are probably asking themselves with regard to these statements is: If the defense minister has such effective tools under his sleeve to restore peace and quiet, why hasn’t he used them yet?

If that wasn’t enough, the prime minister was simultaneously meeting with political correspondents and told them that Israel is taking action to prevent entry and inroads into its territory and avert harm to soldiers and localities. Netanyahu also said that Israel is acting to prevent a humanitarian disaster in Gaza and thus is willing to accept mediation efforts of the UN and of Egypt for regularizing the Strip’s electrical supply and achieving peace and quiet. Statements of these kinds have also been heard from others around Netanyahu. A senior political source was quoted as saying that Netanyahu wants to exhaust all possible efforts to bring back peace and quiet to the Strip and is not interested in another war. According to the source, the scenario preferred by Netanyahu includes inflicting serious blows on Gaza (but without occupying the Strip) in order to achieve long-term quiet. The source also noted that the prime minister is aware that should he give the go-ahead for a military operation, everyone will applaud him … for the first two hours. Afterward, public opinion will change in the opposite direction.

In other words, Netanyahu, as opposed to Liberman, believes in the arrangement with Hamas option, but when this does not materialize, it emerges that neither of the two leaders has an action plan. In addition, neither wants a military operation in Gaza.

Netanyahu is the one with direct responsibility for the Gaza conundrum and the fact that Israel has no clear policy. Nevertheless, Netanyahu continues to preserve his image in public opinion polls as Mr. Security. This is in spite of the fact that he has served as Israel’s prime minister over the last decade, in which the Gaza problem has not been solved, but only worsened.