Are Gaza rockets a first taste of next Israel-Hamas war?

The rocket that hit a home in Beersheba on Oct. 17 made it clear that if Israel carries out threats for a war against Gaza, the price will be very steep. 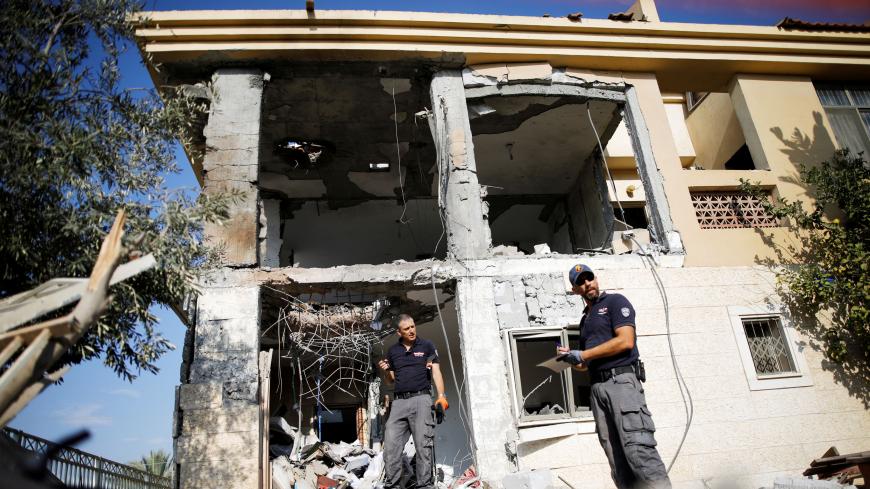 Israeli combat engineers work on a house the military said was hit by a rocket fired from the Gaza Strip, in Beersheba, southern Israel, Oct. 17, 2018. - REUTERS/Amir Cohen

Anyone seeking to understand the latest flare-up between Gaza and Israel must keep in mind two self-evident facts. The first is that there is no way whatsoever that Hamas was not involved in the firing of two Grad rockets from Gaza into Israel this week. The second is that Hamas and Israel are not interested in going to war at this time and each is adopting a posture of “grab me before I go crazy and punch out the other guy’s lights.”

On the night of Oct. 16-17, two 122 mm Grad rockets were fired from Gaza — one toward a central Israeli city (Israeli authorities did not disclose the exact location), the other toward the southern town of Beersheba. The first landed in the sea, the second hit a house. By dint of a mother’s resourcefulness in rushing her three children into a shelter, no one was hurt.

Knowing that Israel would react with force to the attack, both Hamas and the Islamic Jihad denied responsibility for the rockets. “The resistance wings in the joint command center salute Egyptian efforts to achieve our people’s demands and reject all irresponsible attempts that seek to distort and destroy the Egyptian [truce] efforts, including the firing of rockets last night,” according to their joint statement. “Nonetheless, we underscore our readiness to act against any aggression.”

No organization operating in the Gaza Strip other than Hamas and the Islamic Jihad has such long-range Grad rockets in its arsenal. An Israeli defense source noted Hamas’ state of alert, given recent threats by Defense Minister Avigdor Liberman and Prime Minister Benjamin Netanyahu to retaliate against the ongoing Gaza border violence. The source told Al-Monitor that in such a situation, and under the watchful eyes of Hamas, no rogue group could have set up the rocket launcher, fire off two rockets and disappear. So why did Hamas launch the rockets and immediately apologize and disavow responsibility for them?

The Hamas leadership has heard the threats emanating from Israel over the past week loud and clear. On Oct. 16, prior to the rocket attack, Liberman told reporters during a visit to the Gaza Division, "We are not willing to accept the level of violence we see one week after another. … A serious blow to Hamas could bring us at least five more years of quiet.” Liberman said he had concluded that only a harsh strike on Gaza would restore the calm that prevailed on the border before Hamas launched a series of mass protests March 29. Netanyahu, who is generally more circumspect than his defense minister, took a hard line at the start of the Oct. 14 weekly government meeting, saying, “We are very close to a different kind of activity in Gaza”.

Alongside the series of high-level warnings, Israeli media reported that the defense cabinet was about to convene in emergency session Oct. 17 to make decisions on Gaza. The rockets were fired just hours before the scheduled meeting.

Neither the Hamas political leaders in Gaza, Hamas Gaza leader Yahya Sinwar, and Chief of Hamas Political Bureau Ismail Haniyeh, nor representatives of the armed wing of Hamas responded to the drums of war from Israel and did not react with worded threats of their own. They obviously realized that militant rhetoric on their part could truly land them in a war they do not want. Close to 2,200 Palestinians were killed in Gaza and tens of thousands wounded in the summer 2014 war with Israel that was code-named Operation Protective Edge. Another war would be just as bloody. Nonetheless, none of the Hamas leaders would consider calling a halt to the Palestinian protests along the border with Israel that have drawn international attention to the plight of the Strip’s 2 million residents under an Israeli siege for the past 11 years. Hamas believes that stopping the demonstrations and halting the launching of incendiary kites and balloons that have been setting fires to a large number of Israeli fields would signal a continuation of the status quo and preclude any prospects of forcing Israel to lift its siege.

Hamas meant the two rockets as “tie breakers,” signaling to Israel the consequences of a decision to carry out its threat of a “different kind of activity” against Gaza. Hamas, for its part, has changed the rules of the game that was confined until now to the border area and the firing of short-range rockets into Israeli border communities. It was a kind of gamble aimed at preventing another war in Gaza, and it worked. The response of the Israel Defense Forces (IDF) was measured and restrained, far more so than its retaliation for a mortar attack in July described as the most comprehensive and powerful since Operation Protective Edge.

Despite the militant tone of its leadership, Israel is not interested in an all-out war with Gaza. Certainly not now. A war at this time with thousands of fatalities would once again expose Israel to sharp global condemnation, threats of lawsuits over harm to civilians and complaints to the International Criminal Court in The Hague. It also holds the potential of stirring up a Palestinian uprising in the West Bank, where tensions are already high.

That was why Israel accepted the Hamas disavowal of the rocket attacks. Both sides are far more comfortable with maintaining ambiguity regarding those responsible for the rockets and blaming a “rogue organization” seeking “to entangle” Hamas in an undesirable war. Had Israeli officials had claimed otherwise, in other words, if they had claimed that Hamas and Islamic Jihad had carried out the attack, Israel could not have opted for a measured response. With blame placed squarely on the two Gaza groups, the defense cabinet would have come under heavy public pressure to instruct the IDF to carry out the threats issued by the prime minister and defense minister and land a debilitating blow on the Strip.

In the evening hours of Oct. 17, Palestinian sources reported that an Egyptian-mediated cease-fire had been reached with Israel. As usual, Israel did not confirm the report, but on Oct. 18, authorities announced that life in the Israeli communities adjacent to Gaza was back to normal.

When the defense cabinet convened in the evening of Oct. 17, Hamas warned, “If Israel attacks in Gaza, we will react at once.” The ensuing night hours were calm. Hamas had gotten its way, the message was received, and the warnings by Netanyahu and Liberman pouring fuel onto the already simmering fire turned out to be empty threats. They were designed to allow the two leaders to shirk responsibility for the justified criticism that they do not have a true solution, neither a diplomatic nor a military one, for the protracted Gaza crisis.