Hamas political and military branches disagree on whether the group should pursue an Egypt-mediated arrangement with Israel, or keep up the violent demonstrations near the border fence. 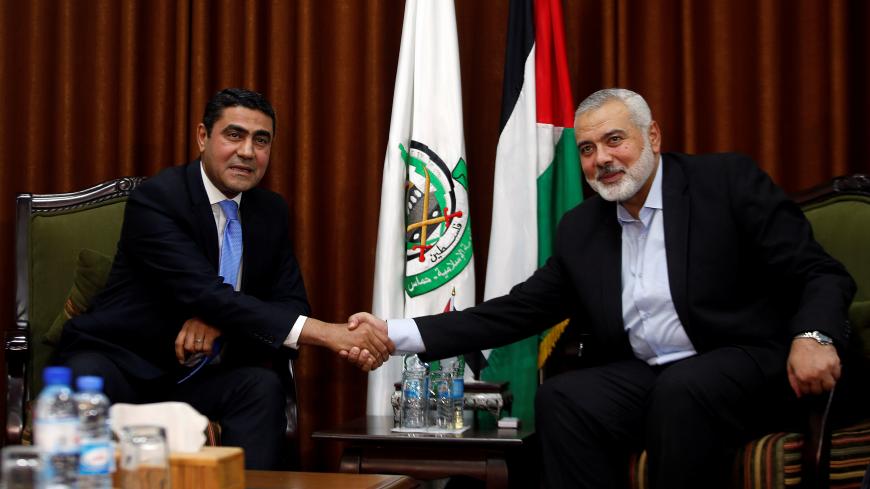 Prime Minister Benjamin Netanyahu summed up succinctly this week Israel’s dilemma vis-a-vis Hamas: War or truce? “We are working to prevent [Gaza] forces getting into Israel to harm our soldiers and communities,” Netanyahu told reporters Oct. 29. “But for there to be calm, the problem that could lead to humanitarian collapse (in Gaza) must be resolved.”

There is no certainty that either of these options will resolve the problem, but Netanyahu seems intent on exhausting all other avenues before deciding on an extensive military operation in Gaza. That same day, an Israeli political source confirmed that Israel and Hamas had been on the verge of a limited cease-fire deal, as reported earlier by Al-Monitor, but the escalation of Palestinian border protests Oct. 26 and the massive rocket fire later that night scuttled the understandings.

For now, Netanyahu is busy deflecting right-wing pressure from his top ministers, such as Defense Minister Avigdor Liberman, to deliver “the hardest blow we can’’ (against Hamas) and to conquer Gaza. A political source was quoted as saying Oct. 29 that even if Israel were to conquer Gaza and replace Hamas, “There are no volunteers to take Gaza off our hands.” Israel, obviously, does not want to be saddled with taking care of 2 million Palestinians and dealing at the same time with terrorism and resistance.

This raises the question of whether a cease-fire arrangement with Hamas — whether limited or broad — is achievable. There is no guarantee. As mentioned above, a few days ago, Hamas and Israel were on the verge of understandings over a limited deal that would allow Hamas to keep holding protests along the border with Israel but would prevent Palestinian attempts to infiltrate into Israel and to attack Israeli soldiers. At the same time, Israel and Egypt would ease their blockade of the Strip. Then the border protests escalated and the Islamic Jihad fired dozens of rockets at Israel, even brazenly admitting responsibility for the rocket barrages, which it has rarely done in the past.

At the same time, Hamas issued an ultimatum, conveyed through Egypt. Hamas Gaza leader Yahya Sinwar warned that unless Israel allows the monthly transfer of $15 million in cash for payment of salaries to Hamas officials, the organization would escalate its violence against Israel. Netanyahu obviously rejected the threat, saying at the start of the weekly Cabinet meeting Oct, 28: “There is no way Israel will accept this offer. We will continue to act only according to Israel's interest and for the sake of Israel's security."

So what went wrong with the understandings reached with Hamas? Al-Monitor has learned that the military and political wings of Hamas are locked in a seemingly intractable conflict. While the political wing wants Hamas to accept Egypt’s proposals for a deal with Israel, the armed wing favors continued armed struggle — with violent border protests, the use of incendiary kites and balloons and the firing of rockets, believing this will force Israel into making far greater concessions. Some factions within the military wing believe Israel is on the verge of caving in and lifting the siege it imposed over 11 years ago, while any cease-fire deal reached at this point would perpetuate the blockade. These groups also feel that easing some restrictions without lifting the siege would not make a significant difference in the humanitarian-economic crisis in the enclave, and would certainly not improve Hamas’ prospects of continuing to rule Gaza.

Sinwar, who issued Israel with the ultimatum on the transfer of $15 million for salaries for political and military officials, actually supports a deal with Israel and has said so publicly.

A political source within Hamas told Al-Monitor on condition of anonymity that Sinwar is in a bind. He is under tremendous pressure by the military wing and the hawkish faction within Hamas led by, among others, Dr. Mahmoud al-Zahar, to keep up the struggle with Israel along the border fence until it caves. In order to deflect the pressure and bring around opponents to a cease-fire deal, Sinwar has promised to exhaust all negotiation options, including the demand for money to pay Hamas employees.

Sinwar and Netanyahu find themselves in a similar plight, both having to fend off heavy pressure to opt for violence while they would rather exhaust all options and reach an agreement with the other side. Netanyahu’s Oct. 29 briefing of reporters did not stem from a need to update the public about the problem with Gaza, but to ease the pressure from his top ministers and to make clear that the “magic bullets” being proposed by Liberman, hawkish Education Minister Naftali Bennett and others are not realistic.

Sinwar, on the other hand, changed the rules of the game Oct. 26 when he ratcheted up the intensity of the border protests against Israel and issued threats against it in an attempt to show his opponents that he can wring concessions out of Israel without giving in. Another Hamas political source tells Al-Monitor that the military wing opposes a political solution to the standoff with Israel, certainly one that does not hand Gazans the prize of lifting the siege.

The leaders of the military wing have thus far managed to torpedo all attempts to reach a Hamas-Israel agreement. On Oct. 17, for example, two Grad rockets were fired into Israel and one scored a direct hit on a house in the city of Beersheba. The armed wing of the Islamic Jihad carried out the attack with the approval, tacit or otherwise, of Hamas. As aforementioned, the Islamic Jihad openly accepted responsibility for the Oct. 26 rocket attacks on Israel, which it carried out with the approval of the Hamas military wing, perhaps even under its orders.

It appears that Netanyahu’s desire to avert another war with Hamas notwithstanding, a cease-fire deal is not guaranteed. Too many factions within Hamas have an interest in scuttling it.