Why Israel aims for arrangement with Hamas

According to publications, Israel and Hamas have reached an inclusive agreement for easing the Gaza blockade and restraining border violence. 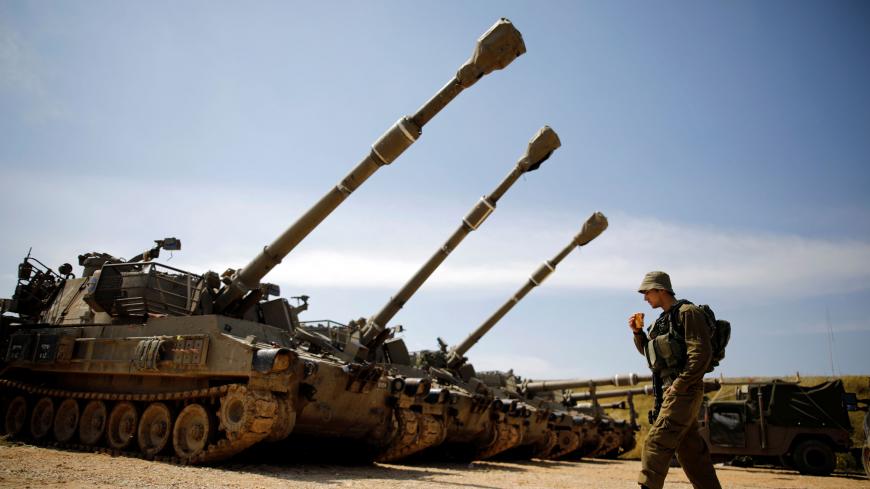 An Israeli soldier walks next to a battery of cannons near the border with the Gaza Strip, in southern Israel, March 28, 2019. - REUTERS/Amir Cohen

Officially, Israel denies — or rather declines to confirm — reaching an agreement with Hamas last week.

Indeed, the issue was not brought to the security Cabinet. New Right leader Naftali Bennett and his party colleague Justice Minister Ayelet Shaked have been running an election campaign headlined “Bennett will defeat Hamas," calling for a harsh stance against the Gaza Strip escalating violence and criticizing Prime Minister Benjamin Netanyahu’s policy on Hamas. But on April 1, Shaked conceded in an interview on Channel 13, “I have no idea whether there is an agreement with Hamas, I have not been updated.” Earlier, Shaked and Bennett had urged Prime Minister Benjamin Netanyahu to convene the security Cabinet to discuss the reportedly emerging deal, saying they would vote against “Israel’s surrender to Hamas,” as Bennett described it.

That's the crux of the issue. An agreement with Hamas, whether concluded or signed, means that Israel has recognized the group de facto and no longer views it as a terror organization. That's probably why Netanyahu has avoided convening his Cabinet. However, what occurred March 30 along the Gaza border — with Hamas curbing violence against Israel — was obviously the result of understandings between the sides, a type of ad hoc Israel-Hamas arrangement mediated by Egypt on the way to a broader compact.

Israel and Hamas are not discussing a cease-fire or a prisoner swap, as states sometimes do with terror organizations. The United States, for example, made a deal with the Taliban for the 2014 release of captured soldier Robert Bergdahl without removing it from the list of terror-supporting organizations. Such was also the case with American journalist Peter Theo Curtis freed from captivity in Syria the same year by the jihadist group Jabhat al-Nusra, which the United States continues to view essentially as a terror organization.

Israel has reached numerous understandings on cease-fires with Hamas after every flare-up of violence in recent years. In 2011, with Egyptian mediation, the two sides even signed an agreement on the exchange of some 1,000 Palestinians jailed in Israel in return for Gilad Shalit, the Israeli soldier held by Hamas for five years. Despite these agreements and indirect meetings in Cairo, Israel continued to view Hamas as a terror organization. In issuing statements after every Israeli retaliatory bombing in Gaza, the chief military spokesperson would report “attacks on terror targets and infrastructure of the terror organization Hamas.”

Last week’s agreement that prevented yet another round of violence is not simply one more cease-fire arrangement designed to stop violent Palestinian demonstrations along Israel’s border and the launch of rockets and explosive balloons. One could define it as a diplomatic accord between Israel and Hamas. According to the understandings between the sides, Israel has committed to significant easing of various restrictions on Gaza if Hamas dials back the anti-Israel violence. The Ynet news website reported March 28 that Israel’s proposals included more supply trucks allowed to enter Gaza through the Kerem Shalom border crossing and expansion of Gaza’s fishing zone to 12 nautical miles, which was actually extended to 15 miles. The offer also included expanding the United Nations temporary employment project to include 40,000 Gazans, upgrading the power line from Israel to the Gaza Strip, easing of import and export permits, and allowing the entry into Gaza of dual-use items that Israel had banned until now.

On March 30, after the mass Palestinian protest along the border went off relatively smoothly, the Israel Defense Forces issued the following statement, which translated from Hebrew reads: “The events of the so-called March of One Million on the Gaza Strip border have ended with less violence than expected. The organization controlling Gaza acted with restraint, which we have not seen for the past year.”

It is important to note that the statement referred to the “organization controlling Gaza” rather than the usual term of “terror organization Hamas.”

The following morning, Israel reopened the crossings, despite the five rockets fired overnight toward its border communities. On April 1, the Coordinator of Government Activities in the Territories (COGAT) announced that Gaza’s fishing zone was extended to 15 nautical miles, a range that Israel had not allowed since its 1993 Oslo Accord with the Palestinians. COGAT later issued a strange explanation: "This is part of our policy, which distinguishes between terrorism and the general population …” This explanation seems strange as the agreement to extend the fishing zone was obviously reached vis-a-vis Hamas, and not vis-a-vis the fishermen (i.e., "the general population").

Hamas on the other hand, has no qualms about using the word “agreement,” as deputy head of the Hamas political department Salah al-Arouri explained March 30. “We expect agreements to be signed within a few days,” he said. Obviously aware of the significance of an agreement with the enemy that Hamas refuses to recognize, Arouri added, "This is not a peace agreement with Israel and has no connection to diplomacy. We are interested in ceasing the fighting in exchange for [Israel] lifting the siege."

“The agreement reached with Israel is just the beginning,” a Hamas source told Al-Monitor on condition of anonymity. The leadership, he added, understands that the Israeli government is under pressure due to the April 9 elections. It had, however, received an explicit promise of accelerated and intensive negotiations soon on lifting the blockade of Gaza and discussion of all issues Hamas had raised in the past, including the building of sea and airports and establishment of commercial-economic zones.

Asked by Al-Monitor whether the agreement, which includes a Hamas commitment to cease all armed action or violent popular activity against Israel, means it had given up jihad and was recognizing Israel’s existence, the source answered, “The Hamas leadership has said repeatedly, ‘We do not recognize Israel as long as we have not been given our rights.’”

Nonetheless, his words are clear. Agreement with Israel based on a cessation of armed activity in return for economic concessions is de facto recognition by each side of the other’s existence. Hamas will probably keep dubbing Israel “the Zionist enemy,” but it is far from certain that Israel will be able to keep calling Hamas “a terror organization.” It will probably adopt the term minted in recent days by the military spokesperson, “the organization controlling Gaza.”

Even as Israel engages in agreements and understandings with Hamas, Netanyahu treats his security cooperation partner in the West Bank as a terror organization. Ever since the breakdown of the US-mediated Israeli-Palestinian peace talks in April 2014, no significant agreement has been reached with Palestinian President Mahmoud Abbas. Netanyahu and his ministers keep treating the Palestinian Authority (PA) as a “terror entity” despite the close and beneficial security coordination between the sides. The only agreement reached so far has been on settling the PA’s debt to the Israel Electric Corporation, at the instigation of Finance Minister Moshe Kahlon.

Netanyahu insists at every opportunity that Abbas supports terrorism and incites his people to terrorist activity. His divide and conquer method, in regard to Gaza and the West Bank, is designed to enable Israel to evade any deal with the PA, which would by its very nature entail territorial and diplomatic concessions that Netanyahu cannot or does not want to deliver. Netanyahu finds it far simpler to reach agreement with Hamas and whitewash the sins of the group that Israel has for years referred to in disgust as “the Hamas terror organization.”