Are Israel, Hamas en route to war or an agreement?

Hamas' leadership seems unaware of or simply does not care that its actions to defend what it views as the honor of the movement threaten a pending cease-fire deal with Israel and make a full-blown humanitarian crisis in Gaza more likely. 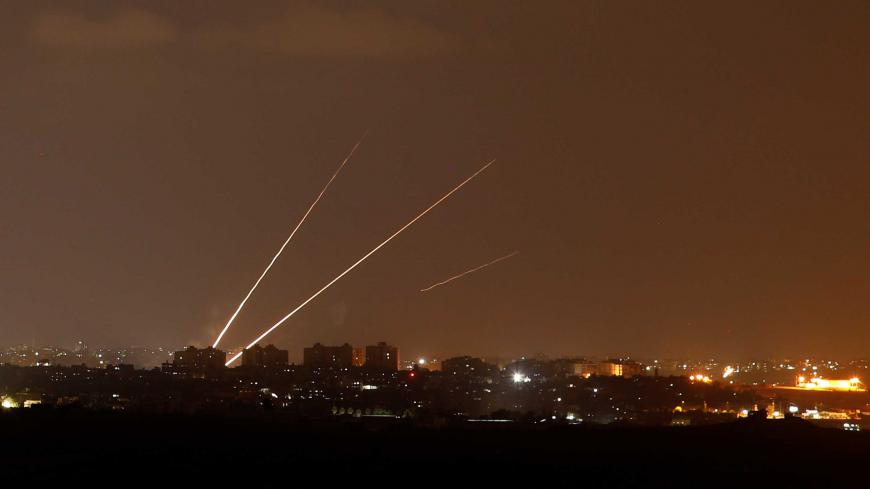 On Aug. 9, Israel’s Security Cabinet was scheduled to convene for a crucial session on a long-term cease-fire deal with Hamas. Instead of debating what the Israelis dub “regulation” with Hamas, however, Cabinet members talked about responding to the firing of more than 150 rockets by Hamas from Gaza that began the evening of Aug. 8. That barrage into southern Israeli communities resulted in civilian injuries. On the morning of Aug. 9, rockets were also fired at the coastal town of Ashkelon.

Since Hamas took control of Gaza 11 years ago, Israel has not faced such an extreme paradox, with the heads of all its defense forces and the political echelon wavering between approval of a peace deal or war.

The latest escalation on Israel’s southern border came after an Israeli tank shelled a Hamas position in Gaza on Aug. 7, killing two members of its military wing. A spokesman for the Israel Defense Forces (IDF) explained that the shooting had stemmed from a mistake: Israel had thought that the militia was poised for attack when it fact it was showing off its firepower at a ceremony for movement leaders.

One of the guests at the ceremony appears to have been Saleh al-Arouri, deputy head of Hamas' political wing, who had arrived in Gaza to discuss the possible Israeli deal with local leaders. He traveled to Gaza after receiving a promise via Egypt that the Israelis would not try to assassinate him.

The outbreak of violence is threatening to undermine the understandings reached between the two sides in recent weeks through Egyptian and UN mediation. After the Aug. 7 incident but prior to the rocket barrages the following day, senior Israeli defense officials had relayed a conciliatory message, almost an apology, to Hamas for the tank shelling. Briefing reporters, the IDF spokesman appeared to be sending a message to the movement, saying that had the army known in advance of the ceremonial event, IDF force commanders would not have approved the shelling.

The message was passed on, but the heads of Hamas' military wing could not ignore the killing of two of their men, even at the cost of derailing an agreement that seemed headed for an early signing in Cairo and would save Gaza from a major humanitarian crisis. Senior Hamas officials were up front about the military wing’s intent to avenge the deaths of its fighters. In other words, they rejected the Israeli explanation-cum-apology.

Several hours before Hamas let loose the first rockets, Khalil al-Hayya, deputy to Hamas' Gaza chief, Yahya Sinwar, had said, “The resistance will respond to the crime.” He added that Hamas and other Palestinian factions would not allow Israel to change the ground rules that call for a Palestinian response to every Israeli attack. Once Arouri was out of harm’s way, having departed Gaza through the Rafah crossing into Egypt and from there onward to his current home in Beirut, the rockets began to fly.

The leaders of the military wing, determined to prevent Israel from changing the “rules of the game,” did not care that heavy barrages into the Israeli south only three weeks after the third cease-fire in two months entered into force could torpedo the understanding already reached on the way to a hoped-for deal. Their quest for honor and desire to maintain a deterrent balance vis-a-vis Israel appear to be more important in their view than an agreement that could result in a significant easing of the Israeli siege on the enclave and guarantee Hamas' rule for years to come. Sinwar had admitted in December 2017 that Hamas is unable to administer daily life in Gaza, thus his rhetoric remains just that.

The desire of the senior Hamas military leadership to prove its deterrent power is familiar. It reappears during each armed clash with Israel. “Sumud” (“honor of the movement” or "steadfastness," its determined stance) and “bila tanazul” (“without surrender”) are also recurring themes in the leadership’s speeches, reflecting the thinking embedded in Hamas' DNA.

The explanation for this attitude could lie in Hamas' founding as an underground movement, always in the shadow of the far bigger Fatah, and its being infused with the belief that they are messengers of Allah on a quest to save Palestine from the Zionists. Conduct that does not recognize the effect of the movement’s limited power in Gaza, however, including its inability to ensure the welfare of its 2 million residents, reflects the arrogance of its political and military leadership.

Hamas' leaders are driven by their desire to prove to their rivals in Fatah, to Israel and to the Palestinian people that they are better, stronger and more stubborn and willing to sacrifice more to achieve victory and until victory. They are thus willing to abandon what is virtually the only lifeline extended to them, by the Egyptians, if only to show what they view as the determined stand of the resistance to the Zionists.

There is no telling when a cease-fire will enter into force or whether discussions of a deal with Hamas will resume. On Aug. 8, after the top-level Hamas delegation left Gaza, it seemed that only one issue remained to be resolved regarding a deal: the timing of the return of two bodies of the Israeli soldiers Oron Shaul and Hadar Goldin (killed in Operation Protective Edge, in 2014) and the release of several Israeli civilians believed to be held by Hamas.

Hamas has insisted that the handover take place down the road, after Israel and Egypt prove that they are keeping their promise to gradually lift the siege of Gaza. Israel appears to have accepted this condition. A Hamas source told Al-Monitor prior to the current escalation that Israel had also promised that during the second phase of the deal, and even before the return of the remains and the captives, it would release dozens of Palestinians freed in 2011 from Israeli jails and subsequently re-arrested prior to the war in summer 2014.

As mentioned, the Israeli Security Cabinet was ready on Aug. 9 to talk about wrapping up the final details. Now, however, Prime Minister Benjamin Netanyahu is unlikely to win public approval for any deal with Hamas. Calls in Israel to kill Hamas' leadership and remove the organization from power will drown out the warnings by security officials of an impending humanitarian crisis in Gaza and their urging the politicians to go for an agreement.

The latest flare-up begs the question of whether a planned five-year agreement would even last. Given the way Hamas' leaders are behaving — displaying such poor understanding of the crisis they and their people face — even if an agreement is eventually signed, it might not be worth the paper on which it is inked.