The latest Egypt-mediated cease-fire that follows the most recent flare-up of hostilities between Palestinian resistance factions in Gaza and Israel has sparked celebrations in the streets of the Gaza Strip and anger in Israel. 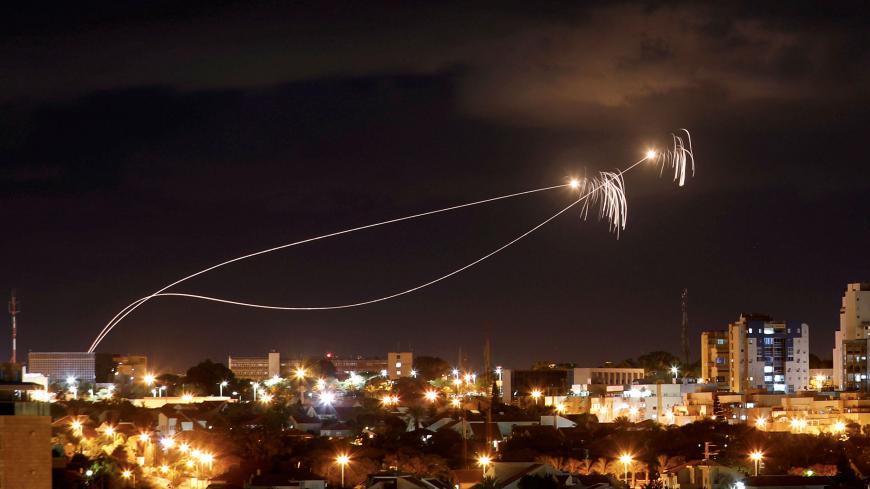 The Iron Dome anti-missile system fires interception missiles as rockets are launched from the Gaza Strip toward Israel, as seen in a long exposure photograph taken in the city of Ashkelon, Israel, Oct. 27, 2018. - REUTERS/Amir Cohen

GAZA CITY, Gaza Strip — The Coordinator of Government Activities in the Territories, Maj. Gen. Kamil Abu Rukun, warned Palestinians in the Gaza Strip of harsh retaliation and zero tolerance in response to any hostilities against Israel during Palestinian protests set for Friday Nov. 16 on the eastern border. Abu Rukun addressed Palestinians in an Arabic-language video on his Facebook page on Nov. 15.

On Nov. 16, thousands of Palestinian protesters headed to the eastern border of the Gaza Strip as part of the marches of return protests that started March 30 and are aimed at breaking the Israeli siege imposed on Gaza since 2007. Forty protesters sustained injuries by Israeli army fire; no casualties were reported.

The latest protest follows the most violent military confrontation on Nov. 11-13 between Palestinian resistance factions in the Gaza Strip and Israel since the 2014 war. An Egyptian-brokered cease-fire on the evening of Nov. 13 set off celebrations in Gaza. Meanwhile, anger prevailed in the Israeli towns of Sderot and Ashkelon near the Israel-Gaza border. On Nov. 15, more than 2,000 Israelis protested in Tel Aviv against the agreement, saying that Prime Minister Benjamin Netanyahu was “weak against Hamas.”

In a statement published Nov. 14, the website of Izz ad-Din al-Qassam Brigades said that in the 40-hour confrontation “the resistance fired about 400 rockets and mortar shells” toward Israel.

A day earlier, Israeli online newspaper The Jerusalem Post quoted the Israeli army as asserting that the army had attacked 160 Hamas and Islamic Jihad targets across the Gaza Strip. Palestinian media reported that the Israeli shelling caused severe and partial damage to 880 housing units in Gaza, including 80 units that were completely destroyed.

Voicing his refusal of the cease-fire, Israeli Defense Minister Avigdor Liberman announced his resignation Nov. 14. In a Facebook post on the same day, Knesset opposition leader Tzipi Livni lashed out at the Israeli Cabinet describing the cease-fire as a security failure and a fatal blow to Israel’s deterrence.

In response to Abu Rukun’s threats, Hamas leader Ismail Radwan told Al-Monitor, “These threats will not frighten us. The return marches will continue until the siege is lifted.”

He said that the resignation of Liberman, who had vowed to assassinate Hamas leader Ismail Haniyeh, is the most significant evidence of Israel's defeat by the resistance. Radwan clarified that the resistance adopted a new strategy of rapid heavy shelling of the Israeli towns adjacent to the Gaza border, instead of bombing major cities such as Tel Aviv. “This is to prove that the resistance is able to respond to any Israeli aggression against the Palestinians, without being dragged into a new war,” he added.

A senior source in al-Qassam Brigades told Al-Monitor, “The resistance factions agreed during the latest escalation to adopt a new military tactic to deceive the Israeli Iron Dome defense system when firing rockets at Israel. They launched heavy barrages of up to 10 rockets each.”

The source explained that this tactic aims to "exhaust the Iron Dome rocket interceptors’ stockpiles and increase the number of Palestinian rockets that hit Israeli cities and towns.”

Al-Monitor spoke to Khader Habib, a leader of the Islamic Jihad movement. “The destruction and injuries caused by the resistance-fired rockets that fell on Zionist entities destabilized the Israeli deterrent force. [Israeli Prime Minister Benjamin] Netanyahu was forced to surrender to the resistance and opt for calming the situation,” he said. “The resistance is different today from what it was during the 2014 war. It now has a better missile capability that can cause Israel substantial human and material losses.”

Iyad al-Qara, former director general of Felesteen, a local newspaper in Gaza, told Al-Monitor, “The political objective that Hamas sought to achieve through this confrontation was to push Israel toward a truce and improve the living conditions in the Gaza Strip, without Israel imposing complicated conditions such as pulling out the resistance’s weapons in Gaza,” he said. “This confrontation has greatly damaged Israel's deterrent power. The current truce between Gaza and Israel will not last long. The next stage may witness a long-term stabilization of this truce or an extended war by Israel to regain its deterrent power.”

Qara argued that a war or truce depends on the ability of the Egyptian mediator to break through the ongoing truce efforts between the two parties. “This also depends on the acceptance by Israel of the idea of lifting the siege on Gaza as well as on the extent to which Hamas accepts ensuring calm and security in southern Israel.”

Talal Okal, a writer for the Palestinian Al-Ayyam daily, told Al-Monitor, “The Israeli deterrent force was dealt an unprecedented blow during this military escalation. Israel has never sustained such damage in two days of confrontation with the resistance.”

He pointed out that the resistance factions in Gaza believe the destabilization of the Israeli defense system will encourage them to fully engage in future confrontations with Israel. “The resistance factions’ next potential confrontation with Israel will be aimed to fully lift the siege imposed on Gaza or to respond to any Israeli military action,” he said. “Overpowering Israel's deterrent power boosts Hamas' popularity at the expense of that of the Palestinian Authority.”

The director of the International Center for Consultations in Haifa, Wadi Abu Nassar, does not think it was Hamas’ rocket barrage that forced Netanyahu to accept ending the escalation. “Netanyahu rather aims to score a top priority regional political gain,” he told Al-Monitor. “The Gulf has been increasingly opening up toward Israel. Netanyahu paid an official visit to Oman on Oct. 26. On the same day, an Israeli sports delegation headed by Minister of Culture and Sports Miri Regev arrived in the United Arab Emirates. The visit was the first of its kind by an Israeli minister to a Gulf state.”

Abu Nassar explained that Netanyahu does not want at this time to wage an extended war against the Gaza Strip. “He fears this would restrict the Gulf’s openness toward Israel. Israeli Economy Minister Eli Cohen is preparing to visit Bahrain early next year. He had received an official invitation to take part in the Startup Nations Ministerial conference in Manama,” he said.