Has Israel’s defense minister given up on toppling Hamas?

Israeli Defense Minister Avigdor Liberman seems to have realized that attacking Hamas targets in retaliation for rocket fire from rogue groups could damage the organization’s efforts to contain those elements. 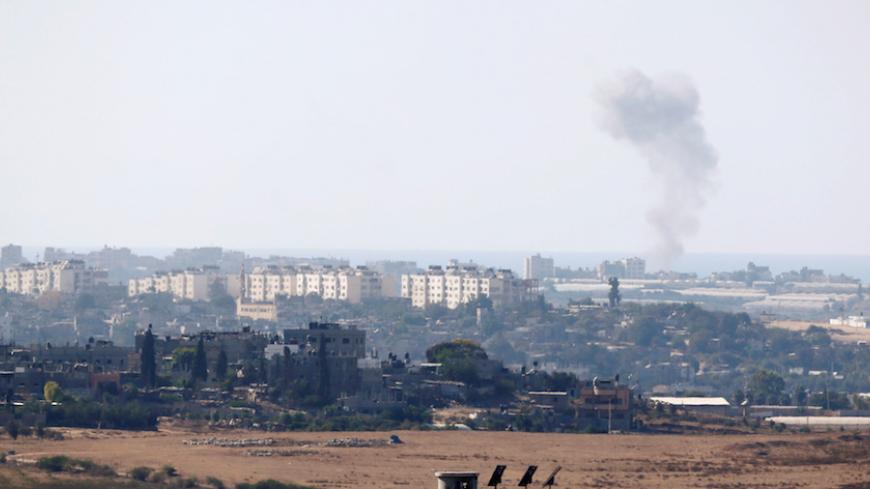 Smoke rises following an Israeli airstrike on the Gaza Strip hours after a rocket launched from the Palestinian enclave hit the Israeli border town of Sderot, as seen from the Israeli side of the border with the Gaza Strip, Oct. 5, 2016. - REUTERS/Amir Cohen

A Qassam rocket fell in the southern Israeli city of Sderot on Oct. 5, just meters from the home of Mayor Alon Davidi. Luckily there was no significant damage and no one was badly hurt, though two victims were treated for shock. The Iron Dome missile defense battery did not launch a missile to intercept the rocket, perhaps because of the short range of the Qassams.

On that same night, the Israel Defense Forces carried out a massive series of aerial attacks, most against specific Hamas targets in the Gaza Strip. The next afternoon, another Qassam rocket was fired from Gaza and landed in open Israeli territory with no human casualties. The tons of explosives fired on Gaza by the Israeli air force over the night between the two rocket attacks had no deterrence effect. Echoes of the IDF assault's explosions rang through the length and breadth of Gaza. Yet in a gesture of defiance, the round ended with that last rocket.

This was the first time since Operation Protective Edge in the summer of 2014 that two Qassam rockets have been fired toward Israel in such a short time. The campaign lowered the number of rocket launches to an all-time low. This peace and quiet was made possible by the new rules instituted between Israel and Hamas since the Protective Edge campaign, and a kind of stable coexistence that took shape between Israel and the terror organization that aspires to destroy it.

These rocket attacks, including the two over the weekend, were not launched by Hamas. On the contrary, Hamas is working hard to prevent such attacks. Instead the rockets came from what are commonly called “rogue organizations” or "recalcitrant groups," mainly Salafi groups or splinter organizations under the influence of the Islamic State. These groups operate on the margins of the Gaza Strip and do not obey Hamas.

A small Salafi group called “Ahfad Sahaba Aknaf Beit al-Maqdis” claimed responsibility for the latest rockets. According to the group, the attack was an act of protest against the arrests of their organization’s activists by Hamas. Israel, for its part, continues to proclaim that it views Hamas as the sovereign power in the Gaza Strip, and so exacts a price from it for each projectile that is fired.

From all this, a strange situation has emerged: Hamas does not fire at Israel, but tries to stop the rocket fire and has even established a special unit tasked with preventing it. Yet it still pays a heavy price after every incident. By contrast, the Salafi groups have two reasons to celebrate: They continue to fire at Israel with impunity, and they also indirectly damage Hamas when they make Israel their whipping boy.

Israel has not found a way to exact a price from the Salafi organizations that nip at the heels of Hamas in Gaza. They are too small and lack fixed infrastructure, bases and military posts. An Israeli intelligence agent who spoke to Al-Monitor not for attribution estimated that each such organization probably has only a few dozen operatives, within a circle of some hundreds of organizational members and supporters. Thus Israel has no choice but to go against its own interests and settle its accounts with the entity it views as Gaza’s only sovereign ruler and stabilizing agent: Hamas. Thus Israel operates to perpetuate the Hamas regime.

Under these circumstances, ephemeral Salafi organizations find themselves in a rare position of influence: Through a not-impossible chain of events, they are (theoretically) capable of dragging Israel and Hamas into a confrontation neither of them really wants. These drizzles of rocket fire, which have slightly increased recently, violate the delicate balance that has held on the ground since Operation Protective Edge. In this balancing act, Israel learned to live with Hamas and vice versa.

In the two years that passed since the Protective Edge campaign, Israel has dramatically improved its intelligence-collection abilities both above and below the ground (regarding the digging of Hamas attack tunnels) in the Gaza Strip. Over the past year, a new Israeli modus operandi has emerged regarding its responses to the firing of rockets from the Gaza Strip. The previous time a Qassam was fired on Israel (Aug. 21), the Israeli retaliation was unusually powerful: Its air force targeted a series of strategic Hamas targets in Gaza. According to a high-level IDF officer who spoke on condition of anonymity, the move “inflicted severe damage” on some of the organization’s “important strategic abilities.” Another round of retaliation along these lines took place in the past week.

Military censorship does not permit the dissemination of details regarding what, exactly, the IDF attacked in the Beit Hanoun region in the Gaza Strip. However, we do know that the air force dropped a large number of massive bombs on a certain site that is of strategic importance to Hamas. At the conclusion of this assault, Israel lost an F-16 aircraft that was unable to land at its Negev base and one of its pilots was killed.

At the end of the current round of aggression, Israel was the one to blink first, and its response to the second rocket was minimal. The still-new defense minister, Avigdor Liberman (appointed at the end of May), delivered a speech on the night of Oct. 6 at an IDF graduation ceremony. His message to Hamas was mixed, but mainly conciliatory: “We are not looking for excitement and no one is pushing for escalation with Hamas in the Gaza Strip, but we will persist in the defense and safety of Israeli citizens and on that point there will be no compromise.” So, according to Liberman, “Hamas is the one that rules the Gaza Strip. … When it tries to achieve or prevent something, it knows how to do it. So, with regard to rogue elements, they should try harder.”

Only a few months ago, that same Liberman would have reacted more harshly after each rocket and demanded that the IDF pull out all the stops and act immediately: invade Gaza, conquer it and bring down the Hamas regime. The change in the new Israeli defense minister is dramatic and has been covered in the press. But Liberman’s prudent, reasonable statement, designed to end the limited round of violence as soon as possible, clearly demonstrates one fact more than anything else: Yes, Liberman has come to recognize the limitations of power.