Defense Minister Avigdor Liberman's carrot-and-stick plan for the West Bank and strong retaliation against Gaza rocket fire reflect an effort to set himself apart from his predecessor, Moshe Ya'alon. 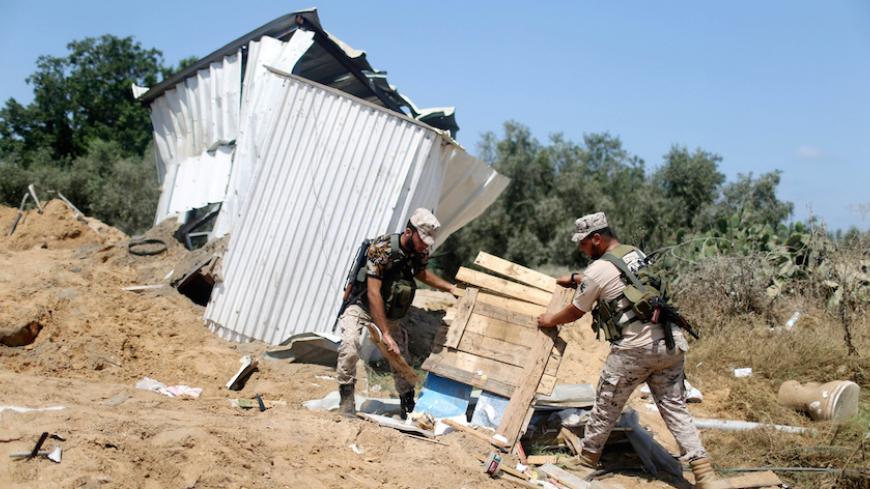 Members of Palestinian security forces loyal to Hamas survey a Hamas site after it was hit by an Israeli airstrike in the northern Gaza Strip, Aug. 22, 2016. - REUTERS/Ibraheem Abu Mustafa

A Qassam rocket fired from the Gaza Strip on Aug. 21 exploded in downtown Sderot, in southern Israel. Fortunately, no one was hurt, but the explosion caused significant damage to a building. The rocket interrupted the relatively long-standing quiet in Sderot and other localities surrounding the Gaza Strip and interfered with preparations for a major music festival that opened that same evening. Since Operation Protective Edge in the summer of 2014, rocket fire from Gaza has declined considerably. Nevertheless, Qassam rockets have occasionally been fired, mainly, in the words of the Israel Defense Forces (IDF), by “recalcitrant” groups that have sprouted up in Gaza beneath Hamas’ radar.

Israel was quick to respond the same afternoon. A tank fired a shell or two at Hamas targets in Beit Hanoun, and an Israeli drone flying over Gaza at the time responded with symbolic fire against a few targets. To that point, everything was a matter of routine. The Israeli response followed the rules of the game eked out in blood and fire over the past two years: If a single rocket, or a few rockets, is fired from Gaza, Israel will respond by firing back immediately, and quiet is restored in a matter of hours.

Later on the night of Aug. 21, however, something unusual happened. The Israeli air force launched a wide-scale attack against some 50 Hamas targets throughout Gaza. The explosions resonated for several hours in Gaza and on the Israeli side of the border. The attack, based on high-quality intelligence, was focused and enduring. Intended to deliver a significant blow to Hamas’ capacity to gather intelligence, it came as a real surprise to the Hamas leadership in Gaza, which had grown used to the long-standing situation in which Israel responded by returning symbolic fire. The question is, what lay behind Israel’s unusual response to this particular attack?

Avigdor Liberman was behind it. The recently appointed defense minister is trying to redefine himself. A few days earlier, on Aug. 17, he had presented his “carrot and stick” plan as a new policy toward the Palestinians on the West Bank. He is well aware of the vast difference between his statements as an antagonistic, aggressive and relentless member of the opposition before his appointment as defense minister at the end of May and his moderate and measured activities after taking over the post. In this regard, over the past few weeks, the Israeli media and satirists had made mincemeat of Liberman.

The threats he had made before joining the coalition were broadcast repeatedly, including his declaration that he would kill Ismail Haniyeh, the Hamas prime minister, within 48 hours if the bodies of missing IDF soldiers were not returned to Israel when demanded and his position in support of the soldier who shot a wounded Palestinian assailant in Hebron in March. These had all been preserved in formaldehyde as soon as Liberman fulfilled his life’s ambition of becoming defense minister. The madman disappeared. The calculating and cunning politician was back.

Liberman is trying to rectify all this. Israel’s uncustomary response in Gaza sends a strong signal to the Palestinians that the rules of the game have changed. Israel will no longer hold back against a “trickle” of rocket fire. Hamas is in full control of Gaza and therefore fully responsible for what happens there. Israel has no interest in the problems posed by unruly groups or various Salafi organizations. If Hamas fails to enforce a state of calm, Israel will respond with force.

It is still unclear what, if anything, the Palestinian response to Israel’s widespread attack will be. One day before the incident, Hamas had used a parade in Gaza to showcase new rockets that it had manufactured and boasted that it had constructed a military prison identical to Israeli military prisons in which it one day plans to hold Israeli captives. It is quite possible that this aggressive rhetoric played on Liberman’s sensitive nerves as he tried to maintain his bellicose positions without paying a price for them in the political, diplomatic and international arenas.

Liberman had offered the carrot-and-stick approach to distinguish his policies from those of his predecessor, Moshe Ya’alon. The program is the result of a serious argument between Liberman and IDF heads, including Chief of Staff Gadi Eizenkot, who has been forced on more than one occasion to hold back in response to frenetic moves originating at the political level above him. That is what happened when the Defense Ministry released its bizarre response, unsigned by the minister, to President Barack Obama’s Aug. 5 remarks alluding to Israeli officials acknowledging positive aspects of the Iran nuclear agreement. It was also the case when Liberman demanded that Israel tighten its control over Judea and Samaria and take a firmer stand against Palestinians involved in terrorism. Eizenkot represents a different approach, which advocates restoring calm, containing violence and conducting surgical measures in response to Palestinians involved in violence.

As part of Liberman’s plan, the territory of the West Bank is to be designated “red” and “green.” Cities, towns and villages from which no residents commit acts of terror against Israel will be colored “green” and receive various benefits, an easing of restrictions, more economic development (such as inclusion in an economic corridor connecting the Palestinian town of Jericho to Jordan), permits to construct industrial zones and other incentives. Regions that are home to Palestinians who commit terrorist attacks will be designated red, and the IDF will impose more restrictions on them, including closures, sieges, denial of permits to work in Israel and so on.

Liberman's most surprising announcement about the plan was his stated intention to establish alternative channels of communication between Israel and the Palestinians to circumvent the Palestinian Authority, especially President Mahmoud Abbas. Liberman regards Abbas as a strategic rival and believes that Israel must do everything it can to replace him. Liberman did not go into detail about the kind of contacts he intends to promote. In fact, his activities along these lines over the past few years have been murky.

At the same time, however, it is obvious that Liberman has a string of potential partners on the other side, apart from former senior Fatah leader Mohammed Dahlan, identified in the past. Whenever someone tries to draw Liberman’s attention to Israel’s previous failed efforts to establish an alternative Palestinian leadership, he walks away unimpressed. Israel never managed to succeed in this endeavor, and the country always came to long for Palestinian leaders of the past, even if it expressed revulsion toward them at the time.

As far as Liberman is concerned, history need not repeat itself. That Abbas continues to maintain close cooperation with Israel on security matters and helps in the war against terror doesn’t affect the Israeli defense minister one bit. He believes that as soon as Abbas is gone, it will be possible to find a bolder, alternative leadership in the West Bank with which Israel can engage in real dialogue. That at least is his official position.

There are those in the defense establishment who worry that Liberman, like Prime Minister Benjamin Netanyahu, would prefer that Hamas take over the West Bank, if only to prove once and for all that there is no partner for peace, that there is no one to talk to and nothing to talk about, and that any talk that does take place is little more than “kalam fadi” — Arabic for idle chatter.