Prime Minister Naftali Bennett tours the border with Gaza; Israel continues to seek guarantees that Hamas will not use money Qatar has targeted for poor Gazans for military activities. 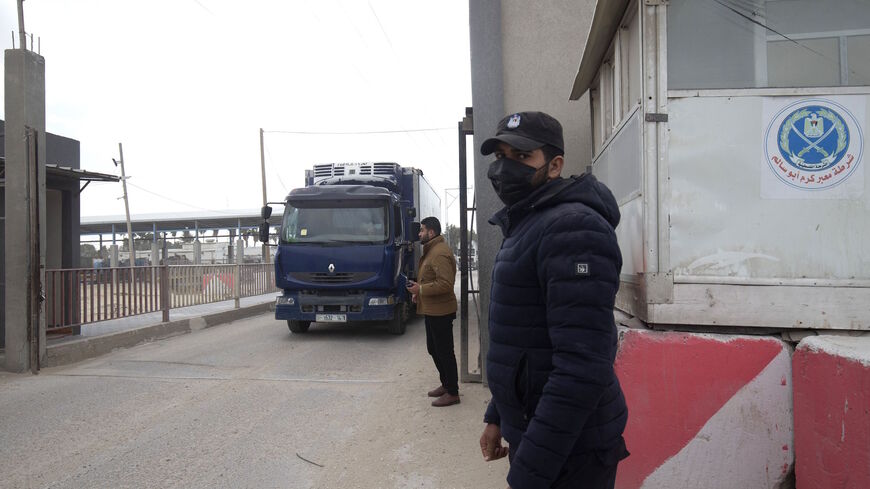 Palestinian security forces stand guard as a truck carrying the first shipment of Russia's Sputnik V vaccine for COVID-19 arrives on the Palestinian side of the Kerem Shalom border crossing south of Rafah in the southern Gaza Strip on Feb. 17, 2021. - SAID KHATIB/AFP via Getty Images

Israeli Prime Minister Naftali Bennett and Defense Minister Benny Gantz toured the environs of the Israel-Gaza border Aug. 17. They met with Israel Defense Forces (IDF) soldiers serving in that sector, visited the Gaza border division's command room and toured the Iron Dome missile defense system located nearby. The tour took place a day after Israel’s southern town of Sderot was targeted by two rockets fired from the Gaza Strip — the first incident of its kind since the May 10-21 conflict. One rocket was intercepted by the Iron Dome system; the other did not cross into Israel.

"The purpose of this tour was to see that the IDF, Southern Command and the Gaza Division are prepared, and they are. Our mission is to provide long-term security to the citizens of the south and along the Gazan border. We will act at the time, place and conditions that we see fit," said Bennett.

The prime minister responded to reports that Hamas did not take responsibility for the rocket fire. The reports said Hamas relayed the message to Israel via Egypt shortly after the incident. Bennett said during the tour that Israel considers Hamas, not any rogue group or any other organization, responsible for the fire.

Gantz said during the tour, "Following 'Operation Guardian of the Walls' we announced that the status quo will be no longer. Our only interests regarding the Gaza Strip are quiet, security and the return of our boys." Gantz was referring to the bodies of two IDF soldiers, Hadar Goldin and Oron Shaul, held by Hamas since 2014, and to two Israelis, Avraham Avera Mengistu and Hisham al-Sayed, held in captivity in Gaza since 2014 and 2015 respectively.

Gantz also referred to the humanitarian crisis in Gaza, saying, "We will facilitate humanitarian relief initiatives funded by Qatar and other actors, provided that the money reaches the right places. … We are not the enemies of the Gazan people. The real enemy is Hamas, which is taking Gaza residents hostage."

The issue of Qatari financial assistance to Gaza continues to surface. Bennett’s government had put a stop to the transfer of Qatari cash to Gaza, demanding that another mechanism be developed, to ensure that the money does not fall into the hands of Hamas operatives or be used for the construction of terror tunnels and weapons. For the past few weeks, Qatar and the United Nations have been trying to establish a mechanism where the money would be transferred to Gaza through Palestinian banks in the West Bank. Jerusalem had indicated it would accept such an agreement. But what seemed at the beginning as a promising solution did not work out. The banks fear that if the money ends up in hands of Hamas operatives, the banks would be exposed to US lawsuits. American law enables legal action, by families of terror victims, against banks assisting terror groups. Another unsolved problem is the payment of monthly salaries for Gaza’s 27,000 civil servants.

Shortly before the launching of the two rockets, Hamas warned that it would not hesitate to escalate the security situation with Israel if Qatari financial aid and construction supplies are not transferred to the Strip within a few days. Some 100,000 needy families in Gaza have not received Qatari financial support for four months.

On Aug. 16 it was reported that Qatar and the United Nations are close to an agreement for Qatari aid money to reach the poor families in Gaza. The solution now being negotiated is for the funds to be funneled through the UN and not through Palestinian banks. If so, the Qatari money would be considered a donation for humanitarian assistance. The United Nations would then add it to its already existing food program in the Strip.

With such talks underway, the rocket fire surprised Israel. Assessments in Israel suggest that the fire was triggered by an Aug. 16 incident in the West Bank town of Jenin. Israeli security forces responded to fire opened at them in Jenin by Palestinians, killing four of them. But assessments also say that Hamas’ frustration over the delay in the Qatari money played a role in the decision to allow the rocket fire. Since the end of Operation Guardian of the Walls in May, Israel and Hamas had been negotiating indirectly, with Egypt as mediator, for a long-term agreement, so far without results.