No deal with Hamas will pay off for Israel

Israel's military leadership continues to support efforts to reach an arrangement with Hamas despite knowing that any cease-fire will enable the group to increase its military capabilities. 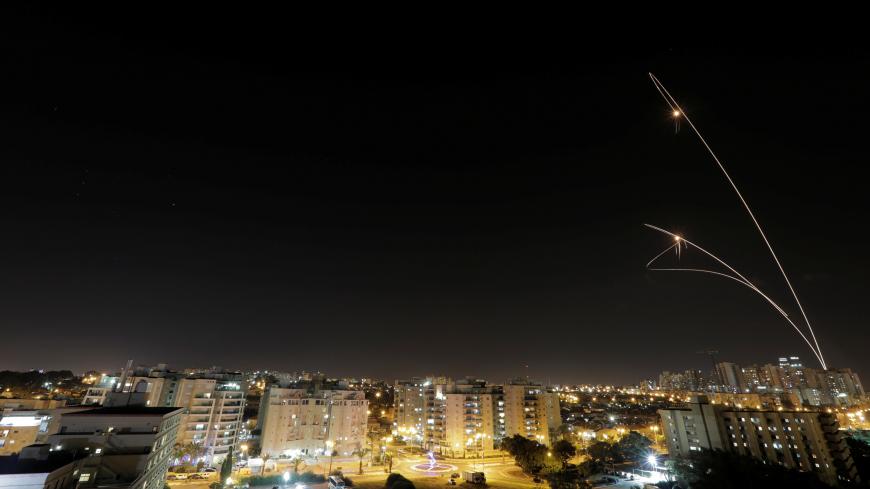 A general view of the Israeli city of Ashkelon is seen as the Iron Dome system fires near the Israel-Gaza border, Nov. 12, 2018. - REUTERS/Amir Cohen

More than 300 rockets were fired from Gaza toward Israeli territory from the afternoon to the late evening hours of Nov. 12. The concentrated and massive shooting spree testified to the enhanced operational abilities of Hamas and Islamic Jihad, as well as their large stockpile of rockets that had been ready to fire.

During the 2014 Israel-Gaza conflict, Hamas and the smaller organizations it worked with were careful to fire a limited number of rockets a day — about 50 to 150 on average — to extend the fight for as long as possible. The fighting went on for 50 days.

Yet despite the blockade and economic distress of the Gaza residents and of the Hamas organization itself, the capabilities of Hamas’ military wing have greatly improved since 2014. Hamas continues to invest hundreds of millions of dollars into extending the range of its rockets, improving their precision and upping their manufacturing pace. There is also its ambitious tunnel project and special operations training for its Nukhba combat units. It is no wonder that after such tremendous military investment the movement needed Qatari money to pay the salaries of its workers, lest its government dissolve.

In recent years, Israel’s defense system has kept a close eye on Hamas' arms stockpiling. In addition to gathering 20,000 rockets and mortar shells, Hamas has developed advanced combat weapons such as multicopper drones and small unmanned aerial vehicles and attempted to develop “tie-breaking” weapons. In spite of this progress, Israel was willing to reach an arrangement with Hamas that would ease the Gaza blockade and enable the transfer of money to the Strip that could not necessarily be controlled. Even if Israel could oversee the use of money from donor countries, the blockade easement would certainly enable Hamas to continue to allot the lion’s share of its resources to develop its military might while Qatar underwrites Hamas’ bureaucratic and civil apparatuses.

Recent months have seen mediation talks about crafting an arrangement with Hamas, but will an arrangement to buy peace and quiet in the south also give Hamas a golden opportunity to beef up its military might? When Prime Minister Benjamin Netanyahu was in the opposition, he opposed any agreement with Hamas and argued that the Hamas regime should be knocked down and certainly not allowed to fortify itself. But now the Israeli public seems not to be asking this important question.

Sheikh Ahmed Yassin, Hamas’ spiritual leader until he was killed in 2004, used to say that it was permitted for his movement to agree to a cooldown period when the enemy is strong and cannot be overcome, to allow Hamas to build up its strength. Yassin used the Quranic terms "tahadiya" (cooldown) and "hudna" (cease-fire), tactics adopted by Prophet Mohammed to outwit his enemies, to explain his agreement to a hudna under Egyptian mediation in the course of the second intifada. But the cease-fire collapsed in less than two months after the terror attack on a Jerusalem bus that killed 23 Israelis. Israel retaliated by assassinating Ismail Abu Shanab, one of the highest-ranking members of Hamas' political leadership in Gaza.

Israel’s defense system is well acquainted with the hudna tactic, yet almost all of Israel’s defense system supports an arrangement now. In a conversation with Al-Monitor several hours before the rocket fire began on Monday, an Israeli security source explained that the benefits and dangers of the tactic are being taken into consideration among other factors. The idea is that if such an arrangement is achieved, the IDF will carry out its side of the agreement, yet continue to respond to any Hamas act of violence as if no arrangement existed.

For example, an IDF operation that was supposed to be secret was uncovered on the night of Nov. 11. It was two days after Qatari money was sent to Gaza and it seemed that an arrangement was on its way. The objective of the operation remained undisclosed, but according to the Hamas version, Israel planned on installing a wiretapping device in the Strip. One way or another, Chief of Staff Gen. Gadi Eizenkot said the next day that it was “a very meaningful operation to Israel's security.”

Yet despite all this, Netanyahu prefers to take the arrangement route with the approval of the cabinet and the support of the defense system. This means that numerous limitations will be imposed on the IDF while important resources will be bestowed to Hamas, allowing it to continue to develop its military capabilities.

As of Tuesday morning, Hamas had fired more than 400 rockets at Israel, proving that the deterrence Israel achieved in the bloody 2014 Israel-Gaza conflict has worn off completely. Now Hamas' leaders seem to have decided that their top priority is to threaten Israel — even at the price of the collapse of an arrangement that would have ensured their continued rule over the Gaza strip.

Currently, Hamas arrogantly continues its threats to escalate its assaults on Israel. But whether a cease-fire is achieved immediately or it takes several more days to reach an arrangement, it is clear that Hamas will become an even greater security threat in a year or two, or as long as any arrangement holds. The communities adjacent to Gaza, the southern towns of Ashkelon and Beersheba and even cities in the country’s center will continue to be Hamas' targets.

Hamas is sure to take advantage of a cease-fire to meticulously plan its future attacks on Israeli localities with even greater precision and intensity. In light of the events of recent days, this is an important point for Israel’s political and security leadership to think about.