Lacking any real policy on the Gaza Strip, Israel keeps imposing and then easing restrictions on the suffering of Gaza residents. 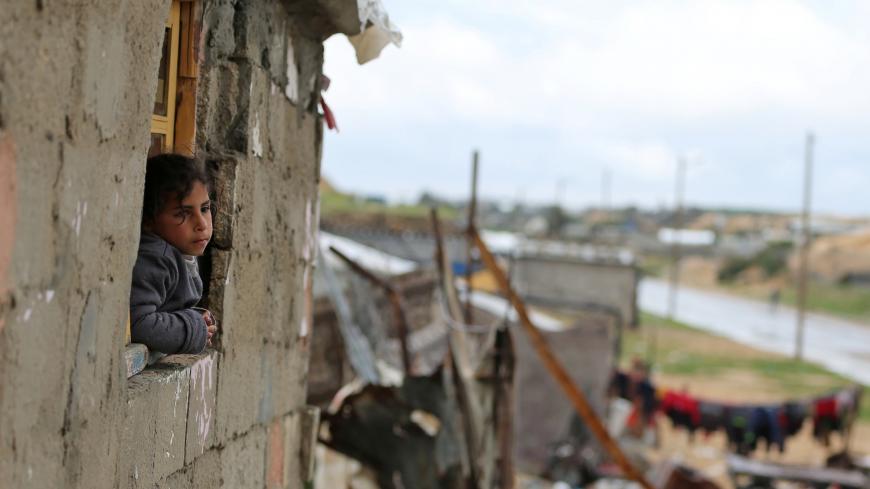 On the evening of Feb. 22, the chair of the Yisrael Beitenu party, former Defense Minister Avigdor Liberman, dropped a bomb in the Channel 12 “Meet the Press” studio. He revealed — in violation of the military censor’s gag order — that the head of the Mossad and the military commander of Israel’s southern front had visited Qatar two weeks ago at the behest of Prime Minister Benjamin Netanyahu.

“They simply begged the Qataris to keep sending money to Hamas after March 30. The Qataris have said they will stop sending money on March 30,” Liberman said, striking at his rival’s soft underbelly. “Suddenly Netanyahu appears as the defender of Hamas, as though it was an environmental organization,” he added, reminding viewers that in 2019, Hamas fired 1,500 rockets at Israel, killing four civilians. “This is a policy of submission to terror … and paying protection money [to Hamas to buy calm]," lashed out the man who holds the balance of power in Israeli politics these days and will likely determine who the next prime minister will be after the March 2 elections.

Unfortunately, the experienced interviewer, Rina Matzliah, failed to ask Liberman what he himself had talked about with Qatari Foreign Minister Mohammed bin Abdulrahman Al Thani during a meeting on June 22, 2018, at Larnaca International Airport in Cyprus. Did then-Defense Minister Liberman not ask the Qatari minister to help the Gaza environmental group to preserve the enclave’s wildlife?

The deluge of spins dumped on the Israeli public in these pre-election days makes a shambles of the collective memory and of the voters’ judgment. Who remembers now, as residents of the town of Ashkelon are under rocket bombardment from Gaza, the Likud party’s 2006 election slogan, “Strong on Hamas — Benjamin Netanyahu,” and his 2009 pre-election pledge to residents of southern towns, “We will bring down the Hamas terrorists. We will restore security to residents of Ashkelon, Ashdod, Sderot and Beersheba”?

Addressing the annual Herzliya Conference a day later, on Feb. 4, 2009, then-opposition leader Netanyahu — the one currently sending emissaries to hit Qatar up for donations to advance a deal with Hamas — argued that the Kadima party government of those days was perceived by Hamas as weak. “The 'tahadiya' [Arabic for "cease-fire"] helped Hamas produce more sophisticated rockets and increase their firepower and damage,” he said, harshly attacking the government and then-Foreign Minister Tzipi Livni for halting the Israel Defense Forces’ (IDF) December 2008-January 2009 offensive against the Gaza Strip, dubbed Operation Cast Lead, without toppling Hamas.

In the best of political traditions, when the guns fire, so does the opposition. This week it was the turn of Blue and White party Chair Benny Gantz to promise that if he comes to power, the children of Ashkelon will sleep soundly. “This illogical, ongoing situation forced upon you pains me, personally,” Lt. Gen. (Res.) Gantz wrote on his Facebook page on Feb. 23, “and I intend to rectify it.”

And how does he intend to fix it? By reaching a long-term cease-fire arrangement with Hamas and bringing home the civilians and the bodies of two Israeli soldiers held in Gaza. “There is no other option,” he added. Still, who else other than the former chief-of-staff of the IDF, a veteran of inconclusive battles in the Gaza arena, knows that the word “victory” is not relevant when it comes to an asymmetric conflict between a state and a guerrilla organization waging war with its back to the sea? The lessons of the past decade prove that the oft repeated term “arrangement” is at best a hollow slogan and at worst a deception.

This is the state of Israeli “policy” on Gaza just this month, February 2020:

Feb. 1: In response to rocket fire from Gaza and the launch of exploding balloons, Israel decided to revoke 500 so-called merchant permits allowing Gaza residents to work in Israel and the West Bank. The decision was officially attributed to “security considerations” although the permits were granted after individual checks were conducted of the recipients under instructions from the security forces.

Feb. 13: A “security source” tells the media that “if calm is maintained, Israel will restore the fishing zone” to its previous width.

Feb. 15: COGAT announces that “following rocket fire from the Gaza Strip at Israel, the civilian measures planned for the Gaza Strip — expanding the fishing zone, restoring 500 merchants’ permits and restoring the entry of cement — are canceled.”

Feb. 18: COGAT announces that “following relative calm in recent days and a halt to the explosive balloons, it has been decided following security consultations to restore the civilian measures suspended at the end of last week.” The most important step for the Palestinians was Israel’s decision to grant an additional 2,000 work permits for Gaza laborers under the guise of “commercial” permits to traders. In the blink of an eye, the “security considerations” were gone, exposing Israel’s use of economic measures to impose collective punishment of the civilian population and the ongoing policy of separating Gaza and the West Bank.

Feb. 23: The Erez crossing into Gaza is shut down until further notice following renewed rocket fire at Ashkelon and additional towns in the region. In addition, the fishing zone is limited to 6 nautical miles. Islamic Jihad assumes responsibility for violating the temporary truce in response to an event, captured on camera, in which an army bulldozer was seen dragging the body of a Palestinian killed by Israel inside the Gaza Strip while allegedly trying to place an explosive device along the border.

The word “relaxation” of restrictions is a euphemism for the “carrot-and-stick” method used since olden days by foreign conquerors to rule the natives. However, the carrots Israel offers the enclave’s 2 million residents — temporary work permits, expansion of the Gaza fishing zone and raising donations from Qatar — pale compared to the club wielded by Israel’s nearly 12-year blockade of the enclave. The blockade cuts the Gaza Strip off from the world and chokes its economy. In order to end the suffering of the Israelis living in Gaza border communities, the next government must replace the temporary, failed “arrangements” with a permanent agreement with Gaza that will provide hope for the Palestinians living there, too.