Israel’s political and security echelons are intently nurturing ties and coordinating with Russia to oust Iran from Syria. 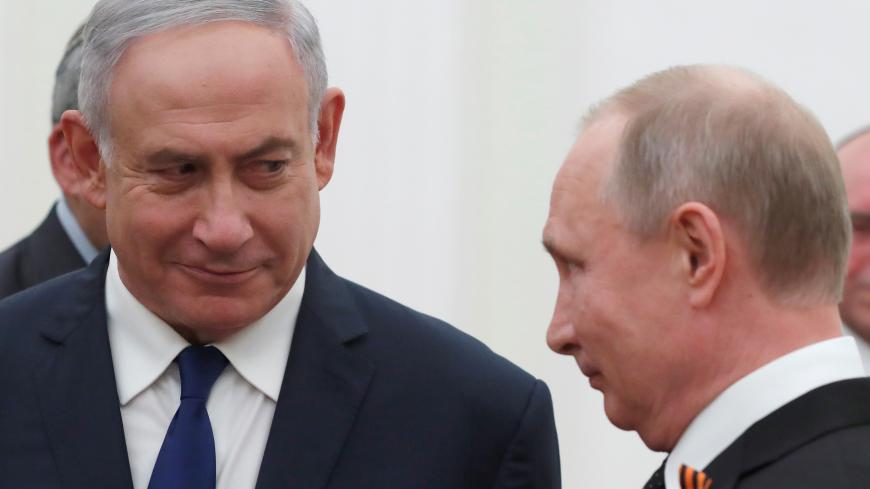 In honor of Russia’s Independence Day, a traditional reception was held on June 14 in Sergei's Courtyard, a 19th-century complex in Jerusalem built for Russian pilgrims. This annual event usually doesn't attract significant media or governmental attention, but this year, it resembled Israel’s Independence Day more than the typical Russian one. Prime Minister Benjamin Netanyahu and a large number of government ministers and high-level officials graced the event with their presence, including Jerusalem Affairs and Environmental Protection Minister Ze’ev Elkin, Aliyah and Integration Minister Sofa Landver and Regional Cooperation Minister Tzachi Hanegbi. In addition, this year’s celebration attracted a large number of people in uniform, mainly on the Russian side.

“There were quite a number of high-level Russian generals and military men,” one of the invited guests told Al-Monitor, speaking on the condition of anonymity. “It almost resembled an event of the Red Army with the conspicuous presence of so many men in uniform, including some who serve on the Syrian-Lebanese front. It was almost as if they simply dropped by Israel to meet their Israeli counterparts, taking advantage of the Russian Independence Day event to do so.”

Lt. Gen. Vladimir Ivanovsky, the head of Russia's Military Police Directorate, also attended. His directorate is responsible for enforcing the arrangement on Syria’s southern front agreed to by the United States, Russia and Jordan. Israel continues to emphasize at every possible opportunity that it has no connection to this arrangement, that it is not party to it and that Ivanovsky simply paid a polite, reciprocal visit to Israel after his Israeli counterpart had gone to Moscow. A military source told Al-Monitor, however, that during the visit, Ivanovsky discussed the situation on the Syrian southern front, especially the Golan, with higher-ups in the Israel Defense Forces (IDF) and in the Israeli security establishment. The Syrian issue tops Israel’s list of priorities.

Before speaking at the Russian diplomatic event, Netanyahu met with Russian Ambassador Anatoly Viktorov in Tel Aviv. The two spoke privately for quite some time, while Russia played the opening match of the FIFA World Cup against Saudi Arabia. Defense Minister Avigdor Liberman could not attend the diplomatic event because he had to participate in a military ceremony of the Kfir Brigade, but as a true soccer fan, he wished the Russian team success, despite the “secret romance” in recent years between Riyadh and Israel.

As it turns out, relations with Moscow seem to be more important to Israel today than any others, except for those with Washington. While the American commitment to Israel in the Donald Trump era is a given, Israel is also investing much energy and creativity in its budding affair with Russia. Liberman has a close relationship with his counterpart, Defense Minister Sergei Shoigu, speaking by phone at least once a week, in Russian, of course.

Those among us with good hearing have noted a change in Israeli rhetoric over recent months with regard to the Iranian and Hezbollah presence in Syria. Until recently, Israel constantly demanded that Iran and its proxies “distance themselves” from the border and bandied about different versions of the number of kilometers involved, the most popular being at least 60 kilometers, or 37 miles.

Israel has since changed its tune. Netanyahu and Liberman are now loudly demanding that Iran and Hezbollah have no presence at all in Syria. This demand has not yet been addressed in detail by the Russians or the Americans, but the Israelis repeat it at every opportunity. What has caused this evolution?

According to Liberman, it is a logical demand based on the current situation on the ground. “As soon as it became clear that Iran and Hezbollah are trying to transfer long-range missiles to Syria [with ranges of 400-plus kilometers or about 250 miles], the demand that they distance themselves from the [Israeli] border became pointless, because they can launch long-range missiles from eastern and northern Syria, too,” Liberman told Al-Monitor. “We are determined to prevent this from happening and will do what needs to be done to accomplish this goal — unless all the other concerned parties also make it clear to the Iranians what they must do.”

Thus, Israel continues to tighten the rope on Syria, and at this stage, it looks like Israel won’t let go. It is taking advantage of Russian President Vladimir Putin’s head being wrapped up in the FIFA World Cup, with Russia playing host, and therefore wanting peace and quiet, which is what Israel and Trump’s administration are closely coordinating. Netanyahu and Putin talked by phone on June 15. Their actions suggest they are coordinating these days more than ever.

In the background are persistent reports about a scheme involving Washington, Moscow and Israel. Accordingly, Trump demanded that the Europeans readmit Russia to the G-7 forum of highly industrialized nations, because the Russians had agreed in general to Israel’s request to distance Iran from its borders. Jerusalem strongly denies the three-way coordination but does concede that with regard to Iran being on its border, Washington and Jerusalem see eye to eye.

Not leaving anything to chance, the IDF conducted a comprehensive exercise on June 10 in the Golan Heights. In the course of the maneuvers, the Israeli air force employed dozens of fighter jets in a display of power and determination meant to show Tehran (once again) that Israel has no intention of abandoning its “no Iranian presence in Syria” policy.

“Our failure in allowing Hezbollah to become a missile-and-rocket power on our northern border will not be repeated,” a high-level Israeli Cabinet member told Al-Monitor on the condition of anonymity. “They want to replicate Hezbollah in Syria as well, and that won’t happen, even at the cost of all-out war.”

Meanwhile, Israel draws encouragement from intelligence reports that US sanctions on Iran, pursuant to Trump withdrawing the United States from the Iranian nuclear agreement, have inflicted massive damage on the Iranian economy. In fact, the damage is much greater than originally predicted by Israeli intelligence experts. Thus, pressure on the mullahs is growing, and Israel believes that ultimately, it will cause one of two things to happen: either a real change in Iranian policy regarding the spread of terror and establishment of a second front against Israel or the regime will fall.

Israel has recently been conducting itself as if under the impression that it is succeeding on all fronts and that its regional power is only increasing. On the one hand, those are pleasant thoughts indeed, but on the other hand, those kinds of feelings usually create the greatest disasters of all.