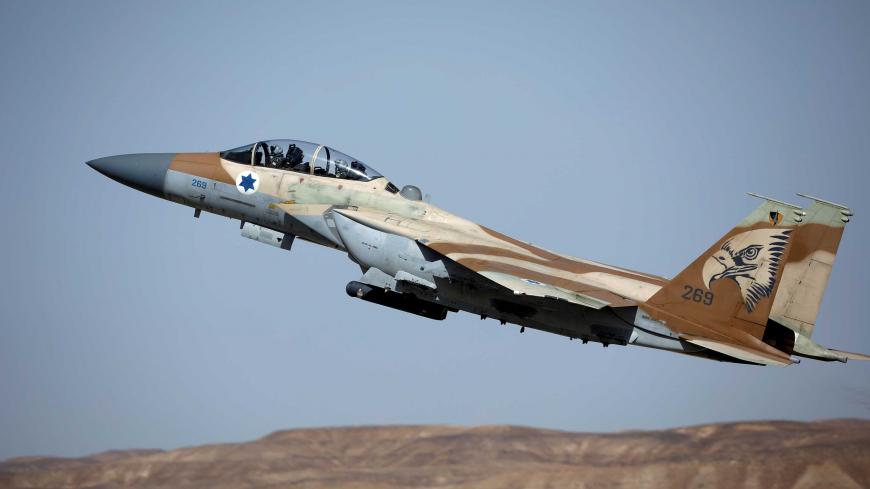 An Israeli F-15 fighter jet takes off during an exercise at Ovda Military Air Base, southern Israel, May 16.

On Sept. 8, a Syrian government factory for producing precision missiles came under aerial attack. The target is close to the village of Masyaf, in western Syria. The foreign press attributed the airstrike to the Israeli air force, but Israel has not accepted responsibility and has not responded. On the heels of the assault, and given that on almost the same day a huge Israeli military exercise began in the north, the next few days were tense. The tensions relate to sensitive equations formulated among Israel, Syria, Iran, Hezbollah, assorted rebel movements and Russia.

Israel has maintained radio silence about the attack and hopes that the Syrian regime will keep mum as well, as it did in September 2007, when unidentified jets destroyed Syria's nuclear reactor in the middle of the night. (Israel never owned up to that attack either). This time, the even more important question is how the Russian government will react. Will it — for the first time since establishing a military presence in the region — raise a yellow card, warning against Israeli attacks on Syrian territory?

The Sept. 8 attack took place 10 years and a day after the 2007 airstrike on the nuclear facility in Deir ez-Zor. Satellite photos made public a few days after the recent airstrike showed that the missiles fired by the unidentified planes had been precise: Only three of the plant’s buildings showed damage, and only in certain parts of the buildings. In other words, the attack was a surgical strike. The assessment is that the attacking force had qualitative and remarkably precise intelligence. In their crosshairs were only those sections of the facility that produced the kits that turn standard missiles into precision missiles.

Israel views Iran's efforts to provide Syria and Hezbollah with the technology to produce precision missiles as a clear strategic danger. Were the efforts successful, in the next conflict, it would allow Israel’s enemies to hamper the Israeli air force's ability to effectively strike strategic targets. It is altogether possible that in the early hours of Sept. 8, what took place is one round in Israel's struggle against the Iranian “precision project” in Syria and Lebanon.

Further complicating the situation, it turns out that a 400-S Russian missile battery is positioned a short distance, about 19 miles, from the targeted plant. A short distance west is another site suspected of being an Iranian precision missile plant. That facility was not attacked. Whoever hit the Syrian facility Sept. 8 had to do so while evading Syrian aerial protection and maintaining complete radio silence. This is the sensitive and dangerous game that the various sides have been playing for several years. So far, they have succeeded in avoiding an escalation or explosion.

Numerous commentators in the Middle East believe that the Iranians and Syrians expect Russian President Vladimir Putin to curb such Israeli airstrikes. At the time of publication, the Russians continued to maintain their silence. As to what is going on behind the scenes among the various actors, time will tell.

Despite Putin's having met frequently with Netanyahu, the Russian president still views Iran as a strategic partner in his Middle East policy. Putin was also the one who personally saved the Assad regime from collapse two years ago. On the other hand, Putin understands Israel's concerns. So to what extent will Putin be involved in what is taking place near his forces in Syria? Israel can only hope and pray for the day when the Russian squadrons and aerial defense missiles in Syria return to Russia. At this stage, that dream is far off.

The airstrike this month was completely different from the dozens of such strikes that Israel has conducted in recent years along the seam of Syria and Lebanon. Israel's outgoing air force chief, Maj. Gen. Amir Eshel said, in an Aug. 25 interview with Haaretz that the air force had conducted close to 100 airstrikes on strategic-weapons convoys making their way from Syria to Lebanon. Almost all of the attacks took place on Syrian territory, and with one exception, no anti-aircraft fire was directed at the attacking planes.

The Sept. 8 attack, however, did not involve weapons convoys, rockets or missiles, but an official Syrian facility, a strategic enterprise of the Syrian regime in the heart of Syria and in proximity to a strategic Russian site. Some view the strike as a powerful Israeli message not only to Assad, but also to the big powers, that Israel has no intention of forfeiting its security interests to anybody. According to this view of events, the Netanyahu-Putin meeting Aug. 23 in Sochi was not particularly successful.

The recent airstrike took place, as noted, against the backdrop of a huge military exercise on Israel's northern front involving different branches of the Israel Defense Forces (IDF). It was the largest maneuver of its type in the last 19 years and involved an IDF gaming of a campaign against Hezbollah and Syria simultaneously. The IDF has been talking for quite some time about the need for the absolute defeat of Hezbollah in the next round of war.

Over the last decade, Israel has accumulated a good deal of qualitative intelligence and has dramatically improved air force firepower and attack abilities and acquired additional means and methods. The open question is whether Israel, the next time a conflict erupts, will insist on conducting ground maneuvers in Lebanon or forgo them. Will Israel consider the dangers involved to be greater than any possible benefits to be gained? One way or another, the higher-ups in Israel are convinced that if a confrontation breaks out between Israel and Hezbollah, it will be shorter, much more aggressive and far more destructive than anything to date.

“It is clear to us that damage will be inflicted on the Israeli side as well and that there will be many casualties,” a senior Israel military source told Al-Monitor on the condition of anonymity. “But the other side will suffer significantly much more damage, much more strategic damage. It will set Lebanon back by decades.”

In the next round, Israel is intent on marking Lebanese sovereignty as a legitimate target. From the first minute, it will attack the country’s strategic infrastructure. As far as Israel is concerned, the country of Lebanon has become Hezbollahstan. At the moment, none of the sides really want to get to that stage.