Friction heats up between Russia, Israel over downed aircraft

Jerusalem is worried that the conflict with Moscow caused by the downing of a Russian jet in Syria will paralyze IDF activities and enable Iran to transfer arms to Hezbollah. 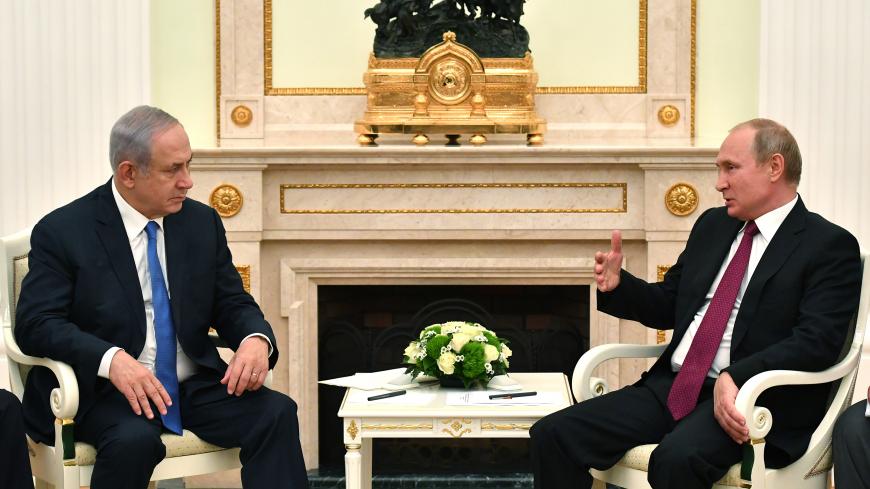 Israeli Air Force Commander Maj. Gen. Amikam Norkin sat in the Kremlin Sept. 20, presenting his Russian counterparts with conclusive proof that Israel acted in good faith, professionally and with precision during an air raid in Syria that led to the downing of a Russian spy plane. Yet at the same time, the Russians were renewing their anti-Israel offensive: The Russian Embassy in Israel released a scathing statement saying that Israel’s “irresponsible” action caused the death of 15 Russian air crew members. Meanwhile, back at the Kremlin, the Russian Foreign Ministry issued a statement of its own, saying that Israel must conduct a more serious investigation into the series of events that led to the disaster.

The Russians are playing a game of cat-and-mouse with Israel. In a statement he released Sept. 18 to restore calm, Russian President Vladimir Putin declared that Israel did not down the aircraft. Nevertheless, the Russians are continuing to raise and lower the flames in this serious crisis with Jerusalem. Israel’s greatest concern is that the Iranians will make a hasty effort over the coming days to expedite the transfer of precision and long-range missiles to Hezbollah, taking advantage of Israel's temporary freeze on operations and the fact that for the next two or three weeks, the IDF would not dare to continue its marathon attacks after having intensified them over the last year.

On the other hand, Israel continues to insist that, a senior security source told Al-Monitor on condition of anonymity, “If arms shipments that could put us at risk continue, we will act as we have in the past. Israel reserves the right to defend itself."

During his talks in Moscow, Norkin presented the Russians with a detailed air force (IAF) report about the incident, in English and in Russian. The report included the numbers of anti-aircraft missiles that the Syrians fire imprecisely, even indiscriminately in response to Israel’s aerial attacks. It is assumed that Norkin was trying to prove to his Russian counterparts that it was the Syrians who acted irresponsibly.

Norkin noted that during Israel’s aerial bombardment of Base T-4 this May, the Syrians fired 170 surface-to-air missiles. “This kind of heavy fire has no specific target apart from the enemy’s assumed position. It could endanger any random aircraft in the area, including those that are not in the exact area,” a senior Israeli military source told Al-Monitor on condition of anonymity. “The Russians need to understand that the Syrians are not correctly operating the aerial defense systems that they provided them. We must now hope that the Russians do not provide them with even more sophisticated systems, which would increase the risk to all aircraft in the region.”

Israel believes that Iran is trying to concentrate its activities on increasing Hezbollah’s supply of “tie-breaking” weapons, particularly in those areas with an extensive Russian presence, in the hope that it will create friction between Israel and Russia. According to this assessment, the downing of a Russian jet as a result of the IAF attack is a “tie-breaking” incident planned in Tehran in the hope that the Russians would instruct Israel to declare northern Syria — or at least its airspace — off limits to Israeli jets. While such a declaration has not been made, the Russians announced Sept. 19 that the area is partly closed for a week so that they can conduct a "military exercise.” It is clear to all the parties involved that this is an exercise in leadership.

As noted, Israel is concerned that the Iranians will take advantage of this window of opportunity, though it is not yet clear how Israel will respond. The IAF does not need to penetrate Syrian airspace to conduct its attacks. Israel has other means at its disposal, including missiles fired from naval vessels at sea. Regardless, Israel will find it much more difficult now to make any decision about attacks in Syria.

According to an Israeli source with intimate knowledge about the Moscow meetings who spoke on condition of anonymity, Norkin told the Russians, “Our aircraft were no longer in the region. They were already deep within Israeli airspace when the Syrians began to fire anti-aircraft missiles at an insane pace.”

The only problem is that as of Sept. 21, several hours after Norkin’s return from Moscow, no one in Israel is willing to take responsibility and declare the crisis over. According to reporting in Lebanon, Russia even rejected Norkin’s account.

Also on Sept. 21, head of the Israel Atomic Energy Commission Ze’ev Snir announced that the Iranian threat against Israel’s nuclear facilities requires that these facilities be upgraded and reinforced. “We cannot ignore the repeated and explicit threats made by Iran and its proxies,” Snir said at a conference of the International Atomic Energy Agency. “These outrageous threats require Israel to take action and continue to protect and defend its nuclear facilities. These facilities are constantly upgraded and reinforced, in line with IAEA safety guidelines, in order to withstand any attack.”

While it came as an absolute surprise, Snir's statement is an integral part of the low-grade war that has been taking place between Israel, Iran, Hezbollah and the Syrian regime over the last few years. Israel has been signaling to the Iranians that it is not worried about threats to the Dimona nuclear facility.

On the same day that Israel made this announcement, Hezbollah Secretary General Hassan Nasrallah delivered an exceptionally bellicose speech, in which he increased his threats against Israel significantly. He described Israeli attacks in Syria as “intolerable” and claimed that if a full-blown war breaks out between the parties, Israel will face the unknown, given the large number of precision missiles still held by Hezbollah despite Israeli attacks. Prime Minister Benjamin Netanyahu was quick to respond, “If he confronts us, he will get a blow that he cannot even imagine.”

In Israel, behind the scenes, Netanyahu’s frequent statements as well as the recent statement by Snir have been subject to criticism. “Why do we have to get into these squabbles?” a former senior defense official commented to Al-Monitor on condition of anonymity. "Instead of letting them talk and focusing on action, we are heating up the front with a ridiculous war of words.” The same official was also critical of a speech that Netanyahu gave recently at the Dimona facility. It happened in August, during a ceremony at which the compound was named after former President Shimon Peres. Netanyahu said, “Whoever tries to hurt us, we hurt them.”

“Why put Israel’s nuclear facilities in the spotlight when you are demanding that the world dismantle Iran’s nuclear infrastructures? Why not let the other party speak and make its statements while we use our old tried and true weapon: silence?” the senior official said. “Silence is golden.”