Another meeting between Prime Minister Benjamin Netanyahu and Russian President Vladimir Putin was a chance for Netanyahu to boast of his Russian ties with Putin and emphasize a new security threat ahead of the elections. 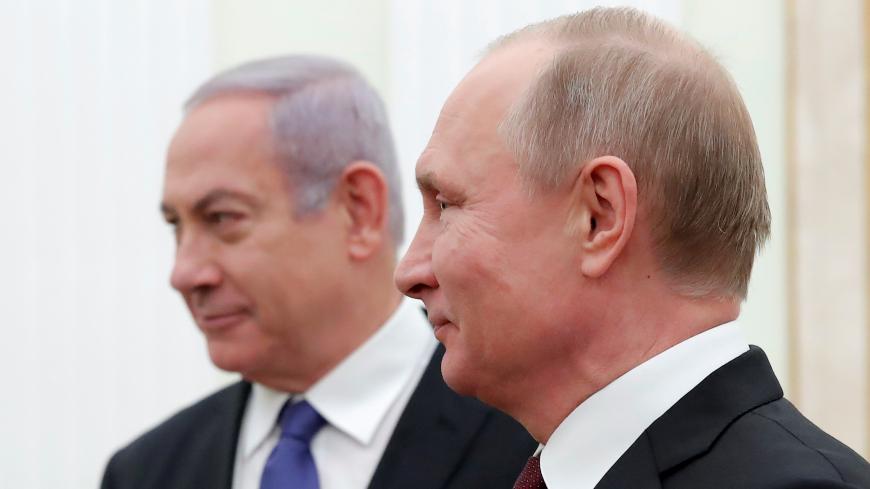 Prime Minister Benjamin Netanyahu will pass up no opportunity for political points as the April 9 elections approach. Today, April 4, he will meet with Russian President Vladimir Putin in Moscow, their second meeting in about six weeks. The last one took place on Feb. 27, after a long disconnect between the two leaders. This one comes only a few days before the political electoral verdict that will also decide Netanyahu’s personal fate. During this meeting, Netanyahu will also thank Putin. The Arab media reported that Russia was a third country that helped Israel to return the body of soldier Zacharia Baumel, who had been missing for 37 years. After he milked the March 25 celebration with President Donald Trump in the White House, Netanyahu is looking toward Putin, who is still venerated by many former Soviet Union citizens who moved to Israel. In this last-minute trip, Netanyahu is again trying to convey that no one can replace him in terms of international status.

Behind political considerations lies a complex security drama that is not entirely new. According to a report on Channel 13, on his last visit to Israel on March 20, US Secretary of State Mike Pompeo received sensitive intelligence regarding continued Iranian efforts to establish itself militarily in Syria and Lebanon. Pompeo received new details that evidently included the exact placement and aerial photos of a production plant for precision missiles that Iran is secretly building in Lebanon to serve Hezbollah. Netanyahu asked Pompeo to relay the information directly to Lebanese Prime Minister Saad Hariri, who Pompeo met after he left Israel.

The Lebanese got the hint from the Americans that if the Lebanese government won’t halt the construction of the plant, then Israel will be forced to destroy it. A mysterious airstrike hit an Islamic Revolutionary Guard Corps base near Aleppo in Syria March 28, reportedly killing at least seven people. Intelligence Affairs Minister Israel Katz acknowledged Israel's role publicly, contrary to standard government policy. It seems clear at this stage that everyone in the Middle East, especially the Iranian-Syrian-Hezbollah alliance, along with the Lebanese government, knows that Israel is serious about preventing Iranian consolidation in the area.

These developments have put the Lebanese government and Islamic Revolutionary Guard Corps leader Qasem Soleimani, who is in charge of Iran's consolidation efforts in Syria and Lebanon, in an extremely delicate and explosive situation. Israel has a long history of attacking Syrian territory. But operations in Lebanon are another story. Netanyahu and the Israel Defense Forces higher-ups are well aware that an airstrike in Lebanon would be tantamount to declaring war on Hezbollah or even the entire Hezbollah-Syria-Iran front. The question is: How far will Netanyahu go, considering his longstanding aversion to major military operations?

Likud sources who recently talked to Netanyahu feel that the prime minister is dead serious. As Netanyahu’s political demise rapidly approaches, the once-vacillating prime minister has become much more adamant. He may be striving for confrontation, even with hundreds of thousands of rockets and missiles that can be launched at strategic targets in Israel at the murderous pace of 2,000 per day. Such a barrage could knock out the workings of the Iron Dome, Israel’s missile interception system.

According to a high-ranking Israeli military source who spoke to Al-Monitor on condition of anonymity, “A precision-guided rocket and missile manufacturing plant on Lebanon territory, serving Hezbollah, constitutes a threat that is almost on the level of a nuclear program.” The source told Al-Monitor, “This is a strategic event with dramatic influence on our future battlefield. Anyone who transforms hundreds of thousands of [Hezbollah Secretary-General] Hassan Nasrallah’s 'dumb' rockets into precision missiles would make the next war a security challenge that Israel has never yet faced.”

With such a large number of precise missiles, Nasrallah could knock out Israeli military bases, strike urban zones and concentrations of troops and damage intelligence-gathering processes, important roads and civil infrastructure. “We made a mistake last time,” the source said. “We let Hezbollah collect an astronomical number of rockets and waited for them to rust. But rockets placed on the table in the first round will be fired at you in the third round. That was already proven in the Second Lebanon War. The Israeli Cabinet decided that it wouldn’t happen again.”

But this explosive security drama involves intricate political considerations. Netanyahu’s tete-a-tete with Putin, his second one in less than two months and only five days before the elections, is also designed to harm a dangerous colleague of the prime minister, Avigdor Liberman. The former defense minister and Yisrael Beitenu head has been hovering around the Knesset threshold since the beginning of the campaign. Liberman will fight for every vote to earn a position to make the next prime minister’s life miserable. Netanyahu is trying to use Putin to attract the votes of immigrants from the former Soviet Union, who share a birthplace with Liberman and make up a major constituency for him and his party.

But at the moment, this is the least of Netanyahu’s problems. He will cross that bridge if or when he gets to it. Netanyahu has not yet decided whether to cannibalize the parties on his right (Yisrael Beitenu, the New Right, Shas and the Union of Right-Wing Parties). He has yet to choose wether to make a last-ditch effort to attract all their voters, as he did in the 2015 elections, or let them keep their constituencies. If he swallows all the right-wing votes, Netanyahu may win a Pyrrhic victory and find himself without a coalition. If the small right-wing parties fail to pass the Knesset threshold, Netanyahu might not have enough support to form a majority coalition. Netanyahu will have to make his final decision over the weekend, three days before the elections. At the moment, the only non-aggression understanding between Netanyahu and the right is with the radical Union of Right-Wing Parties headed by Bezalel Smotrich. Netanyahu hates New Right leaders Naftali Bennett and Ayelet Shaked on a personal level. On the other hand, if he brings them to their knees, Netanyahu may well find himself in the same position.