There are indications the Kremlin is about to revise its approach to Israel in order to force the Israel Defense Forces into accepting new rules of the regional game. 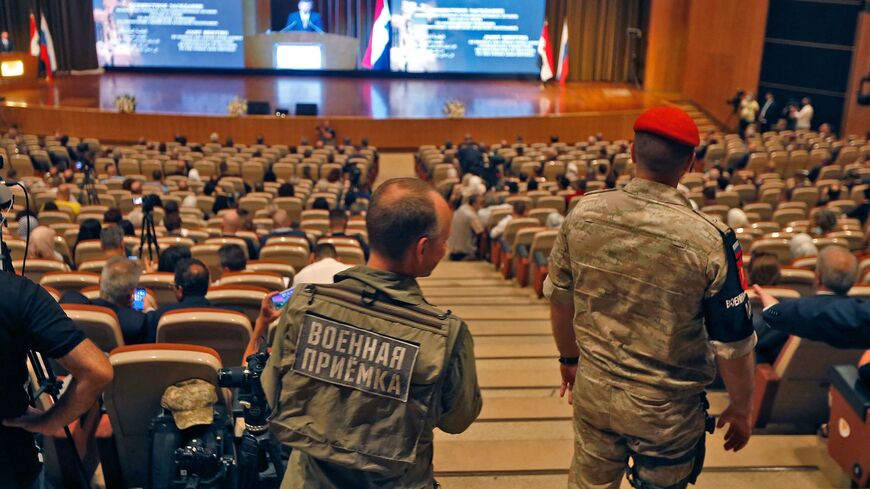 Members of the Russian military attend a Russian-Syrian conference for the return of refugees, in Syria's capital Damascus, on July 26, 2021. - LOUAI BESHARA/AFP via Getty Images

The end of Benjamin Netanyahu’s grip on power in Israel fueled media speculation of what it means for Russian-Israeli coordination in Syria. Sources in Israeli, Lebanese, Saudi and Russian media outlets already began discussing the prospect of an impending crisis between the two countries. The memories have not faded from autumn 2018, when a Russian II-20 reconnaissance plane was hit by Syrian air defenses during the Israeli airstrikes, causing a scandal between Moscow and Israel.

Al-Monitor columnist Ben Caspit has noted Israel’s unease with the possibility of Russia changing its position on Syria. Publicly, the comments indicating a change are largely limited to Russian Defense Ministry’s claims about its supposed success in repelling Israeli missiles with the aid of the Russian/Soviet-made air defense systems. Caspit’s sources among Israeli security officials said that Russia’s bullish rhetoric is little more than a tactical ruse, yet both the target of this rhetoric and its strategic purpose remain unclear. Moreover, Russia’s claims are contradicted by images of targets hit by Israeli missiles in Damascus and Aleppo.

Further fueling the narrative of Moscow altering its stance vis-à-vis Israel are pro-Syrian Lebanese media outlets and the Russian Spring website, which is affiliated with Russian Defense Ministry. Both claim that Russia and Syria conducted military exercises to protect against Israeli airstrikes and that Syria would soon receive additional air defense systems delivered from Moscow. Asharq al-Awsat claimed that the Kremlin is looking into closing down Syrian airspace from Israeli airstrikes.

All this seems to indicate that the Kremlin is about to revise its approach to Israel in order to force the Israel Defense Forces into accepting new rules of the regional game. Such a shift would certainly help Russia to mitigate the challenge that IDF poses to Moscow’s propaganda by testing the strength of the Kremlin's security guarantees to Syria, as well as challenging the superpower image of the Russian military projects. Revising the rules of the game vis-à-vis Israel’s operations in Syria would also help Moscow cover for Iran, Russia’s ally that is conducting talks on a potential return to the original parameters of its 2015 nuclear deal.

However, several factors pertaining to Russia-Israeli interactions in Syria must be accounted for.

First of all, Russia has been trying to restrain the IDF’s activities since 2017. The initial purpose of this effort — including the Russian press claiming that a Russian air defense system had shot down an Israeli missile — was to create the appearance of Syrian government regaining sovereignty over the country.

Netanyahu’s allies find two reasons that explain the growing discord between Israel and Russia regarding Syria. The first is a lack of experience in the new government, which has not done enough to build an effective communication strategy with the Russians, and secondly, with the US administration toning down its pro-Israeli sentiments.

But do those explanations hit the mark? There is some doubt. The subject of Israeli’s activities in Syria was a regular and thorny topic in negotiations between Vladimir Putin and Benjamin Netanyahu even after the 2018 crisis had been resolved. New hotspots of argument sprang up. Take, for example, Netanyahu’s visit to Moscow in 2019. Then, the Kremlin did not hide its disgruntlement over the IDF’s bombings in Syria. The dispute gained even greater importance with Moscow’s campaign to involve Russian investors and foreign carriers in building a new terminal in the Damascus Airport. Putin’s landing at the airport on his Christmas visit to Syria — contrary to his habitual use of the Khmeimim Air Base — was a show of support for that campaign.

Nor there is much novelty in the Russian Defense Ministry’s claims about Israel. In 2020 the ministry put out a rather extravagant statement about a supposed Turkey-Israeli masterplan, whereby Ankara deployed its military convoy to Idlib under the cover of IDF air attacks. In reality, however, those actions did not occur simultaneously.

The ministry also claimed that airstrikes by the F-16 aircraft threatened the security of a plane belonging to the Syrian company Cham Wings from Iran with 172 passengers on board, so that the plane had to perform an emergency landing in Khmeimim. Cham Wings has previously been used to transport Iranian VIPs and militia members. And yet, following that incident, Moscow did on many occasions allow flights from Iran to use the Khmeimim airbase and the supposed Israeli threat did not impede the Iranian crews from unloading their military cargo.

Secondly, the real effectiveness of the Russian air defense systems deployed to Syria is relatively low, mostly due to their haphazard organization. Creating complex, deep air defenses requires a large volume of arms deliveries, which does not suit Russia’s interests from an economic standpoint. Indeed, it remains a mystery how Damascus managed to pay for the deliveries of the Pantsir-S1 systems that the country already has.

Shipments of additional air systems may to some extent impede Israel’s activities in Syria, but Damascus is still faced with a number of fundamental problems, Russian security blogger Yuri Lyamin told Al-Monitor. “To strike targets deep into Syria’s territory, Israel utilizes Lebanese airspace or uses Jordan and eastern Syrian airspace that, for all the practical purposes, remains under the US control,” he said. “As a result, Syrian air defense systems operate from a deeply defensive position repelling rockets and guided bombs. Israeli has a general advantage in this context, while the IDF’s capabilities allow it to deploy attack tactics that overwhelm Syrian air defenses.”

Thirdly, Moscow seems to be faced with the general problem of putting together an effective communication strategy in relation to the Israeli new government. On one hand, the Kremlin was flattered by Netanyahu’s praise of the quality of his relations with the Russian president. Nevertheless, Moscow is now struggling to strengthen institutional foundations for the bilateral relationship with Israel to prove that it rests on something more than the personal rapport between Putin and Netanyahu. On the other hand, Moscow’s efforts to conduct multi-vector diplomacy had on several occasions landed it in a difficult spot. One may recall Russian Ambassador Anatoly Viktorov complaining about Israel’s destabilizing policies in the Middle East exceeding those of Iran. Those statements came shortly after Putin’s emotional speech at the unveiling of the Memorial Candle monument in Jerusalem, where he spoke against the revision of the WWII history. The Russian president’s address was notable as it was the first time he weighed on the topic of the WWII history on the foreign soil.

Another point concerns Israeli’s warming of relations with Ukraine that took shape during Netanyahu’s reign. President Vladimir Zelensky was also among the first world leaders whom Naftali Bennett called after becoming the head of the Israeli government. It is thus not beyond reason to suggest that this warming up — and the omissions made on the track of relations with Israel — may be the reason some investigative journalists are sharing reports about the possible dismissal of Filipp Illichev, a deputy head of the Foreign Policy Department of the Russian Presidency. The department is headed by the Kremlin aide Yuri Ushakov and has evolved into a think tank of sorts that accumulates opinions from the Ministry of the Foreign Affairs and security officials. It is reported that the analysts’ views on the outcome of the last election in Israeli wrongly predicted victory for Netanyahu.

That said, one should not dismiss the role of Israeli policy. Israel lacks depth of its strategic defenses and therefore needs to adopt preventative measures to limit possible threats. This caution is the reason the Israeli army continues to conduct airstrikes in Syrian territory. Yet questions remain as to whether Israel will really change how far in advance it will warn the Russians about a coming attack. Changes in the Israeli political landscape could play a role in such a change, especially given Israel’s complaints concerning the 2018 reconciliation agreement between the Syrian opposition and Damascus that should have put limits on the growth of Hezbollah’s cultural centers and Iranian sites in the southwest of Syria.