Netanyahu gets little from Putin in Sochi meeting

The meeting that took place on Thursday between Prime Minister Benjamin Netanyahu and Russian President Vladimir Putin produced no change in Moscow’s policy on Iran. 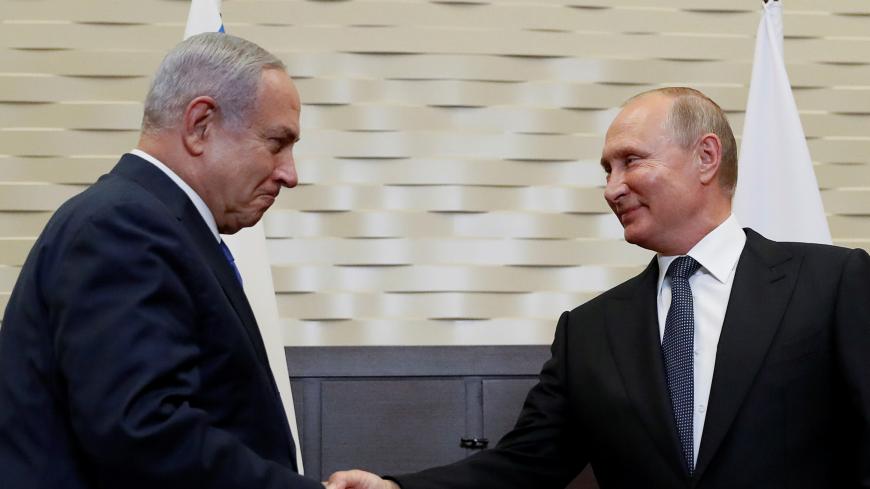 On Sept. 12, just five days before the election, Prime Minister Benjamin Netanyahu flew to Sochi to meet with Russian President Vladimir Putin. At first, Netanyahu wanted something entirely different. He was hoping for a tripartite meeting of the national security advisers of Israel, Russia and the United States, ideally with each of the heads of state — Netanyahu, Putin and President Donald Trump — in attendance. This initiative failed. Putin refused to cooperate, while the United States is busy with something else entirely, i.e., the likely meeting between Trump and Iranian President Hassan Rouhani, much to Netanyahu’s chagrin.

Netanyahu also paid a quick visit to Russia on the eve of the last April election, to Moscow that time. Before his trip to Sochi, he said he planned to speak with Putin about the situation in Syria, insist on freedom of military activity for Israel and explain the severity of Iran’s actions. Did he manage to get anything out of that trip? It is highly doubtful.

Two important statements from Moscow this week preceded the meeting in Sochi — the first dealing with Iran. Unlike Netanyahu, who claimed Sept. 9 that Iran is continuing to violate the agreement it signed with the superpowers in 2015 and is continuing to develop nuclear weapons, the Russian representative in the International Atomic Energy Agency said Sept. 10 that the agency’s findings underscore the civilian nature of the Iranian nuclear program. About a day later, the “annexation brouhaha” erupted when Netanyahu made his big announcement that if he wins another term, he will annex the Jordan Valley and the northern Dead Sea coast. It is likely the prime minister was focused on internal Israeli affairs and his stubborn fight for survival against Yisrael Beitenu leader Avigdor Liberman, his old friend who is now his archenemy, and Yamina (Rightward) leader Ayelet Shaked, whom he loathes. His “dramatic announcement," however, was seen not only in Israel but around the world. Arab states condemned it, the United States announced that American policy regarding the Palestinian territories has not changed and Russia expressed concerns that such a step could lead to a serious escalation of the conflict.

Both cases involved clear Russian policy, which hasn’t changed despite the good relationship between the Russian president and the Israeli prime minister. Russia maintains a close strategic alliance with Iran, even if the two countries do not always share the same interests. Iran is still important to Russia as a key player in the Syrian arena and as a Russian anchor in the Middle East. As for the Palestinians, Russia’s position hasn't changed. It recognized Palestinian independence in 2012, supports the principle of a two-state solution and maintains close ties with both the Palestinian Authority and Hamas. Its relationship with Israel has not resulted in any changes to these positions either.

As for freedom of action in Syrian airspace, it is hard to say whether Israel’s interests would have suffered if Netanyahu had met with Putin a day or two after the election instead of Sept. 12. The one certainty is that Syria will continue to be a major issue one or two years from now.

During the three years in which there has been a Russian presence in Syria, the Israeli air force has enjoyed widespread freedom of action over the country. The two nations agreed on the following policy: Israel could continue to attack Iranian targets without first asking for Russia’s permission, but it will not take responsibility for these attacks. Meanwhile, Russia expected Israel to avoid interfering with the Syrian regime’s efforts to restore control over those territories seized by rebels and opposition groups. Jerusalem accepted this condition without challenging it.

All of that changed in September 2018 when Syria downed a Russian aircraft and its 15 crew members were killed. Reports claim this occurred during an Israeli attack, and Russia blamed Israel for the incident. It responded by deploying S-300 air defense missile systems across Syria —after Israel had managed for years to prevent these aerial defense systems from being provided to Damascus.

Providing Syria with advanced missile defense systems was not enough for Russia. It also deployed electronic weaponry along the coasts of Syria and Lebanon to interfere with the navigation and radar systems installed in fighter aircraft. In June 2019, it was reported that Russia was responsible for interference in the operational systems at Israel’s Ben Gurion Airport, but Russia denied this. If there is any truth to this report, it would mean Russia used its strength to send a message to Israel.

Netanyahu once hoped he could distance Putin from Iran and perhaps even agree on a new deal between Russia and the United States in Syria. Today — after four years and 13 meetings with Putin later, not to mention an unknown number of phone calls — it looks like Netanyahu hasn’t been able to drive a wedge between Moscow and Tehran. The partnership between the two countries in Syria remains as firm as ever despite reports of tension between the different Syrian military units, which are loyal to either Russia or Iran. Iran is a partner in Syria’s war against the rebels, but it is also helping to stabilize the Syrian economy. As of now, it — not Russia — has been investing considerable sums in the country’s economy.

As usual, Russia is cooperating with all the different parties: Syrian President Bashar al-Assad, Hezbollah, Iran and Israel. It is the party that can clip their wings whenever it wants. Israel will have to make do with close cooperation with the Russian military in order to prevent clashes over Syrian airspace and allow airstrikes, even if more limited. The bottom line is that after years of Russian involvement in Syria, Netanyahu’s overarching objective — to keep Iran away from Israel’s borders or even out of Syria entirely — has yet to be achieved.

Meanwhile, back in Israel, Netanyahu’s “Whole Other League” campaign is intended to send a simple message to voters. Prime Minister Benjamin Netanyahu is Israel’s only statesman. There is no one else. Any Israeli who comes home from work and watches the evening news on TV or listens to the news on the radio during the drive home would be unaware of the nuances of Russian policy in the Middle East and cannot remember whether Russia promised to keep Iran 80 kilometers (49 miles) from the border or just 40 kilometers (24 miles).

One of the undeclared purposes of this meeting with Putin was a chance for Netanyahu to get a picture with the Russian leader to feature on the front pages of all the weekend papers and the headlines of all the weekend news shows. This objective was achieved. Furthermore, the media spent the whole day discussing Israel’s relationship with Russia and the serious situation in Syria and Iran. It did not discuss the indictments, corruption, recordings of conversations and all the other legal problems facing the prime minister. Netanyahu can check off this objective too.

Will any of this help Netanyahu in the election? There is no way to tell. By the way, it is worth noting that Putin was rather chilly when he parted from Netanyahu, saying, “It is extremely important to us who is elected to the next Knesset, and we hope they will maintain the friendship between our nations and further strengthen our relationship.” To paraphrase Henry Kissinger, “Countries have no permanent friends or enemies, only interests.”