In the last four years Sochi has become a key Russian decision-making center on issues related to the Middle East; Netanyahu has now come there to have a say. 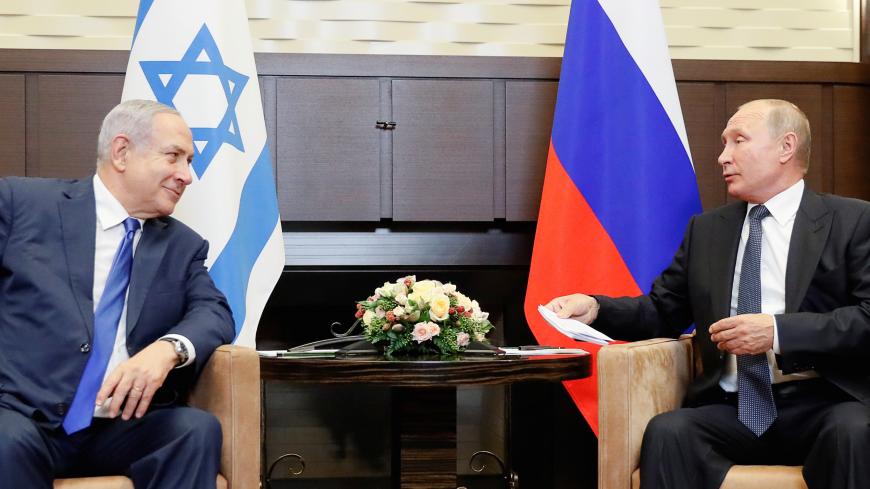 MOSCOW — On Sept. 12 Israeli Prime Minister Benjamin Netanyahu headed for his third trip to Russia this year to meet with President Vladimir Putin. The two previous encounters took place in Moscow in February and April but this time Putin hosted his Israeli counterpart in Sochi — the city that for the last four years have turned into a key Russian decision-making center on issues related to the Middle East.

The meeting had been scheduled some time ago, but two events have somewhat overshadowed the agenda. First, John Bolton’s departure from the position of the national security adviser and, second, Netanyahu’s campaign remarks on the intent to “apply Israeli sovereignty” to the Jordan Valley and adjacent northern Dead Sea — territory in the West Bank that it captured in the 1967 Middle East war and which Palestinians seek for a state.

“We share [Arab] concerns about such plans from the Israeli leadership, the implementation of which could sharply escalate tensions in the region, undermine hope for establishing a long-awaited peace between Israel and its Arab neighbors,” the statement reads.

As for Bolton, before the Sochi meeting the Israeli ambassador to Moscow, Gary Koren, whose diplomatic mission in Russia ends within few days, said Putin and Netanyahu might discuss having a second trilateral meeting of Russia, Israel and the United States at the level of national security councils. Now that Bolton is gone and President Donald Trump will have to name a successor, preparation for such meeting may take a while.

Nonetheless, Netanyahu, who came to Sochi accompanied by the head of the Jewish state’s National Security Council, Meir Ben-Shabbat, and the chief of staff of the Israel Defense Forces, Aviv Kochavi, met separately with the Russian Defense Minister Sergei Shoigu and other senior Russian military leaders. The parties discussed prospects of the deconfliction mechanism established between Russia and Israel in the fall of 2015 following the start of the Russian military campaign in Syria.

Putin well understands the meaning of Netanyahu's visit to Sochi; in fact, he saw this movie some five months ago. In April, the Israeli prime minister came to Moscow five days before the national parliamentary elections to project an image of a foreign policy success and score points with the Russian-speaking Jewish electorate at home. But Putin was then and is now willing to play along.

“Let me be honest, of course we care what kind of people will make it to the Israeli parliament. We expect them to be responsible politicians who will maintain everything we’ve managed to achieve in our bilateral relations over the last few years,” Putin told Netanyahu in his opening remarks.

“I’ll put it straight, thanks in large part to your efforts our relations have acquired new quality both on security issues and military cooperation. Both of us know how important this is, especially given the terrorist threat that is still there,” Putin said.

The Russian president then stressed what he deems one of the pillars for the bilateral relations — “joint historic memory” of World War II — and announced he will be traveling to Israel early next year at President Reuven Rivlin’s invitation to commemorate Holocaust Remembrance Day.

In Israel, Netanyahu was scolded by the opposition for playing domestic politics abroad.

“This is purely electoral visit and has nothing to do with foreign policy or security,” Avigdor Liberman told the Russian Kommersant newspaper. Israel’s defense minister in 2016-2018, Liberman left the Netanyahu government over policy differences on Gaza and is now challenging Netanyahu’s Likud party as a leader of the secular nationalist Yisrael Beitenu party.

“Nobody is going to buy this in Israel. I mean going to Russia few days before the elections for a picture with Putin when just yesterday the Russian Foreign Ministry administered a rebuke to Netanyahu over his statement on the Jordan Valley,” Liberman said.

Netanyahu, however, was bringing a little more than Israeli politics home to Russia. His usual focus on the “Iranian threat” this time was recalibrated to make Putin feel it.

In an interview Netanyahu gave to the RBC, a large Russian media company, before the talks with Putin, the Israeli prime minister said he intended to tell Moscow why it should also see Iran as a security threat — something Russian officials have been little convinced of in previous meetings.

“I'll tell him, Vladimir, the biggest threat to Russia is radical Islam. Today it’s being driven by two forces. [One is] the leadership of [the Islamic State] and its offshoots. But the bigger evil is the radical Shiite Islam manipulated by Iran that seeks nuclear weapons and seeks to conquer the Middle East. The radical Sunni Islam is the lesser evil,” Netanyahu said.

He continued, “At the end of the day, they [Iran] will target their ideology not only at Israel and the West, but also at Russia because their ideology is against our common culture, they want to rule the world.”

Putin made a counterargument of sorts to this proposition later in his opening statement.

"I’ve just returned from one of the North Caucasian republics in Russia, from Dagestan. Twenty years ago they experienced some dramatic events when international terrorist gangs intruded into the republic. So in Russia we know quite well what terrorism is and Israel does too,” Putin said, perhaps alluding to the type of Islamist threat he believes Russia is facing.

On yet another thorny issue between Russia and Israel, strikes on what Israel sees as Iranian targets in Syria, the course appears to continue in its present form.

Netanyahu said, “I won’t allow Iran to say, 'We are going to deploy our army at your back door, put the missiles, drones, militias closer [to your borders] and you just sit there and wait,'” making a case that Israel will continue the strikes not just in Syria, but also in Lebanon and elsewhere.

Foreign Minister Sergey Lavrov briefed the media on the results of the talks. “Prime Minister Benjamin Netanyahu laid out in great detail the security concerns that Israel feels. We agreed to intensify the military-to-military dialogue that’s been going pretty well. Both sides support these efforts. We, in turn, told the Israelis about our own efforts in aiding the Syrian government in its fight with the remnants of terrorists in the Idlib deescalation zone,” Lavrov said.

Most importantly, however, judging by Lavrov’s remarks, it was clear at the talks that Putin pressed for Israeli assistance on what now constitutes a bigger policy priority for Russia in Syria, which is finding funds for the reconstruction of the country.

“We especially accentuated the issue of helping the Syrian government, the Syrian people to return to peaceful life. We stressed the full counterproductivity of the sanctions that the US and European countries introduced against the legitimate Syrian government. I believe we found understanding on these issues from our Israeli partners,” Lavrov said.

Israel is unlikely to lobby Washington or Brussels to repeal the sanctions on Syria. But it seems this is the way Russia is trying to convey to the West what possible windows of opportunity for cooperation exist for those who seek cooperation — especially now that the prospects on joint counterterrorism operations look extremely bleak.