Contrary to expectations, in Moscow Syria was a marginal story while Putin and Erdogan focused on further boosting bilateral ties. 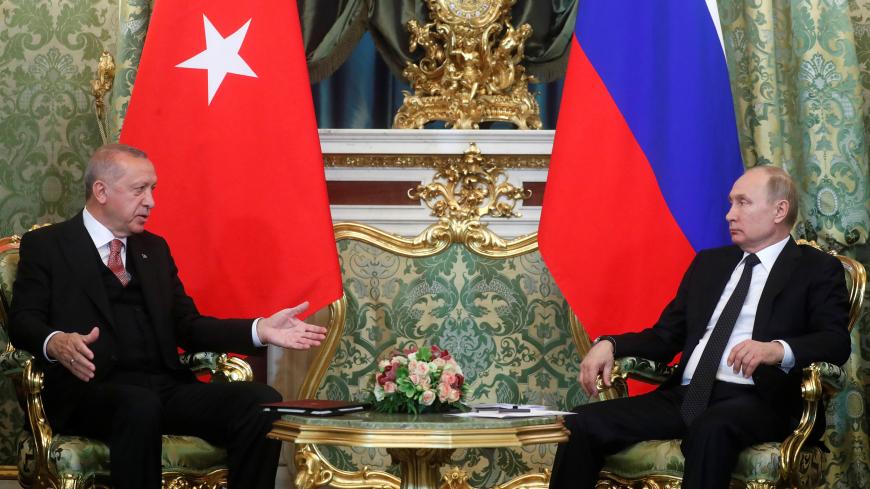 MOSCOW — Turkish President Recep Tayyip Erdogan arrived in Moscow on Monday to meet with his Russian counterpart, President Vladimir Putin, arriving just days after a visit by Israeli Prime Minister Benjamin Netanyahu. If there’s one Middle Eastern leader who meets with Putin more frequently than Netanyahu, it’s the Turkish president. In 2018 alone Erdogan had 13 meetings and eight phone conversations with his Russian counterpart. Netanyahu, meanwhile, had his 13th encounter with Putin since December 2015 Thursday. Last week's visit was Netanyahu’s second trip to Russia this year, whereas for Erdogan this visit was already his third.

The timing and use of the visits are also remarkable. While the Israeli prime minister paid a snap visit before the critical domestic parliamentary election to address the most urgent matters, the Turkish leader went after no less critical local elections on a long-scheduled trip to plan a variety of strategic initiatives. As Netanyahu seeks Putin’s personal boost for the Israeli political campaign, Erdogan eyes ways to ensure that Ankara's relationship with Moscow enables Turkey to grow the regional muscle it has long desired while working not to let ongoing crises with the West to undermine his standing at home.

Against the background of previous contacts that in the last few months have evolved primarily around Syria, this time the visit focused heavily on the bilateral relationship and was comprised of three main parts: reenergizing practical cooperation on various tracks; developing business and trade relations; and cementing humanitarian contacts via the launch of the Russian-Turkish Cross Year of Culture and Tourism.

Putin and Erdogan both praised the current dynamics in bilateral relations, pointing to the 15% increase in mutual trade that is now estimated at $25 billion and setting a high bar for the volume to grow to $100 billion.

“Major projects are being implemented: the Akkuyu power station, which we are to launch by 2023 in accordance with Turkey’s wishes, and the Turkish Stream pipeline with its onshore and offshore legs recently connected,” Putin said.

Amur Gadzhiev, director of the Moscow-based Modern Turkey Research Center, told Al-Monitor, “The negotiations outline some very concrete tasks, including in energy cooperation, military-technical cooperation and many more areas. If you look at who was present in the respective delegations, it’s easy to spot that Moscow and Ankara are serious about taking bilateral relations to a qualitatively new level. They’ve long talked about the strategic nature of the relationship, now it’s for real.”

Gadzhiev, who is also a fellow at the Turkish desk of the Institute of Oriental Studies of the Russian Academy of Sciences, pointed to the importance of mutual gestures between Putin and Erdogan during the visit.

“It was President Erdogan’s first foreign visit after the municipal elections and Putin was among the first to show his support for the Turkish leader. This couldn’t have gone unnoticed in Ankara. In turn, the visit comes at a time of mounting pressure on Turkey from the United States over Ankara’s purchase of the Russian S-400 anti-aircraft system. In response, Putin proposed that Erdogan further deepen the military cooperation between the two states,” Gadzhiev added.

Putin, in his opening remarks at the eighth session of the High-Level Cooperation Council, said, “Our countries have major goals in strengthening defense cooperation. First of all, this concerns completing the implementation of the contract for the supply of the S-400. ... Also on the agenda are other promising projects related to supplying modern Russian military products to the Republic of Turkey.”

The buzzword at the session was “mutually beneficial.”

When Putin and Erdogan proceeded to another Kremlin hall to meet with members of business communities from the two states, the Russian president sought to impress them with numbers.

“In 2018, trade in [the agriculture] sector was up 7%, reaching $3 billion. Mutual investment stands at about $20 billion. Today, the Russian Direct Investment Fund will sign an agreement with the Turkish sovereign wealth fund on creating a joint investment platform of $1 billion to be invested in promising sectors of the two countries’ economies. … There is also potential to develop cooperation with the Republic of Crimea. Vacant niches are being quickly filled there, including by foreign investors,” Putin said.

Erdogan echoed the sentiment, “Expanding our dialogue with Russia has been very beneficial for us. Ever since the 1990s, economic and trade relations have become the driver behind Russia-Turkey relations. … Mr. Putin and I have been considering the idea of working together with the business community for a long time now. … We are ready to provide preferential treatment options for Russian businesses. We are not treating your firms as foreign or Russian investors, but regard them as our own, our local firms.”

The Turkish president also suggested that Moscow and Ankara convert bilateral financial settlements to national currencies “as soon as possible so we can be protected against foreign exchange market fraud.”

The parties discussed prospects for a mutual non-visa regime which, rather interestingly, Putin said can be implemented following the settlement of the Syrian crisis. “Our special services have to work out special parameters on this issue and this work is already in progress,” he said.

For now the parties agreed to a visa-free regime only for holders of official passports.

“If you think that our talks today were all serene and that all we did was praise each other, you are wrong,” Putin joked at the joint press conference with Erdogan.

The two indeed failed to agree on the rate for the Russian gas exported to Turkey as Putin said both Gazprom and its Turkish counterparts insist on “different formulas to calculate the price.”

Perhaps the biggest expectations from the meeting, which concern Syria’s northeast and Idlib, didn’t see a solution either.

Erdogan made it abundantly clear Turkey wasn’t going to put up with the Kurdish forces in Syria’s northeast.

“The YPG and the PKK are as much of a terrorist threat to the region as Daesh,” he said, using the Arabic acronym for the Islamic State. Yet he seemed to have accommodated, at least rhetorically, the Russian idea that the issue should only be settled with “political measures” and with Syria’s integrity as a state intact.

Moscow, in turn, has made it clear it’s not entirely happy with Turkey’s failure to implement the Sochi agreement on Idlib, but Putin made a generous gesture talking about Russia being patient and “understanding all the complications” Ankara is facing.

“Idlib is an acute issue and the Sochi agreements couldn’t be fulfilled but it’s doable. Recently, our defense ministers met to discuss it. We’ve failed to create a joint monitoring center, and it [resolution of the crisis in Idlib] won’t be as fast as we hoped, but we’ll make it happen. We are set to eliminate all terrorist nests, but to switch to the Syrian settlement we need to fix the Idlib issue. This can be done only together with our Turkish partners and that’s the path we’ll pursue,” Putin said.

The talks have crystallized the two elements of Russia’s current approach to Turkey. First, on most issues sensitive to Ankara, Moscow seeks to convey the type of empathy Erdogan doesn’t encounter either with the United States or Europe. Second, the meeting was meant to look beyond the Syrian file to the bilateral relations. Putin’s remarks suggest he genuinely believes that both of the ongoing Syrian security problems — Idlib and the northeast — will be settled soon or later. The clock may be ticking for Syrian President Bashar al-Assad as he seeks to control all of Syria, but Turkey and especially Russia can afford to take their time. When this happens, however, Moscow and Ankara would need some other basis to rely on to keep the mechanism of the relationship functioning. A focus on the ongoing conflicts, as important as it is, somewhat distracts from the strategic direction Putin and Erdogan seek to take the relationship. And the much-debated delivery of the S-400 may be the first serious sign of this course.