How 'complete' is normalization between Russia, Turkey?

Russia and Turkey recently agreed to cooperate in several significant areas, but there's still some question about how far their friendship extends. 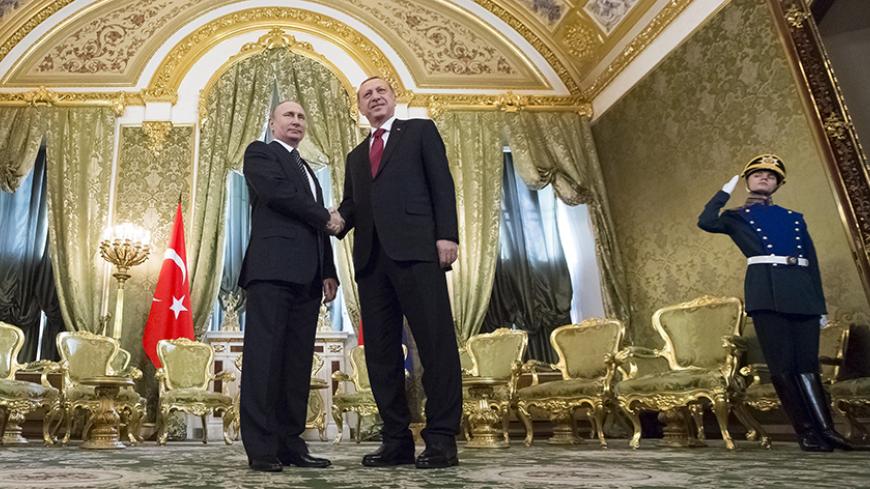 Russian President Vladimir Putin (L) shakes hands with his Turkish counterpart Recep Tayyip Erdogan during a meeting at the Kremlin in Moscow, March 10, 2017.

The presidents of Russia and Turkey say their recent meeting in Moscow produced encouraging results in diplomatic, trade and economic sectors and paved the way for further bilateral cooperation. The event was of special importance, as it marked the resumption of the High-Level Russian-Turkish Cooperation Council meetings for the first time since Turkey downed a Russian jet in late 2015.

The March 10 meeting was largely hailed as a success in the Russian and Turkish government-owned press. Sergey Zheleznyak, of the United Russia Party and a member of the Russian Duma Foreign Relations Committee, said the event exemplifies the “political wisdom” of Russia-Turkey relations. Semyon Bagdasarov, director of the Moscow-based Center for the Study of the Middle East and Central Asia and a popular political commentator on Russian TV, was among a handful of skeptics, saying, “I’m always alert when people are talking about yet-another 'historical visit,' since it tends to end up badly.”

Russian President Vladimir Putin and Turkish President Recep Tayyip Erdogan were accompanied by national delegations composed mostly of ministers and businessmen, all chosen to improve the relationship between the two countries. At the bilateral level, both parties hoped to restore the pre-crisis level in trade and economics. At the final press conference, Putin and Erdogan sounded optimistic about this facet of their relations. The Turkish leader proclaimed, “Moscow and Ankara have totally completed the normalization process.”

Erdogan added, “Even if we don’t come to agreement on all the issues, we continue to leave the communication channels open. Given the trust restored, we’ll continue our cooperation."

Putin said the two agreed that Ankara will create an infrastructure to allow Russia’s national payment system, Mir, to be available in Turkey. The project will be implemented through the Turkish DenizBank. What makes it particularly interesting is that, starting this year, Russians will be able to pay in rubles, while Turks in Russia will be able to pay in liras. Another important aspect agreed upon was to have bilateral trade payments done in the countries' national currencies. In the past, when the Russian ruble and Turkish lira dropped in value, it raised the debts of the governments and private companies. Some of those debts are in international currencies, which puts an additional burden on the governments. Thus, getting some of the trade on the rails of national currencies is seen as a way to help both economies.

Putin reiterated the plans of Russia’s gas giant Gazprom to launch construction by midyear of the two lines of the Turkish Stream, each with a capacity of 15.75 billion cubic meters (556 billion cubic feet) of natural gas per year.

The men also discussed another important business project — construction of the $20 billion Akkuyu nuclear power plant. The two leaders said there is good impetus behind the initiative, which is scheduled to begin operating by 2023 and in which Russia has already invested about $5 billion. However, a problem they don't talk about is that Turkey seems to lack qualified experts to service the facility, and Russia’s nuclear power plant builder Rosatom lacks funding for the project.

Moscow and Ankara also agreed that 2019 will be a year of cross-culturalism and tourism for the two states. The return of Russian tourists to Turkish resorts, which has recently become a trend again, is something Ankara wants to sustain. Putin mentioned that respective Russian and Turkish departments are tasked with expanding security measures for Russian tourists. Erdogan emphasized that Turkey is still waiting for Russia to repeal the visa requirement for Turkish citizens that was introduced after the jet crisis in late 2015.

Lifting sanctions was among the top objectives for Turkey at the talks. Last year alone, an export ban for Turkish goods and food to Russia caused Turkey’s economy a $550 million loss. As a token of political courtesy, days before Erdogan’s visit to Moscow, the Russian government repealed the ban for some Turkish agricultural products, but there’s a long way to go. Moreover, there are still legal limitations for Turkish nationals to work in Russia, even when the employing companies belong to Turks. The head of the Russian-Turkish business association complained that many Turkish companies are struggling in Russia, even though they have created as many as 100,000 jobs there. Answering a question from a Turkish journalist on the issue, Putin felt the need to encourage Ankara, saying, “This ban will be lifted … in the near future. After today’s conversation [with Erdogan], this is [just] a technical issue.”

Erdogan voiced expectations about renewing contacts in the defense industry, which boosted rumors about the sale of Russian S-400 long-range air and missile defense systems to Ankara. But despite Russian high-level officials making all sorts of statements over time, the deal has never materialized, for two major reasons. First, Turkey's NATO membership restricts some deals with Moscow. Second, if delivered, S-400 systems could potentially limit Moscow’s own maneuvers in Syria and those of Syrian President Bashar al-Assad's air forces — something Russia should and does take into consideration for the long run.

The meeting was nuanced regarding foreign-policy issues. The presence of Turkish Chief of General Staff Hulusi Akar — who was part of the group and who had hosted four days earlier his American and Russian counterparts in Antalya — made it evident that a lion’s share of the Putin-Erdogan meeting focused on Syria.

However, when asked about the issue, the two leaders placed emphasis on different aspects. Putin insisted that a joint military and intelligence operation will be expanded, with the Islamic State (IS) being a prime target. Erdogan listed among Turkey's serious security challenges the Kurdish People's Protection Units, the Gulen organizations and Jabhat Fatah al-Sham (Conquest of Syria Front, formerly Jabhat al-Nusra). However both Moscow and Ankara see their negotiation efforts — along with Iran — on the political process in Syria as critical. Both also reiterated their commitment to Syria’s territorial integrity, with Putin calling it “a precondition” to any further initiatives on the country’s future and Erdogan promising that “Turkey won’t tolerate its partition.”

Probably the thorniest issue of dealing with the Kurds remains a “hidden agenda” and neither leader, rather expectedly, voiced any specifics. In a conversation with Al-Monitor, Russia’s Middle East experts were almost unanimous in their assessment of Erdogan’s major objective: to put an end to what Ankara calls a Federation of Northern Syria, a territory under Kurdish control. Referring to his sources in the Russian Foreign Ministry, a notable Russian specialist on the region, speaking on condition of anonymity, mentioned that there is an understanding that despite the pressure from Erdogan, cutting ties with Kurds is not in Russia’s interests.

“If Moscow abandons the Kurds now, it will reinforce America’s position. They [the US] have already secured some of northwest Syria with their own military infrastructure. It will also allow Turkey to seize further control of the Syrian territory.”

Ironically, the day after the meeting, Russian media outlets were racking their brains over what to make of the reported news that Turkey cut ferry services with Crimea, virtually halting the delivery of Turkish goods and food to the peninsula. The major storyline seems to be that Ankara is trying to trade some political preferences for the West, showcasing that it has a card to play in what has become a sensitive point between Russia and the West.

Commenting on the presidents' meeting and the news on what some are calling “the Crimea blockade,” a Russian-Turkey watcher close to the Kremlin told Al-Monitor, “The current trend is definitely toward a warming of the relations because both objectively need each other. But it’s still early to talk about a comprehensive partnership.”