Turkey anticipates even deeper ties with Russia as the two countries embark on massive development projects and a major military contract. 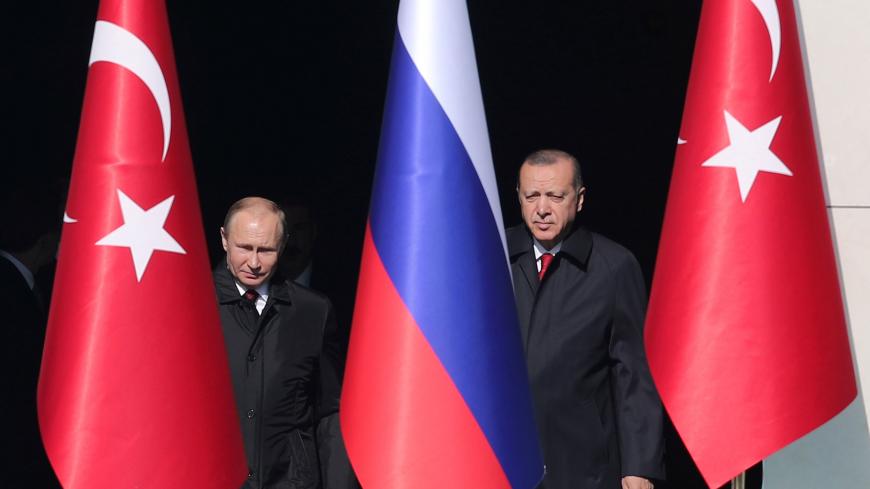 Russian President Vladimir Putin, joined by ministers and representatives of various Russian companies, visited Ankara this week with a busy agenda. He and Turkish President Recep Tayyip Erdogan discussed their bilateral gas pipeline project and held a groundbreaking for the Akkuyu nuclear power plant in Turkey’s Mersin province, and there were multiple ministerial meetings within the Russia-Turkey High-Level Cooperation Council.

Putin received a majestic welcome on his arrival April 3. Turkey is the first country he visited after his re-election March 18, which many in Russia and Turkey viewed as an expression of deep respect for Ankara.

Energy and military cooperation dominated the program of the presidential and ministerial talks. The meeting of the High-Level Cooperation Council culminated with dozens of agreements being signed. The Russian Direct Investment Fund signed a co-investment agreement with Turkey’s Sovereign Wealth Fund. Corresponding agencies of the two countries signed memorandums of cooperation in information technology, physical fitness and sports, social policy, and the rights of women, families and children. The countries discussed designating 2019 as a cross-cultural year.

The visit centered on the $20 billion Akkuyu nuclear power plant on the Mediterranean. The two leaders witnessed the groundbreaking via videoconference, with both emphasizing the project's importance for Turkey’s economic development and energy security, and for further bilateral cooperation.

“The significance of this great innovative project is hard to overestimate,” Putin said. “Today we are not simply present at the construction of the first Turkish nuclear power plant, but we are witnessing the laying of the groundwork for Turkey’s nuclear industry. We are creating a new industry.”

Russia’s president called the cooperation in nuclear energy a strategic partnership. Erdogan said the groundbreaking was a “historic event” in Turkey's energy development and in the energy cooperation between Moscow and Ankara.

The Akkuyu construction agreement was signed in 2010. It will be the first nuclear power plant in the world built using the Build, Own, Operate project financing model. Moscow will finance the project and operate the plant. The first reactor is supposed to be ready by the centenary of the Turkish republic in 2023, and Putin said it will open on schedule, though the project has faced some delays.

The leaders also discussed the Turkish Stream gas pipeline, another Russian-Turkish mega energy project. During a joint press conference, Putin reassured listeners that the work is proceeding on schedule and Russia will soon start implementing the line's onshore segment. According to him, the project will not just bring gas to the Turkish market and other countries in southeastern Europe, but will also “enhance the energy security of the region as a whole.”

The presidents announced remarkable progress on the controversial deal for Turkey to purchase Russian S-400 Triumf anti-aircraft weapons systems. Both sides confirmed they discussed implementing the contract, agreed on the price (previously estimated at $2.5 billion) and decided to accelerate delivery to July 2019 instead of 2020. Most importantly, Putin said the technology transfer is a “purely commercial issue” to be decided between economic entities. “There are no military or political considerations or limitations in this sphere,” he said. Moreover, Moscow and Ankara are now discussing additional projects in military technical cooperation.

The meeting in Ankara took place amid a new surge of tension between Russia and the West over allegations of Russia’s involvement in the so-called Skripal case — the nerve-agent poisoning of former Russian agent Sergey Skripal and his daughter in the UK last month. The United States, UK and several EU countries have already expelled scores of Russian diplomats, with Moscow retaliating proportionally to each. NATO announced it is cutting the size of its Russian mission by a third.

Turkey, a NATO member state since 1952, refused to “express solidarity” with the UK and other NATO colleagues. On March 26, Turkish Deputy Prime Minister Bekir Bozdag said Ankara will not take any actions against Moscow.

“There [are] currently positive and good relations between Turkey and Russia. In this sense, Turkey is not planning on taking any decisions against Russia,” Bozdag said.

Russian experts think the confrontation with the West and Turkey’s independent standing on the Skripal case will push Moscow to intensify its contacts with Ankara.

“If we look at the worsening of the relations with Western countries, we will see that Turkey is one of a few partners we have,” Yuri Mavashev, a senior political researcher at the Center for Modern Turkish Studies, told Moscow news outlet Gazeta.

Ilshat Saetov, a research fellow at the Russian Academy of Sciences' Institute of Oriental Studies, agrees.

“There are not so many options for Russia against the background of confrontation with the West," he said. "Although Turkey has been a historical rival to Russia, the countries are largely complementary in terms of the economy.”

Even critics of Russia recognize that the ongoing developments between Moscow and Ankara are a signal the two states are seeking stronger ties. Sergey Korsunsky, Ukrainian ambassador to Turkey from 2008-2016, described this Putin-Erdogan meeting as the confirmation of unprecedented rapprochement between Russia and Turkey.